Bamfs appear in Wolverine & the X-men comic. But I can't find a single scrap of evidence for their origins on the internet.

Where are they from?

Edit: I'm increasingly convinced that when Professor Xanto Starblood uses the term BAMF he doesn't mean Bamf, but is using an acronym. As such the current answer doesn't answer the question.

UPDATE: Amazing X-Men #4 gave the confirmation straight from the horse's (Nightcrawler's) mouth. Looks like my theory in the original answer was pretty spot on.

When BAMFs saved Bobby (Iceman) and he saw Kurt, he asked Kurt "You can start with all these BAMFs. What the hell are they"? Nightcrawler replied:

Isn't it obvious? Don't you see the resemblance? They are my flesh and blood. They are all my little brothers.

Upon snide remark by Bobby about Azazel's clearly having been busy, Kurt clarifies:

Though the BAMFs didn't begin life as my kin. They were born in the depths of hell.

Their mother was a giant maggot. Their father a changeling in the form of a face-eating lamprey. It was love at first sight, I'm sure

The babies were forgotten, as soon as they were born. Left to die on the brimstone plains.

But there they lived. There they survived, in the very shadow of the Pandemonium, as scavengers, as gremlins, as things lower than the lowest beast of the Pit.

And it was there my father found them. On one of his raids.

He found them starving, living off the scabs of the damned and the devil's sewage. And so...

He fed them all the blood they could swallow. His blood.

Which changed them, remade them in his image, bound them to his evil will.

... and he explained his involvement with them:

... "And that's where I came in. I found one of Azazel's little red soldiers left behind in heaven. And I made him a deal of my own.

A deal my father could never match. ...

When Firestarter questioned how he turned them from red to blue (since he has no blood to give them, being dead), Nightcrawler said they didn't have time for more explanations since they must rush and find the rest of X-Men. All he said was

It wasn't my blood that I promised them.

TL;DR: They seem to be some sort of Hell creatures/demons originally created by or affiliated with Azazel (who's a Marlvel equivalent of Satan); and who currently (in 2013 comics) serve Nightcrawler - (Azazel's son, a recently deceased X-Men mutant).

*Note: this answer mostly is based on "Wolverine and the X-Men" storyline; and does NOT cover all of the ongoing new sequel series "Amazing X-Men Volume 2", which also features both blue and red Bamfs and most likely may contain further details about them beside those I mentioned below.

The reason there is confusion is that there are at least 3 different types of things referred to as Bamfs in Marvel storylines:

Bamfs appear to be small versions of Nightcrawler, who even wear a costume identical to his classic costume. 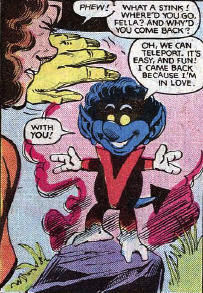 They were actually called Bamfs, not Bamflings which migh have been why you couldn't find them on the interwebs. But the origin you are looking for is Uncanny X-Men #153.

It was revealed in last month's Wolverine and the X-Men #7 that the creatures at the Jean Grey School for Higher Learning (including the faculty and students) think that everyone who is a Bamfs are actually something else entirely. What they actually are has yet to be revealed. Professor Xanto Starblood stated,

"Bamfs. Ms. Pryde thinks you're Bamfs. I wrote my college thesis on the migration patterns of interdimensional gremlins. I've seen Bamfs. I've studied Bamfs. You, my friends, are definitely not Bamfs. You look more to me like--"

Starblood was then attacked by Krakoa before he could finish his sentence.

They may be boggies which were introduced in Nightcrawler's first mini series by Dave Cockrum. Chances are, though, that they're a third option in between but unrelated to those two.

Not the answer you're looking for? Browse other questions tagged comics marvel x-men wolverine-and-the-x-men or ask your own question.

16
What are the upper limits of Cyclops' Optic Blast?
6
Why are Wolverine and Kitty Pryde headmaster and headmistress?
7
What are Rachel Grey's facial marks?
3
Havoc and Cyclops current fox franchise of X-Men
27
What timeline is the post-credit scene at the end of The Wolverine in?
4
How do Xavier's leg braces work in Wolverine & The X-Men?
7
What is Wolverine's immigration status in the USA?
9
What is the first time Wolverine cuts someone with his claws in a real way?