Why are monsters usually designed this way?

Why are most monsters in scifi movies designed with a big mouth and a loud scream? It seems all monsters open their mouth and scream before attacking. Can't something be scary without screaming?

All fictional monsters have archetypes in reality. If you look at what beasts we find in real life, you'll see that most of them roar or scream when trying to intimidate an enemy. Lions, bears, wolves and domestic dogs and cats even open their mouths wide in an attempt to ward off other creatures.

Since creatures in SciFi/fantasy don't exist, most authors need to draw from some form of reality to get an emotional response from their audience. And since the most fearsome creatures that do exist have a "monster scream", then the author can expect the same fearful response from their viewers when the made up creature has its own "monster scream"

In Indipendence Day (movie), the bad aliens don't have mouths and communicate telepathically (so the horrible scream that paralyses the poor men in terror as a kind of psychic attack is delivered telepathically...).

Just a quick and easy alternative... in Aliens, instead, they made monsters without eyes.... all cheap tricks to make them scarier...:-)

Q1: Most monsters in Sci Fi shows/movies roar scream or yell to instill fear in the targets. Some of them are sucessfull causing the characters of the movie to forget their surroundings and fall or trip or something. Most monster sci-fi movies have these types of monsters.

Q2: Yes monsters can still be scary without having to scream. For example, in the Predator movies, you don't see the Predator do a warriors call to catch the prey, it just catches it.

The xenomorph designed by Giger for Alien (and its successors) is usually not screaming(his victims do this for him!). But it has a large mouth. 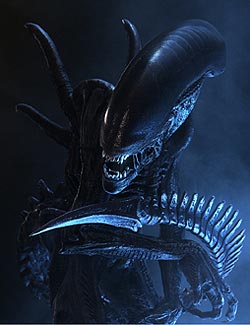 May be this is the reason it is one of the most famous and creepiest monsters?

Agreed that the mouth is large, however I think personally the size is only a minor fact and the most frightening thing is the design of its "double mouth".

I add two pictures of the skull for better seeing the size of its jaws.. 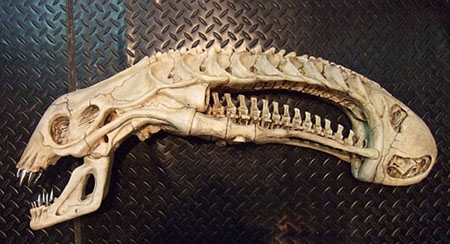 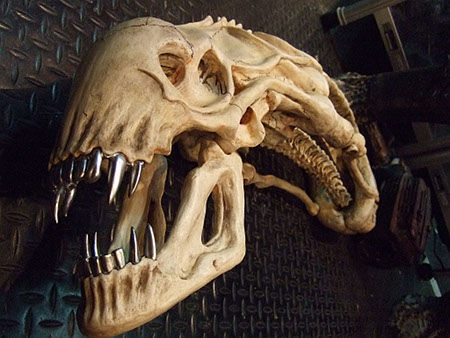 Not the answer you're looking for? Browse other questions tagged aliens magical-creatures or ask your own question.

25
Why COULD Harry see Thestrals following Cedric Diggory's death?
14
Name of short story told from perspective of mechanical alien?
14
Help me identify this B-movie about plant-like aliens that crash land
13
Is it ever explained why Harry has to cage Hedwig when he travels?
7
Woman who gets trained by a soldier; dead soldier returns as a ghost; bird/raven people
11
Movie where in the end, a guy has to manually detonate a nuclear bomb to destroy aliens
7
Romance book about a shapeshifting unicorn and a shapeshifting dragon
3
80s or 90s movie with evil genie and kids?
8
Old horror/scifi/monster movie with a Bigfoot-sized monster that has red vision and attacks a woman through the floorboards