Find a (short?) story about time travel and wasted talent

I seem to recall that the story was in a book with a blue cover and something clever was done with the way the author's name was written.

The style of writing seemed a bit abrupt to me. In the story, a writer is signing books or something when for some reason he meets someone that should be great(?) and isn't somehow so he sticks him in a time machine and brings him back in time so his young self can see him. I think I was indignant that he killed himself because that should cause all sorts of problems with timelines but didn't.

There was this whole tirade about how the guy who wasted his talent could move countries with his writing(?) and how he was really good and then just disappeared.

I'm pretty sure I read it around 5 or 6 years ago (2010 or so) although I don't think it was new when I read it. It's not "Forever and the Earth," I think, since only two people were described as travelling in time (unless this was some sort of spin-off of it).

Can you find this story for me?

This looks like "Quid Pro Quo" by Ray Bradbury.

He does meet this wasted talent guy while signing a book:

Santa Barbara. A small bookshop, and my signing a small novel for an even smaller group when the explosion occurred. Which hardly describes the force with which it slammed me back on my inner wall.

It began when I glanced up and saw this old, old man swaying in the doorway, dreading to enter. He was incredibly wrinkled. His eyes were broken crystal. Saliva brimmed his trembling lips. He shook as if lightning struck him when he gaped his mouth and gasped.

and rails that he should have been great:

“Shut up! God, you stupid nerveless monster, what have you done to that fine young man?”

“What fine young man?” the old, old one babbled.

“You. You. You were the genius. You had the world by the tail. You wrote upside down backwards and it all came right! The world was your oyster. You made pearls. Christ, do you know what you’ve done?”

“Yes! Nothing! And all you had to do was whistle, blink, and it was yours!”

Drags him into a time machine:

Swiftly, I hit the tabs: year/month/day/hour/ minute; and just as swiftly: state/town/street/block/ number; and yanked the backward/turn/backward bar. And we were off, dials spinning, unspinning suns, moons, and years until the Machine melted to silence.

And shows him his younger self, who (and perhaps mixed up in your memory) kills the older version of himself (which only creates the usual time travel paradox, and then only if the younger man doesn't forget all of it and lead exactly the same life):

“Who are you really?” he said at last.

And struck a blow to the older man’s face, and then another and another and the old, old man stood in the rain, the downpour of blows, eyes shut, drinking the violence, until he fell on the pavement with his young self astride him staring at the body.

It was collected in "One More For The Road", which, at least in one printing, was a blue book and something arguably clever was done with his name on that cover: 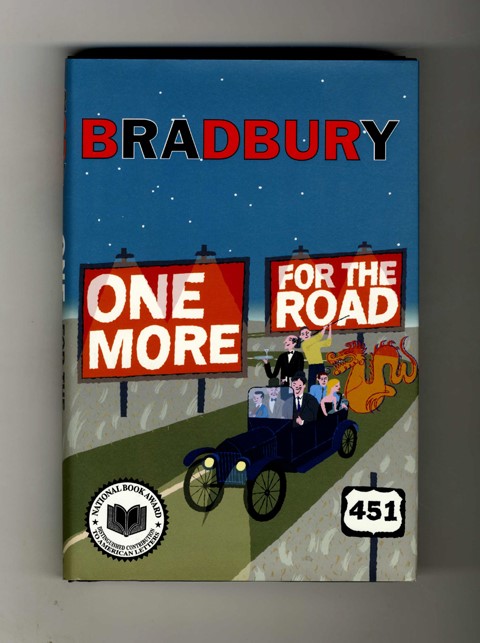