Is Gimli really 60+ years old in Lord of the Rings?

In The Desolation of Smaug, when the Dwarves get captured by the Mirkwood Elves, Gloin shows Legolas a picture of his son, Gimli.

But if you look at Bilbo Baggins, he is about 30-40 years old at that time, and somewhere in the Tolkien trilogy it is mentioned that he keeps the One Rings in his possession for about 50-60 years and then he passes the One Ring to Frodo Baggins when it is around his 100th birthday.

That would mean that Gimli is well over 60 years old when he is at the council of Elrond in Rivendell.

Does that make sense? Or do Dwarves age differently as well, like Gandalf?

The year of Gimli's birth is given in Appendix A, in the family tree for the Line of Durin, as 2879 of the Third Age (click to embiggen): 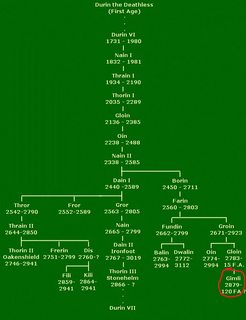 Appendix B gives the date of the Council of Elrond as October 25, 3018.

So Gimli is actually almost 140 years old when we first meet him, and is certainly that age by the end of the trilogy.

So yes, in general, Dwarves live longer than humans do. Tolkien nowhere specifically discusses their lifespan, but we can look at the dwarves whose ages we know (which is basically just the people in that family tree), and see that most of them hover around 250 years:

Such a limited sample size makes it difficult to say anything intelligent about dwarvish lifespan, but it's clear that it isn't unusual for a dwarf to celebrate his 250th birthday.

Gimli himself, it may interest you to know, left over the Sea with Legolas when he was 262; we don't know how long he lived after that point.

It's worth remarking that this may or may not be true of the films, which notably condensed the timeframe in some places (in particular, they almost certainly removed the 17-year gap between Bilbo's Party and Frodo setting out for Rivendell).

From a purely cinematic context, there's ample evidence dwarves enjoy an extended lifespan, at least compared to humans; in An Unexpected Journey, we're told that Smaug's attack on Erebor took place at least sixty years before the events of the film:

Thorin: The dragon Smaug has not been seen for 60 years.

We see this assault in flashback in the prologue, and we see that Thorin, Thráin, and Balin are all present at this event, and all appear full-grown. They're evidently substantially older than sixty in the film trilogy, though we don't know their true ages2.

As well, Gimli in Fellowship has every expectation of meeting Balin in Moria, sixty years after the events of The Hobbit trilogy:

Gimli: So, master elf, you will enjoy the fabled hospitality of the dwarves; roaring fires, malt beer, red meat off the bone. This, my friend, is the home of my cousin, Balin.

It's clear that Gimli hasn't been in contact with Balin recently (the dwarf-corpses are all old, decayed, and cobwebby), but the fact that he expects Balin to be alive and capable of ruling a city after well more than 120 years (Balin clearly wasn't young, even in the prologue to An Unexpected Journey) is telling.

Although we don't have enough information to deduce Gimli's age in the context of the film, clearly sixty years is far from unreasonably old, and may even be rather young. Still, every source cited above would have been legally available to Peter Jackson to use in his films, so 140 stands as a fair guess.

1 We don't know precisely when the Dwarves first awoke, but the first reference to them in Elvish histories is about YT 1250, in the Years of the Trees3, so he must have been "born" before that time. His death is given vaguely in Appendix A as "First Age", meaning he died sometime between YT 1500 (the final Year of the Trees) and FA 590. Because the Years of the Trees reckoned years differently than the Years of the Sun, this puts a lower bound on Durin's age at 2395 solar years

2 I'll remark at this point that the birth years for all three are present on the tapestry Bard consults in Desolation of Smaug; though they aren't visible in the film, you can see them in the prop replica sold by Weta on their website. Although we may be able to use these dates to get a better estimate of the character's ages, I'm hesitant to do so; as I've remarked before, there's not necessarily much interaction between the writers and the propmasters, so there's little indication that these dates are anything more than Easter eggs.

If you're curious, the dates on the tapestry agree with the dates in Appendix A, shown in the image above.

3 Though some earlier drafts put their first meeting in the First Age, which would lower that lower bound quite considerably

Not the answer you're looking for? Browse other questions tagged tolkiens-legendarium the-lord-of-the-rings the-hobbit age or ask your own question.

60
Why do people say that Peter Jackson can not make LOTR/Hobbit sequels?
26
Do the dwarves grow weary of Middle-earth
19
How soon after Frodo leaves Middle Earth, do Gimli and Sam leave?
18
What does the “stain on the moon” in the Song of Durin refer to?
12
Why would Bilbo agree to arbitration in the Khuzdul language?

62
Was Gimli the last of his race?
22
Why does Frodo appear in Peter Jackson's The Hobbit?
10
Who are the rest of members at Elrond's Council?
10
How is Gimli from Lord of the Rings connected to the dwarf in The Hobbit?
37
Did J.R.R. Tolkien ever write a deeper connection between The Hobbit & Lord of the Rings: Fellowship of the ring?
17
Why do Gloin and Legolas not interact?
18
How could Gimli strike the Ring
50
Did Frodo and Gimli ever discuss the adventures of Bilbo and Glóin with each other?