Book about aliens arriving in an old country; people capture their spaceship and arrive at alien's planet

I'm searching for a science-fiction book set in the quite an old time: around the 15th-16th century. Features aliens arriving in a spaceship to an old country: likely a western country from what I remember.

Here are the details that I can remember:

I'm pretty sure the ending is where a few years later, the people trapped on that planet manage to get back home.

One interesting part to note: when the people captured the spaceship they named it. I can't remember the name but it likely has an '-ade' at the back. Something like 'Invade' along the line.

I just remembered reading the book recently after reading 'War of the Worlds' - another alien scifi book; any help is appreciated!

story-identification books aliens
Share
Improve this question
edited May 18 '17 at 14:04

Sounds like Poul Anderson's The High Crusade. Quoting the summary:

Sir Roger formulates a plan that with the captured ship, he can take the entire village to France to win the war, and then liberate the Holy Land. The townspeople, with all of their belongings, board the ship at the baron's instruction, and prepare to take off. The people of Ansby are mystified at the advanced technology aboard the ship, which they come to call the Crusader. Being unable to pilot the Crusader Sir Roger directs the surly Branithar to pilot them to France. Instead, the alien wrecks the baron's plan by throwing the Crusader into autopilot on course to Tharixan, another Wersgor colony.

The Crusader arrives at Tharixan in days, and Sir Roger learns of this new world: it is sparsely-populated, with only three fortresses, Ganturath, Stularax, and Darova (the chief base). The humans capture Ganturath but destroy the Crusader in the process. Word spreads of the invaders and a meeting is arranged between Sir Roger and his soldiers and the chief of Tharixan, Huruga.

The cover I remember from the 80s and a more recent one (taken from Goodreads): 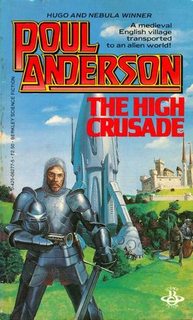 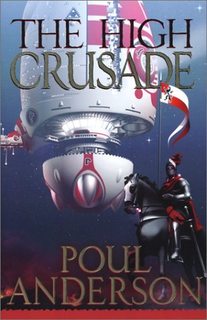 8
A story I read in about 1986: A boy meets an alien, his mind is wiped afterward
8
70s novel about government faking an alien invasion
13
Short story about aliens who invade Earth and are baffled by the climate
11
need help finding the name of a book about psychic powers, aliens, and brain in a vat type plot
8
90s sci-fi book about humans on a alien reserve; one man escapes and returns to liberate his people
23
Sci fi book, man buys a beat up spaceship and intervenes in a civil war on a planet and eventually becomes a space cop
7
Sci-fi book series with modern Arthurian legends with Excalibur as a spaceship