I read this series in early-2000s (I'm not sure how old or new it was when I read it at the time), borrowed from the local library. Looking back it was probably just teenager-aimed, but was still really good (well, for an early teenaged-self at the time). Wouldn't mind reading it again, see if it's as good as I remember it... I think it was at least three books long.

I remember several details about the book series, but not more than the details. Still, spelling out the details I remember here, hopefully someone can help me.

Maybe I'm just daft (it's entirely possible), but even with all these points I remember, I still haven't been able to lock down the exact series by myself... Anyone? 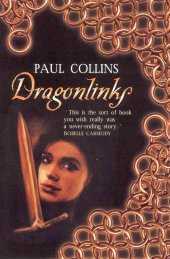 This is the Jelindel Chronicles, by Paul Collins. From the Goodreads description of the first book, Dragonlinks:

An all-powerful, enchanted mailshirt from the stars. Six links are missing. An orphan, a streetwise urchin and a swordsman must find the links before the greatest evil known descends upon Qzar. Jelindel dek Mediesar led a charmed life until lindrak assassins murdered her family. Fleeing to the markets Jelindel dresses as a boy to avoid detection. Here she teams up with Zimak, a street-wise urchin, and Daretor, a warrior on a quest to destroy an alien artifact. Murder, betrayal and deceit are just some of the hurdles they must face in order to find the missing links from a star-dwellers’ mailshirt six powerful links, whose individual powers are nothing compared with that of the complete mailshirt.

We have the all the main elements right there.

Not the answer you're looking for? Browse other questions tagged story-identification magic medieval or ask your own question.

9
Series: Female half-demon/half-angel paranormal P.I. sends demons back to hell
9
Trying to find a book series from late 90's to early 2000's or just early 2000's
12
Teen/YA book about a knight and dragons
7
Book series with people transported through time by magic
7
Book with female explorer on an alien planet, seduced by pitcher-plant and almost eaten
32
Manga about a female worker who got dragged into another world together with this high school girl and she was just told she's not needed anymore
17
Series about female warrior in Arthurian-like medieval Britain