I am looking for an old scifi movie, described in the title. I watched it a few years in 2009 (I think) when I was looking for scifi movies to rent (Watched in English). The plot is on some aliens getting trapped on earth and later, to survive, they disguise themselves completely as humans.

When aliens come to civilisation, one 'real' human spies on the human-disguised aliens. Also a magical pool that gives these aliens energy or something related. This pool is able to make people young again (sortof like a healing Fountain of Youth).

Can't remember anything else, details a bit hazy, but the ending is probably where the humans help the aliens return"" Thank you in advance if you can remember this! 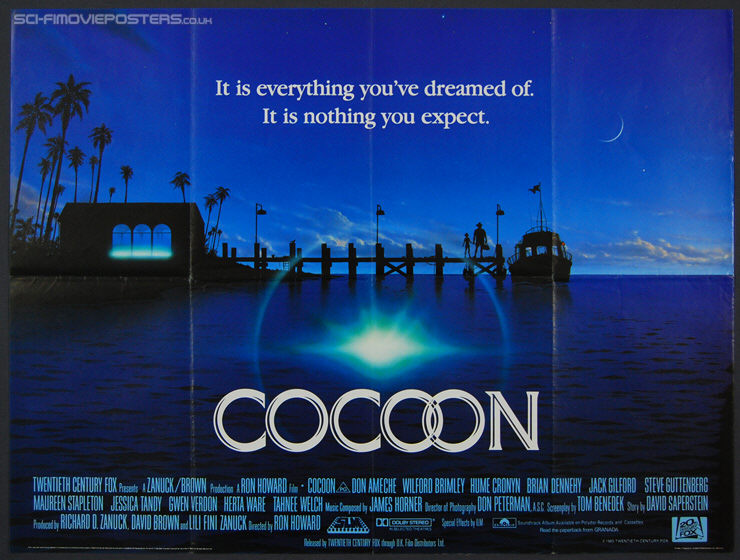 From Wikipedia, we have the aliens disguising themselves as humans:

About 10,000 years ago, peaceful aliens from the planet Antarea set up an outpost on the planet Earth, on an island later known to mankind as Atlantis. When Atlantis sank, twenty aliens were left behind, kept alive in large rock-like cocoons at the bottom of the Atlantic Ocean. Now a group of Antareans have returned to Earth to collect them. Disguising themselves as humans, they rent a house with a swimming pool, and charge the water with “life force” to give the cocooned Antareans energy to survive the trip home. They charter a boat from a local captain named Jack, who helps them retrieve the cocoons. Jack likes Kitty, a beautiful woman from the team who chartered his boat. When he spies on her while she undresses in her cabin, Jack is shocked when he discovers she is an alien. After the aliens reveal themselves to him and explain what’s going on, he decides to help them.

And the people swimming in it and becoming youthful:

Three of its residents, Ben, Arthur, and Joe, often trespass to swim in the pool next door, thinking the house to be unoccupied. They absorb some of the life force, making them feel younger and stronger. Eventually caught in the act, they are given permission to use the pool by the Antarean leader, Walter, on the condition that they do not touch the cocoons or tell anybody else about it. Rejuvenated with youthful energy, the three men begin to let the advantages of the pool take hold as they are relieved of their ailments (such as Joe’s cancer miraculously disappearing and Ben’s vision becoming clear, allowing him to be able to drive a car once again).

14
Alien experiment B movie
2
Scifi TV Show which had the common "Aliens invading the world" sort of setting?
9
What was the name of the tv show about a guy who lives in a town with aliens disguised as humans?
9
Anime movie about space aliens and robots
8
Movie: astronauts visit a Mars-like planet with aliens passing as humans, alien embarks the ship, which destructs before landing on Earth