I'm looking for a book that I think I read about five to ten years ago. It was a fantasy graphic novel, in a fairly classic comic book style and kind of a dark premise. The title may have been the name of the world the story took place in. It was about a boy, maybe eleven or twelve, who got into a some sort of car accident or something near his house, and was in a coma. I remember there was a punk rock kid who I think hit him with the car because he hated him, and the punk kid may or may not have also been in a coma. I don't think we found out about that till the end of the book though.

While he's in a coma, the kid creates this world in his head. The character's I remember are (I think): a large guy, kinda beastly, a classically handsome pirate-esque guy, and a woman who looked like Esmeralda from Disney's Hunchback of Notre Dame. I can only remember a few details of the plot, but I do remember there was a love scene or something between the main hero and the woman. There may have been a flying ship, there was a chase scene in a town (I think) too.

This sounds like Tellos. It had a lot of hype going in and I enjoyed it but ended sort of quickly after the coma/metastory reveal. I believe the writer died, so doubtful we'll see more. Some covers showing the cast: 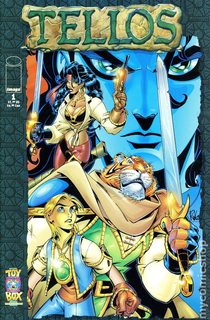 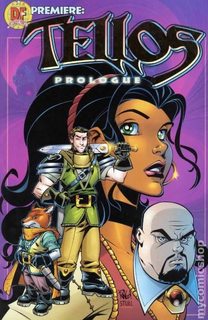 There were definitely flying ships and probably multiple city chases. Not sure if the romance was between the kid (Jarek) or the "pirate-esque" guy (Hawke). I can dig my copies out if you need me to find anything specific.

3
Kid in a car accident goes into a coma, gets transported to a different land, has to fight sister's boyfriend for his life

10
Been trying to find graphic novel for decades - at least I think it's a graphic novel
7
Graphic novel with redheaded girl at a magic boarding school
5
Trying to find a book about a girl in a coma?
10
Looking for a French adventurer-lady graphic novel (kinda sexy and gory)
9
I'm trying to identify a sci-fi graphic novel set underwater
4
Comic/graphic novel series about 4 kids traveling to a parallel world
7
Sci fi novel about a civilisation on a planet between Mars and Jupiter and how it destroyed forming the asteroid belt