Did Batman ever copy himself to fight an enemy, and trick that enemy into doing the same?

It happens in the episode "What is reality" . Commissioner Gordon gets captured in the virtual world by Riddler. There's puzzle cube he has to solve. Batman knew he couldn't solve the cube in time, so he multiplied himself predicting Riddler would do the same, on the assumption that he could not sustain a collective consciousness and the entire virtual world; destroying the cube and letting Batman and Commissioner Gordon escape. More details here.

It starts at 2 minutes 24 seconds at this video here:

I don't know that he copies himself, but there was an episode that otherwise fits: His Silicon Soul. Batman stops some guys from robbing a warehouse, but gets hit in the process... and realizes he's a robot

Although injured, the fake Batman makes it to Wayne Manor and explores the estate. Alfred catches him and is fooled for a moment. However, when he sees the circuitry he realizes that what he's seeing is one of Karl Rossum's duplicants. Though the robot recognizes him and appears to be docile, Alfred is frightened.

Turns out he's a HARDAC replicant. A robot implanted with Bruce Wayne's memories.

Eventually HARDAC takes over and makes the robot turn the Batcave computer into a reborn HARDAC. The real Batman shows up to stop him 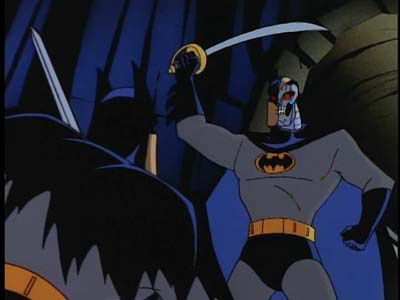 During the fight, the robot thinks he's killed the real one. Overcome with remorse, he smashes the computer before HARDAC can take over, killing himself in the process.

Not that I know of- there was an episode featuring a robot version of Batman created by the AI HARDAC, but they were on opposing sides, that's the closest I'm aware of.

Not the answer you're looking for? Browse other questions tagged dc batman episode-identification dc-animated-universe batman-the-animated-series or ask your own question.

27
What did Batman whisper?
30
What time period is “Batman: The Animated Series” set in?
10
Is Batman: Mask of the Phantasm the same universe as Batman the Animated Series?
31
Has Batman himself ever taken seriously the idea that he indirectly causes Gotham to have more supervillains?
8
Does Batman really love French onion soup?
2
Identify a comic where Bruce Wayne did not change to Batman throughout the issue
3
Batman TAS - Mudslide - Why didn't Batman let Clayface to turn back to normal
1
Is it implied that the Joker and The Penguin killed their own henchmen?