Are there any Trek books that continue Worf and Troi's relationship?

Towards the end of Star Trek: TNG, a relationship is teased between Worf and Troi, including a moonlight date in the holosuite and interrupted kiss during the finale. I was a little disappointed that the movies fell back on Riker and Troi as a couple rather than continuing this more interesting option. Though Worf's move to DS9 would have made such a storyline difficult. For the record I have nothing against Worf's relationship with Jadzia.

Are there any novels that follow an alternate timeline where Worf and Deanna continue their relationship?

The very short answer is no. Their relationship ended in the show which is usually the kiss of death for them being 'shipped in any of the ongoing books.

You might enjoy Triangle: Imzadi II which explored their fledgling (and ultimately short-lived and doomed) relationship.

It [the book] revealed new facets of their long and intimate relationship and put that bond to its ultimate test in a powerful and unforgettable story that remains one of the most popular Star Trek adventures ever published. Now David examines the heart of Deanna Troi from an altogether different perspective, as he reveals for the first time the full story of Troi's troubled romance with Lieutenant Commander Worf.

At first glance, they cannot be more different. She is an empath, gentle and acutely sensitive to the needs and feelings of others. He is a fierce Klingon warrior, dedicated to a harsh and warlike code of honor. Brought together, however, by a common need to care for Alexander, Worf's troubled, motherless son, they discover hidden reserves of courage and compassion within each other and embark on an unexpected courtship, much to the surprise and discomfort of William Riker.

But does Worf's future truly lie with Deanna... or on a distant outpost called Deep Space 9? And whom indeed shall Troi ultimately call "imzadi"? Imzadi II is a compelling story, an untold chapter in the history of the Starship Enterprise. 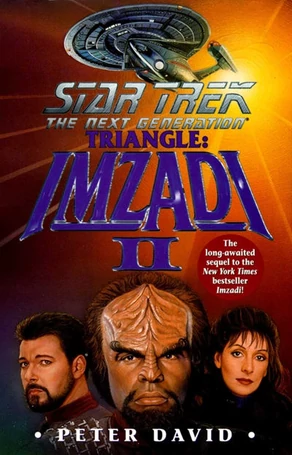 As to why there aren't any books approaching their future relationship, it would appear that Paramount Licensing didn't want anything to "step on" future plotlines.

Peter [Davis] commented, "What prompted the sequel was being contacted by John Ordover and told that the marketing people wanted another Imzadi book. I said, 'What do you mean another one?' John told me the first one sold so well they want a sequel to it. He then said, 'I have a great idea. This can be about Troi and Worf.' When TNG ended, Worf and Troi were an item. When Worf showed up on DS9 there was no sign of Deanna and she was never mentioned and he looked pissed off. There was a story there. I told John, 'I don't want to call it Imzadi.' He said we can call it Imzadi II and I hated that. What we were discussing was a completely different book and a different style. If we call it Imzadi in any way, shape, or form it is going to make people make comparisons. I can tell you right now that the comparisons will make the sequel suffer. The first book was a romantic story where everything goes right and the second one by definition will be about the total destruction of a romance. It is not going to end happily. The compromise we came up with was the title was going to be Triangle and in very small print it would say Imzadi II. That is what I was promised and they swore they would do. So what happens is the cover shows Imazdi II in gargantuan print and Triangle really small which totally pissed me off."

Peter continued, "The other thing that infuriated me was that at the end of the book, I had Riker propose to Troi. Let's have something major happen here. The TV show is off the air, so what the hell? Let them get engaged. The studio would not let us do it because it could step on future story lines. I was left with my head banging against the wall because I had a great scene and I had to trash it and I hated to rewrite it and I hate that chapter and I wish to God we could reprint with the chapter I wanted to do in which he proposes and she accepts. The book is remarkably frustrating to me. The comparisons are odious because the books are so different, it's really apples and oranges and the ending is not even remotely what I wanted to do."