Identifying a Superman Elseworlds comic where the Kyptonians take over Earth

Back in the 90's (I think), I read a friend's Elseworlds comic and now I'm trying to find the title so I can get it. I don't remember the exact plot, but here are the highlights I do remember:

I looked through the Wikipedia article for Elseworlds titles, but didn't see anything under the Superman ones that rang a bell. Please note that I could be wrong about any one of these details - it's been a while since I read it. And given the timeframe, it's possible that it wasn't actually labelled as an "Elseworlds" story, but that's what it was - a one-shot 'What If?' kind of thing.

I know you said you looked through the Wikipedia entry on Elseworlds for Superman, but perhaps you missed the Elseworlds Annuals section. If so, this could be Superman: The Man of Steel Annual #3 - Unforgiven published in 1994

It's hard finding any solid info about the synopsis of this annual but Wikipedia gives a synopsis:

An Elseworld story of how Kryptonians came to Earth to cure their plague and take control of the planet. Batman and Superman give resistance in their fight to free Earth.

In this issue of Superman: The Man of Steel Annual, an alternate universe Kal-El teams up with Batman to free a Kryptonian occupied Earth. Superman begins to question Jor-El's methods when dealing with the "Terrans". He battles his own people and fights alongside them to free Earth from the rule of his own race and as usual Lex Luthor is involved.

According to Comic Book Realm and Comic Vine the characters involved are:

There is an entry in the DC Wiki about Batman's involvement in the resistance, and inspiring a young Kal-El to join

Lex Luthor was believed to have murdered Batman shortly after Batman inspired the young Kal-El, son of one of the planet's leaders to also take up arms in his fight as Superman.

Here's a photo of the cover, maybe it will help 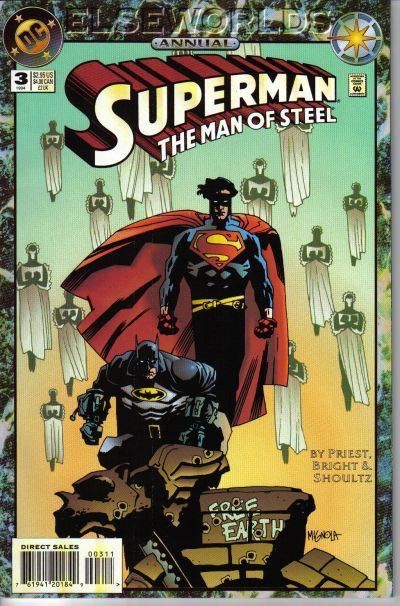 As documented here, that could be Superman Vol.2 #18 (June 1988), wherein Superman returns to the orbit of Krypton and has a kryptonite hallucination:

The true history: Scientist Jor-El tried to convince his fellow Kryptonians that their world was about to explode, but they didn't believe him. He only just managed to send his infant son on a rocket to Earth, where he would grow up to become... Superman.

Turning point: What if the Kryptonians heeded Jor-El's warning?

Altered history: After the Kryptonians give Jor-El a blank check, he plans a migration to that same primitive Eden he was going to send his son in our world - Earth! As kryptonite poisoning sets in, there is a fear that they won't be able to complete their fleet of ships in time, so Jor-El finds a cure for it. When they land on Earth, Jor-El extends a hand of peace to the Kents and then to Earthers everywhere.

A new golden age does not come, however, because Kryptonians either isolate themselves from humans or revel so much in their powers, they become corrupt and enslave humanity. Jor-El won't stand for it and becomes a costumed champion called the Savior.

He creates a new form of kryptonite and the Kryptonians are either killed (presumably) or flee into space. Their last bastion is in Metropolis/New Kandor, led by his love Lara. He can fight her, but can he fight the next generation led by the son he didn't even know he had, Kal-El! NOoooooooooooooooooooooo!!!!!!! (Swear to God, this is how it ends - see what I mean about it being too short?).

Not the answer you're looking for? Browse other questions tagged story-identification dc comics superman dc-elseworlds or ask your own question.

6
Why did Superman & Supergirl start to suffocate instantly when Luthor made our yellow Sun red?
19
In "Man of Steel", how did Superman get his super-suit?
4
Did Kryptonians own any other planet or had at least a major functional colony out there?
17
Why aren’t the Kryptonians powerless in their biosuits in Man of Steel?
3
What did Adventures of Superman use from the comics and what was later added from the series?
3
Do Kryptonians know about the effect of yellow suns and how did they use it?
1
Why not make "supermen" on Krypton?
6
When Superman bleeds, does that mean he is killing the Kryptonian race?
1
Does having the Codex inside him make Superman stronger in Man of Steel?
2
In the 2013 movie Man of Steel why doesn't Jor-El simply cripple or destroy General Zod's ship?