When I was in elementary school (1999-2004) I had an audio cassette tape featuring a Justice League story that I have since not been able to locate.

A macguffin that Darkseid wants is broken into several pieces which are scattered about Earth. The Justice League breaks into teams of two to recover the pieces before Darkseid can claim them. Each team successfully fights off Darkseid and retrieves their piece until the last fight where Darkseid overpowers Superman and Batman. When they call in backup, Darkseid reveals that his plan was let the League gather the pieces and then take them from headquarters. He does so, but the heroes chase him to his base and use the macguffin to banish itself to another dimension. Then they retreat in victory.

Superman: I'll put Stonehenge back together and meet you in Metropolis

It bothers me that I haven't been able to locate the story considering how much detail I can recall.

I found it! We found the cassette tape, and the case it came in. It was

The evil Darkseid plans to build the Ultimate Weapon and destroy the Earth — and it's up to the Justice League to stop him! In a race against time, Superman, Batman, Wonder Woman, and other DC super heroes travel around the world — to China, Egypt, England, even the bottom of the ocean — to find the pieces of the Ultimate Weapon before they fall into Darkseid's hands!

This continues the line of DC Comics Audio Action Adventures — super hero episodes that fuse all the action of a story with hot pop music! Each track features a different location and its own musical style — rock, funk, hip-hop, techno — in rich, wall-to-wall sound with 3-D sound effects! 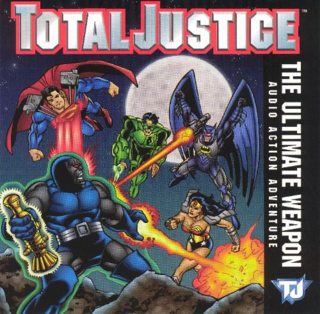 Not the answer you're looking for? Browse other questions tagged story-identification justice-league or ask your own question.