Is the Deadpool-caused superhero disappearance ever mentioned elsewhere?

In the Deadpool Kills series, Deadpool goes and attempts to wipe out the Marvel multiverse by killing everyone. Eventually, his actions start to take effect, and the Deadpool of the 616 universe notices that no other heroes are showing up for a big battle. 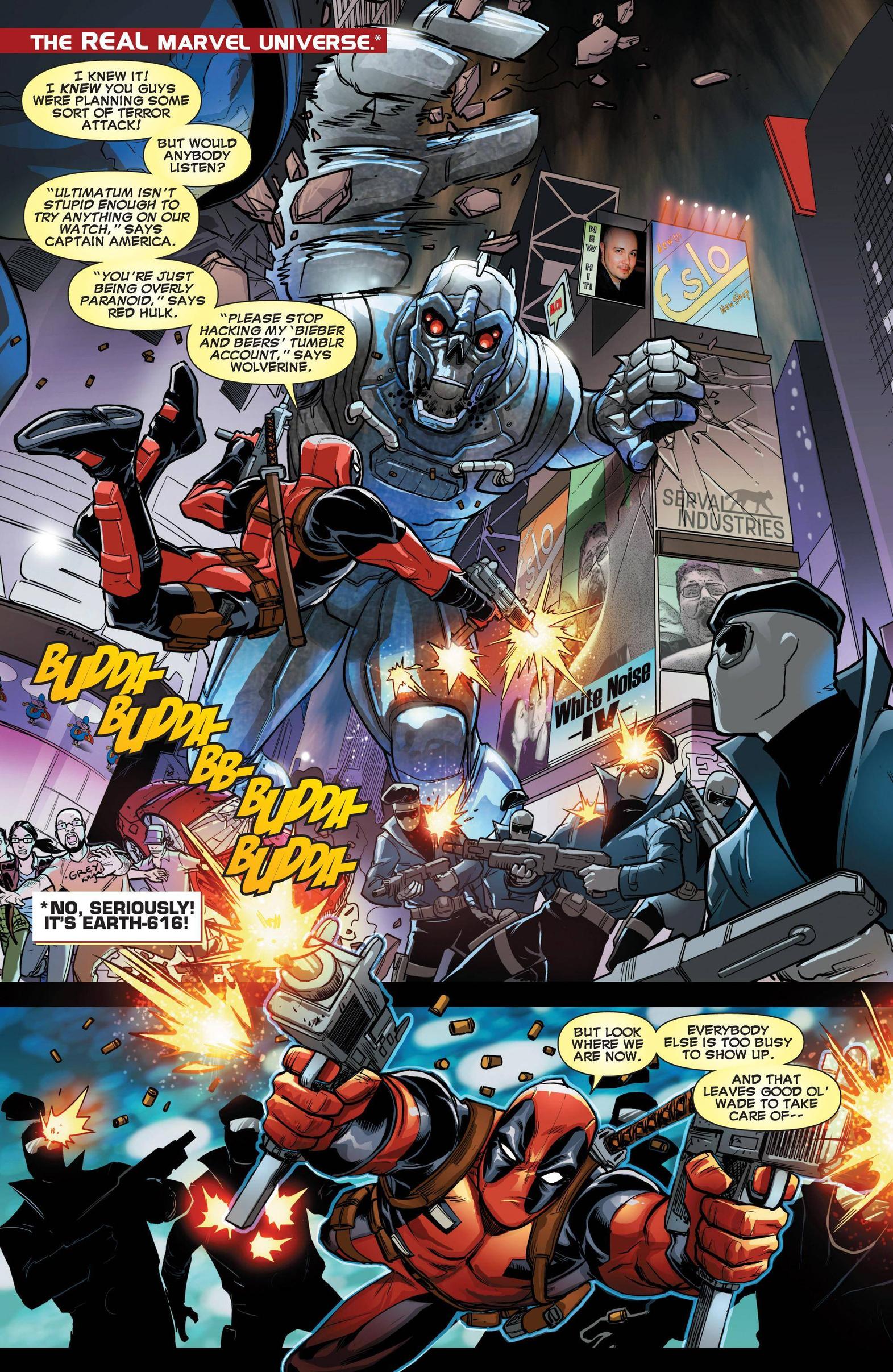 The comic explicitly states that it's the 616 universe that's being affected by this, though Deadpool is the only one that seems to notice.

Is this temporary disappearance of superheroes mentioned or referenced in any other comics?

Deadpool Kills The Marvel Universe was released August 1, 2012. On this same date, the following Marvel comics from that universe were also released:

None of the characters in these issues ever mention the Deadpool Kills rampage, because the Deadpool this refers to is Dreadpool and originated in Earth 12101.

As you know from the story Deadpool's eventual goal was to reach the Man-Thing and access the Nexus of All Realities to "kill the origin of all fictional characters." Through this kills series he starts by killing the Fantastic Four, Uatu the Watcher, Doctor Doom, Spider-man, and the Avengers. Then with stolen Pym particles he puts miniaturized bombs in Luke Cage's coffee to kill him, and enlarges Mjolnir to kill Thor. And it goes on. Note that Avengers, Luke Cage, Spider-Man, and everyone else in 616 do not reflect these events. Eventually he does reach the Nexus and Man-Thing agrees with Deadpool's mission, sacrificing himself to open the Nexus. The next Deadpool Kills series forms a Deadpool Corps to kill all Multiverses however a band of Deadpools form the Evil Deadpool Corps to kill all versions of Deadpool. In the end, the 616 Deadpool kills Dreadpool, the last remnant of the Deadpool Corps. Through the series, I do believe Deadpool was able to both be every character and kill every Marvel character, plus others such as Gangstapool, Mexican Deadpool, Sharkpool, Squirrelpool, Egopool, Galactipool, Hello Kitty Deadpool, Draculapool, and too many others to mention.

There is no mention of this incident in the other publications so far as the incursion into 616 was relatively small and contained.

11
Which Earth-616 Marvel character has the highest kill count?
2
How is the timeline of Marvel established amid the multiverse, reboots, etc?
4
Have Deadpool & Thanos ever fought?
30
Has any Marvel or DC comic ever shown graphic nudity?
3
What are the essential comics in Marvel's "Civil War" comic event?
1
Has Deadpool ever had telepathy?
7
Did Molecule Man really recreate the universe in Secret Wars (1984/1985)?
8
Is Jack-O-Lantern part of the DC Universe, or the Marvel Universe?
9
In the comics is Blade known to have a particular accent?
4
Is Iron Man: Armored Adventures a purely stand alone series, or does this version of Tony exist in some other universe outside of 616?