Why are the losses to the First Order not acknowledged?

So towards the end of The Last Jedi

The First Order has lost its leader and its command ship (which I believe also doubled as a construction yard) the new leader is emotionally unstable and inexperienced. This is kind of a big victory.

Yet none of this is mentioned among The Resistance. I know they're a little preoccupied, but this could at least affect morale. It could also have wider implications.

Did I miss it, or is it just overlooked?

It's not entirely clear what the survivors of the attack have (or haven't) been told.

In the few short minutes that we see them after they board the Falcon, the only two people present that know that Snoke is dead are Finn and Rey. Finn is trying to make Rose comfortable and Rey spends her time repairing BB-8's antenna (as usual), has a ten-second chat with Poe and then a slightly longer conversation with Leia about Luke.

Considering how fast the events of TLJ happen, it is probably just that no one has gotten around to actually debrief Rey who is the only one was there to see Snoke's death and Kylo's very tentative hold on power.

Add to this the fact that The Resistance just went through its own heavy losses and they probably are focusing on those first before they start asking what happened with the First Order.

It should be noted that at the start of Poe Dameron #31 Leia mentions being aware they have done some damage to the First Order, but in comparison to the damage done to The Resistance, well...she is not going to focus on the losses of the First Order that seems more stable. 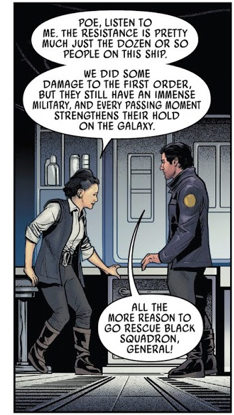 2
Newton’s axioms in Star Wars
9
Are the Empire (or First Order) not using clones any more? If not, why?
33
Why didn't the original Death Star's shields protect against small fighters?
0
The first order Gorilla Walkers Star Wars
11
Why did the First Order land AT-M6s so far away from the blast doors?
17
How much of First Order—ships and troops—are still around after the events of the “The Last Jedi.”
22
Why did the Dreadnought not shoot the cruisers first?
5
How capable are Y-wings and B-wings for taking down a First Order Dreadnought?
3
How many dreadnoughts did the First Order have?