What has happened to these cities in Blade Runner?

In Blade Runner 2049, we get glimpses of how huge cities such as San Diego and Las Vegas look. They both seem to have been nuked somehow. Is there any canonical explanation for what has happened or if the situation extends to other parts as well? (or I guess the right question to ask is which other cities are not affected).

In an interview about the film, director Denis Villeneuve had the following to say about Vegas:

The lights in deserted Las Vegas are the glow of radioactive fallout in Blade Runner 2049. "That dirty bomb generated a strong amount of radiation, but it doesn’t destroy the infrastructure," says Villeneuve.

After the radioactivity dissipated, Vegas became barely habitable, the perfect place for Deckard to hide out. "Nobody wants to live there. Like the Russian city Chernobyl, the place becomes a ghost town," says Villeneuve. "So Deckard went there after the first movie."

In the same interview he comments on Los Angeles, indicating that its situation is the result of climate change, but admits that there was some exaggeration on the part of the filmmaking team about the speed at which such changes can happen. As San Diego is only 2 hours away by car, the same explanation should apply for that city, too. In fact, Villeneuve speaks not only about Los Angeles but also about California in general:

The global climate in 2049 is even more berserk than it was in the original film. California copes with never-ending winter and is crowded with refugees.

This view is starkly demonstrated by the massive sea wall on inland Sepulveda Boulevard, protecting the city from the rising Pacific. 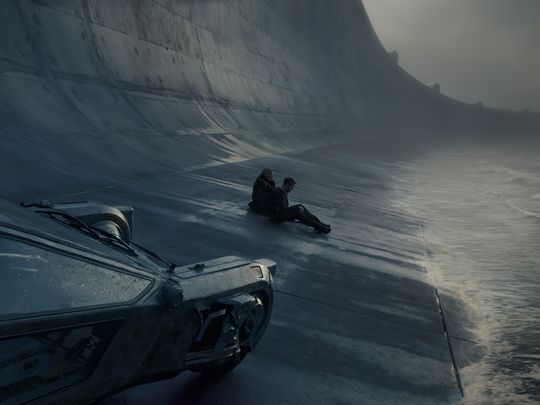 "It's not very optimistic portrait of the future," says Villeneuve, who says filmmakers consulted scientists about future climate and technology. "I would say it’s an exaggeration, an exploration. The ocean rising could happen one day. But not that much. It’s a sci-fi movie."

This isn't a direct answer, but it's interesting to compare BR 2049, not just with the first movie, but PK Dick's original novel, Do Androids Dream of Electric Sheep? In DADES, the Earth is, as I recall extremely underpopulated and then there is that whole animal adoption fetish because something wiped out 99% of animals. These are underplayed in BR1, but front and center in the book.

It's been a long time, so I don't recall it that well, but the novel gave the distinct impression that there had been a major catastrophe, not detailed upon unless I missed it, that pretty much destroyed Earth's ecology. If you're looking for that, you'll see much more of it in BR 2049 than in the first.

While I like both movies, I found 2049 markedly more in tune with PKD aesthetics than the first Blade Runner. Not to criticize BR1 - a straight out unquestioning adaptation of DADES would probably never have succeeded as film.

San Diego took an actual nuclear bomb hit (US Naval Location)... then was utilized as a dumping ground over the destroyed city since its radioactivity was flushed by weather conditions (as well as that orphanage location)... while Vegas was a dirty-bomb and stayed virtually intact but radioactive.