Anime show/movie about a villager blond boy who live in an old day town with weird creatures, meets a red-haired girl coming out of a computer

He was riding his bike on some grass and listening to music on his headphones when he saw this tall red-haired girl who sings beautifully, being chased by bad guys.

He later finds a microchip which he put into his computer, when suddenly a young red-haired girl comes out of it. He then goes onto this adventure where bad guys are looking for the redhead. She was a digital powerful clone of the tall red-haired girl, and in the end, they sing in space to save the world.

I mostly remember the end when the boy cried, hugging the tall redhead because she and her clone merged together and she doesn't recall anything.

This might be Fractale (2011), an 11-episode shonen anime series directed by Yutaka Yamamoto and produced by A-1 Pictures and Ordet. 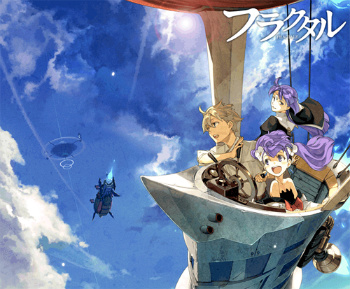 Revolving around a futuristic era in Ireland where the world's source of order—the "Fractale System"—has begun to fall, a fourteen-year-old boy named Clain meets the mysterious Temple priestess Phryne being pursued by chance and rescues her. He takes Phryne back to his home and tends to her injuries, but as quickly as Clain begins to bond with the girl, Phryne disappears the next day, leaving behind a brooch for Clain. A female Doppel named Nessa appears from the brooch, and Clain and Nessa both go in search of Phryne while uncovering the secret of the Fractale System.

In the image, the girls have purple hair. In the anime, it ranges from red to brown. There's a reason for this according to TV Tropes:

There's a reason that Nessa and Phryne (as well as Moeran, the High Priestess) have the same hair colour. They are all "Phryne clones." Nessa is how Phryne looked as a 10-year-old while Moeran is presumably how Phryne will look like when she's 40. In the manga, as well as promotional posters, all three of them have purple hair. In the anime, Phryne's hair colour causes Fridge Logic—apparently, as a child, she had red hair. Which turned brown as a teen. And will eventually turn purple.

Clain is indeed blond, and starts out riding his bicycle through a field while listening to a song that will be plot relevant. And yes, there are weird creatures in the village. 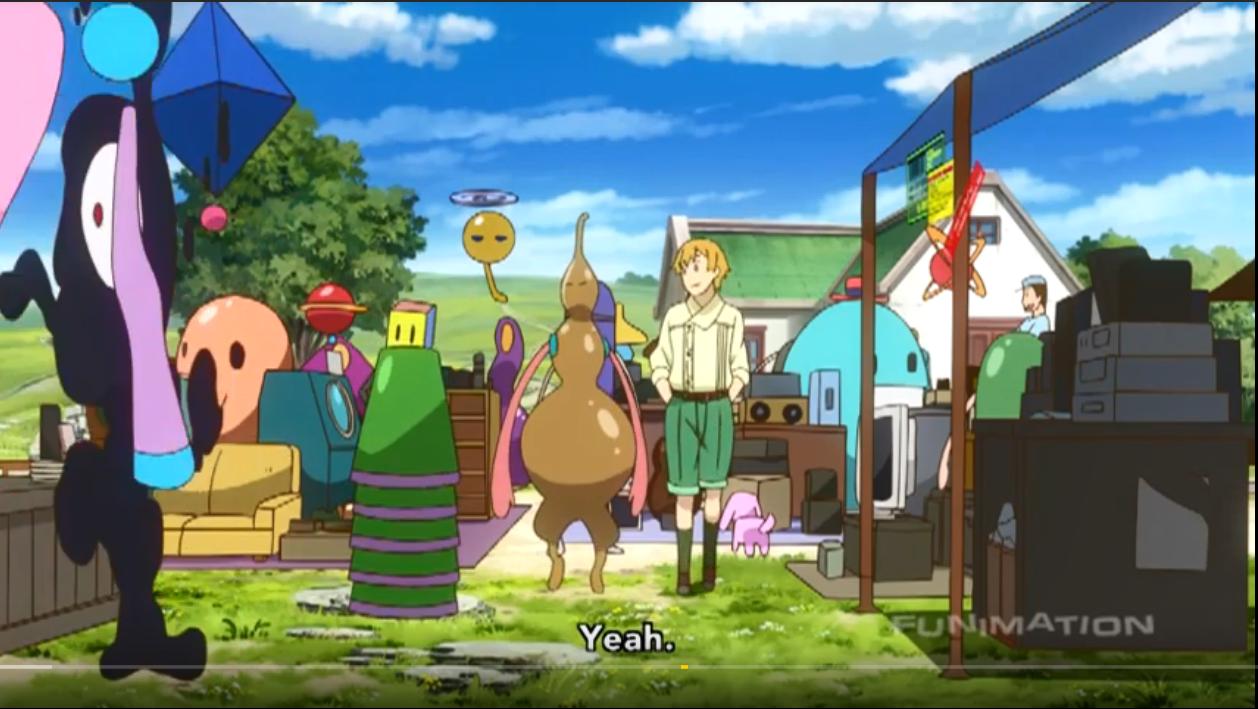 A synopsis of the final episode:

Barrot reveals the whole truth about Phryne and Nessa and the original god of Fractale to Clain. But while Barrot claims that Phryne is his alone, Phryne stabs him and runs away with Nessa following behind. Clain rejoins Sunda and Enri while Phryne decides to merge with Nessa in order to keep Nessa from disappearing. Sunda sends Enri back to the airship before Dias's troops destroy the Temple while he and Clain continue on. Sunda and Clain reach the top of the Temple where they find Archpriestess Moeran with Phryne and Nessa. Moeran grants them and Dias, who arrives safely moments later, while they witness the restart of Fractale. Dias uses the opportunity to blow up Moeran and himself. Sunda and Clain race to Phryne and Nessa, but Sunda pushes Clain into the elevator while holding off the Temple's troops. After Clain confesses his feelings to Phryne, the three arrive at the Sanctum and discover that the original Phryne was a 16-year-old girl who retained the personality of a 10-year-old child due to a mental traumatization, and whose "data" was collected to create the Fractale system. Afterward, Phryne and Nessa join together and Fractale is restarted. One year later, the people are learning to live without being dependent on Fractale. Clain has returned home and is taking care of an unconscious Phryne. Phryne finally awakes, but surprises Clain by behaving like Nessa. After a moment, she reveals to him that she has always loved him too, and that she is happy now, Clain, realizing that it really is the women he loves, tearfully embraces her with Phryne happily accepting it. The series ends with a close up of the family photo that was taken before the attack on the temple, with Clain, Phryne and an invisible Nessa along with the rest of Sunda's faction of lost millennium.

15
Anime about a boy and a girl who ride ostrich-like creatures through a valley
9
Looking for fantasy book about a boy who meets a tribal girl who turns out to be a shifter
3
Toonami anime about a boy with a sword and a girl with weird Uzis
3
Animated (anime?) movie with a boy who is transported to another world and meets his backpack as a living creature
1
Anime (maybe movie) about a boy meets naked girl with a very distinct thick collar or bracelet
6
What's the anime where a girl who comes to town to fight an enemy meets a guy who lives with an old man? (It's not Bleach)
4
An OLD anime about a boy with "demonic" powers joins with 2 others to fight aliens who use humans for genetics experiments