Loki won the wizard tournament and became Sorcerer Supreme (shown in Doctor Strange #383). However, in Doctor Strange #385 this is said to have been a ruse, claimed by Zelma who thought she could reach his soul ("You reached into my soul, remember? Well, guess what, genius. That was a two-way street. I saw everything you were trying to keep from me. From us."). I highly doubt anything that comes from Loki, be it consciously or unconsciously shared.

So far, there are two options: Either Loki really was Sorcerer Supreme and just faked having it faked and was able to transfer the powers back to Stephen Strange (without anyone noticing), or it was as Doctor Strange #385 wanted us to believe and just a ruse. Let's assume the latter for now.

Then certain things don't make sense. He told everyone he was Sorcerer Supreme. He told Thor in Doctor Strange #381 and teleported them away instantaneously to help her stop an ice giant invasion of earth. He told his mother in Thor #704 with the Mangog in Asgardia's halls with an offer to send her "far enough away that the Mangog will have to search for a million years". He even told a cat in Unbeatable Squirrel Girl Vol. 2 #29 "Why am I creating illusions anyway? I'm the Sorcerer Supreme now, Mew! I can just summon people to fight for me!" and he does. I'm not sure how serious I am to take Unbeatable Squirrel Girl, but Loki is a little bit too convincing in his role. He has powers he shouldn't have. My 4th-wall-guess is that the writers of Doctor Strange really let their colleagues believe that Loki is Sorcerer Supreme, so that whatever they would come up with would look convincing.

Question: If Loki wasn't Sorcerer Supreme, how can the inconsistencies about that be explained?

It's worth noting that even though Doctor Strange is the Sorcerer Supreme, his fellow human sorcerers; colleagues and foes, are almost always comparable to him for the most part. He definitely edges them out but it's not like he's leagues apart from them, at least he hasn't been in the recent past. On top of that, he definitely has resources that the others are not privy to. If you've followed Loki at all, you'd know that he's an amazing sorcerer in his own right, one of the best in Asgard if not the best one. Moreover, he has achieved all this by rarely calling upon the mystical powers and principalities, something that most human mages do, although that is not something that he's forbidden from doing. Even if you lowball Loki and place him under the same bracket as Doctor Strange's human sorcerer colleagues and foes, there's at least one thing that Loki definitely outclasses Doctor Strange in; his ability to absorb the cost of magic without consequences due to his godhood, something that is explicitly stated in Doctor Strange #384. 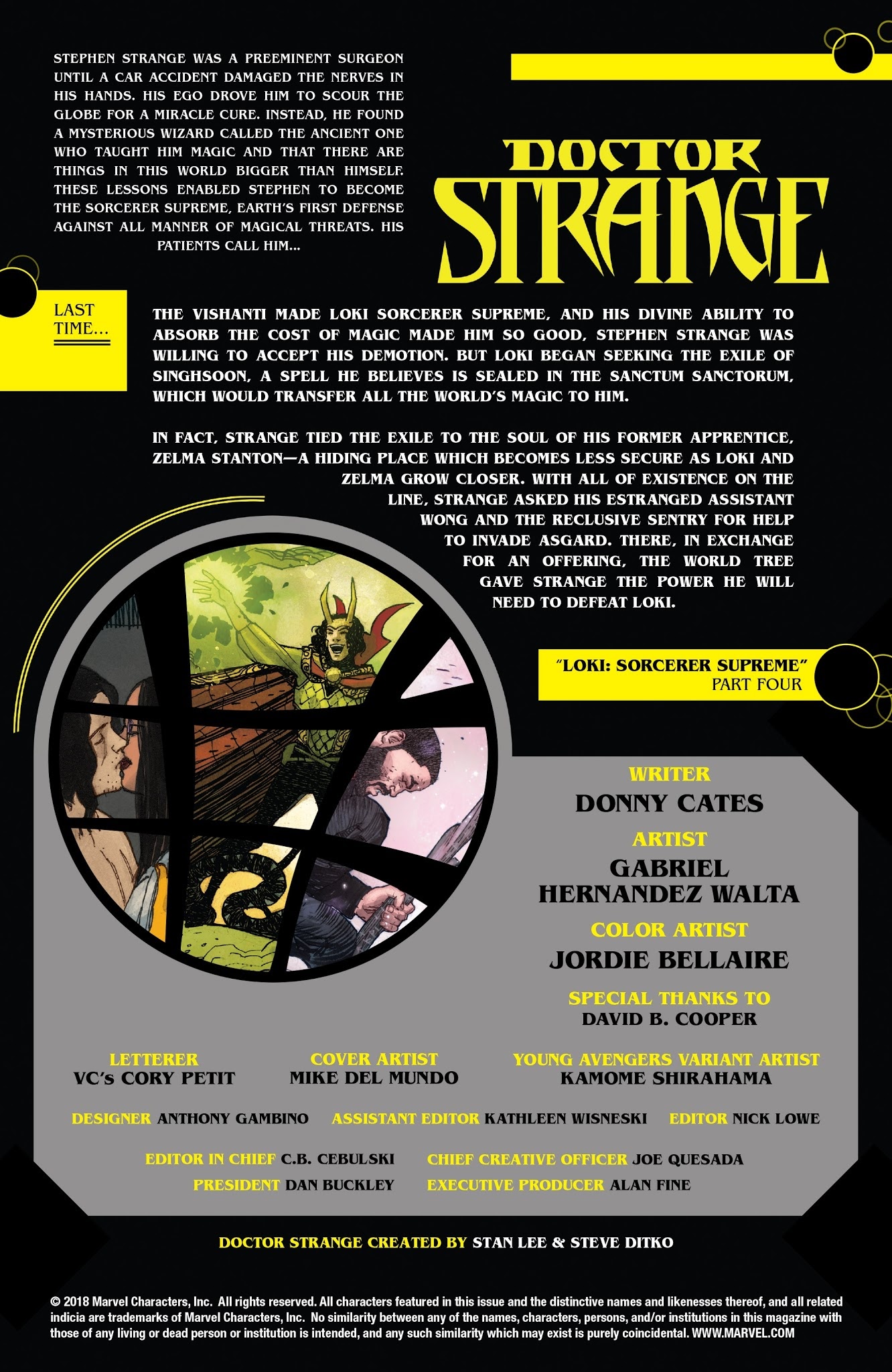 Doctor Strange, as Sorcerer Supreme, definitely has access to mystical objects and tomes that Loki or anyone else for that matter is not privy to. Moreover, being merely exposed to these resources might not guarantee your being able to use them indefinitely, perhaps you need to be the Sorcerer Supreme to be able to use them at all. One thing is for sure, however, Loki wasn't pretending and he was indeed the Sorcerer Supreme during that period. We know for a fact that Loki held his own against a Dr. Strange that had upgraded himself to a god of magic by getting hold of a portion of Yggdrasil's magic and was using Sentry to absorb any cost of using that magic that he would've had to endure, thus, freeing him up to use his newfound abilities to their fullest. Facing that sort of an opponent could not have been pretend.

In New Avengers #20 (2013), it was posited by Stephen Strange, himself, that even if someone, who happens to have a nominal understanding of the mystic arts, gets their hands on a lot of high level mystical resources, they'd still be child's play to Stephen; unless and until they're as good as he is. He demonstrated this while the then members of Illuminati battled The Great Society who were basically an iteration of the Justice League. Their members were Sun God (Superman), Rider (Batman), Boundless (Flash), Jovian (Martian Manhunter), Doctor Spectrum (Green Lantern), and The Norn (Doctor Fate). This is the degree of dominance that Doctor Strange displayed: 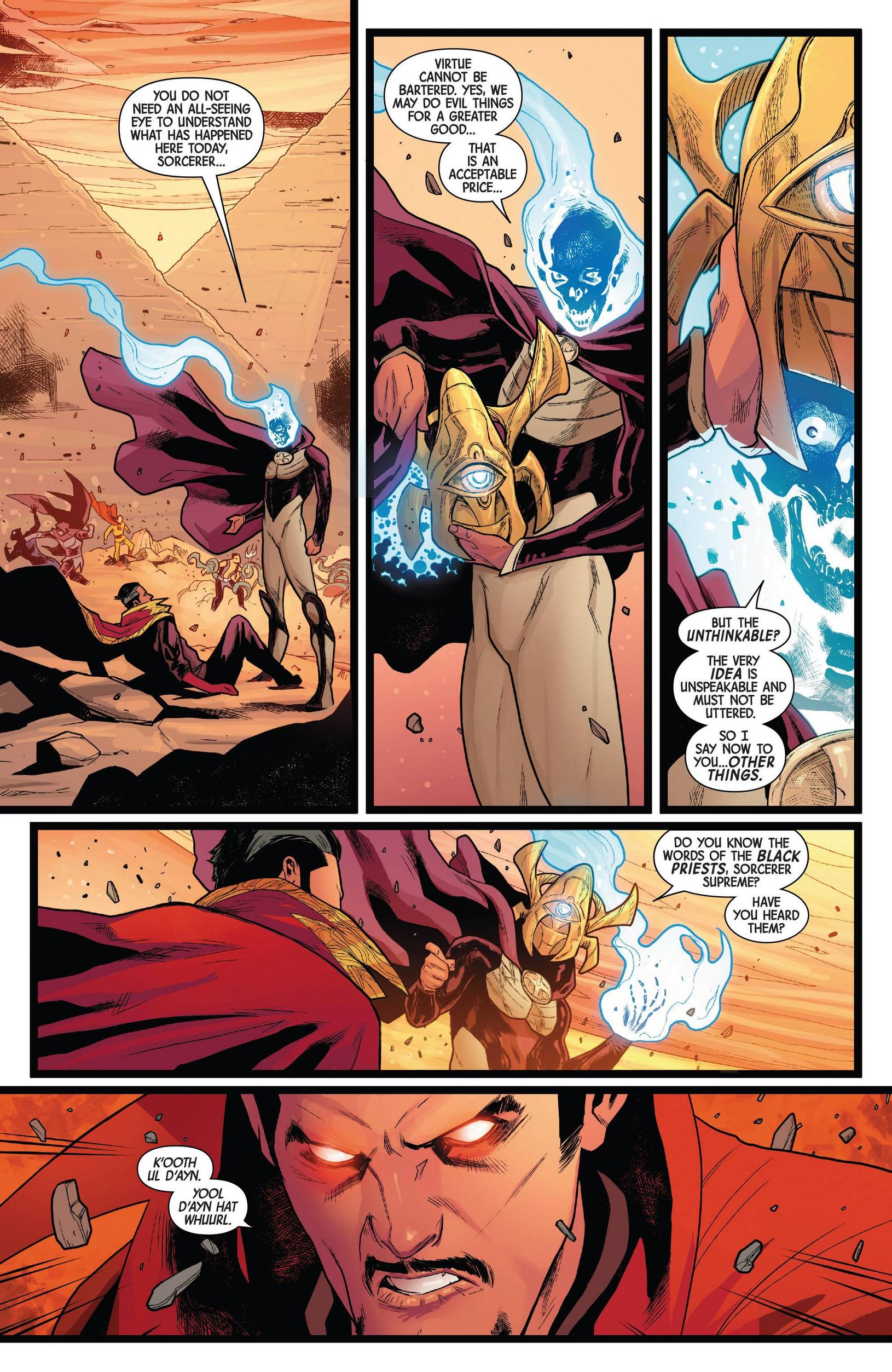 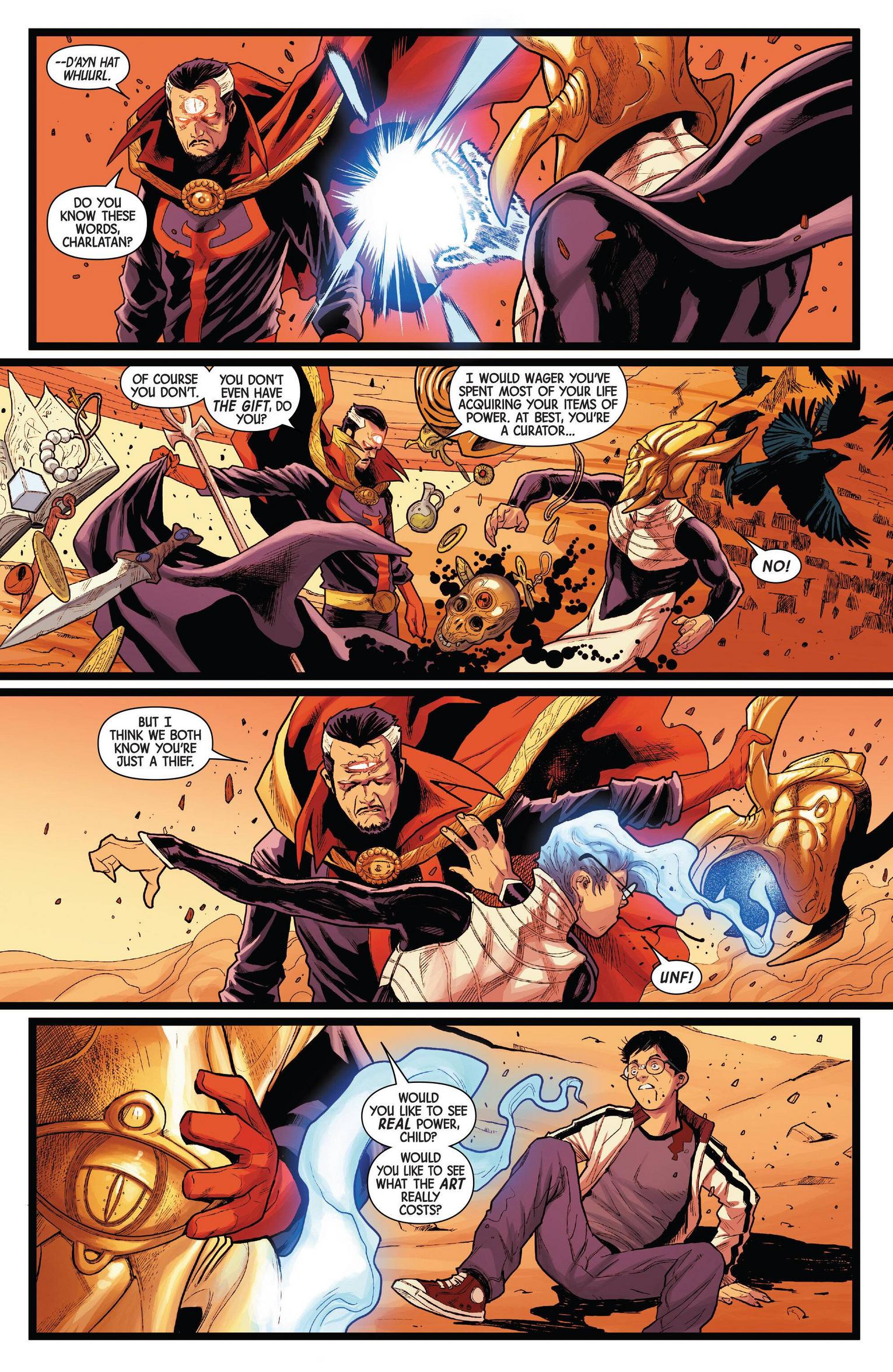 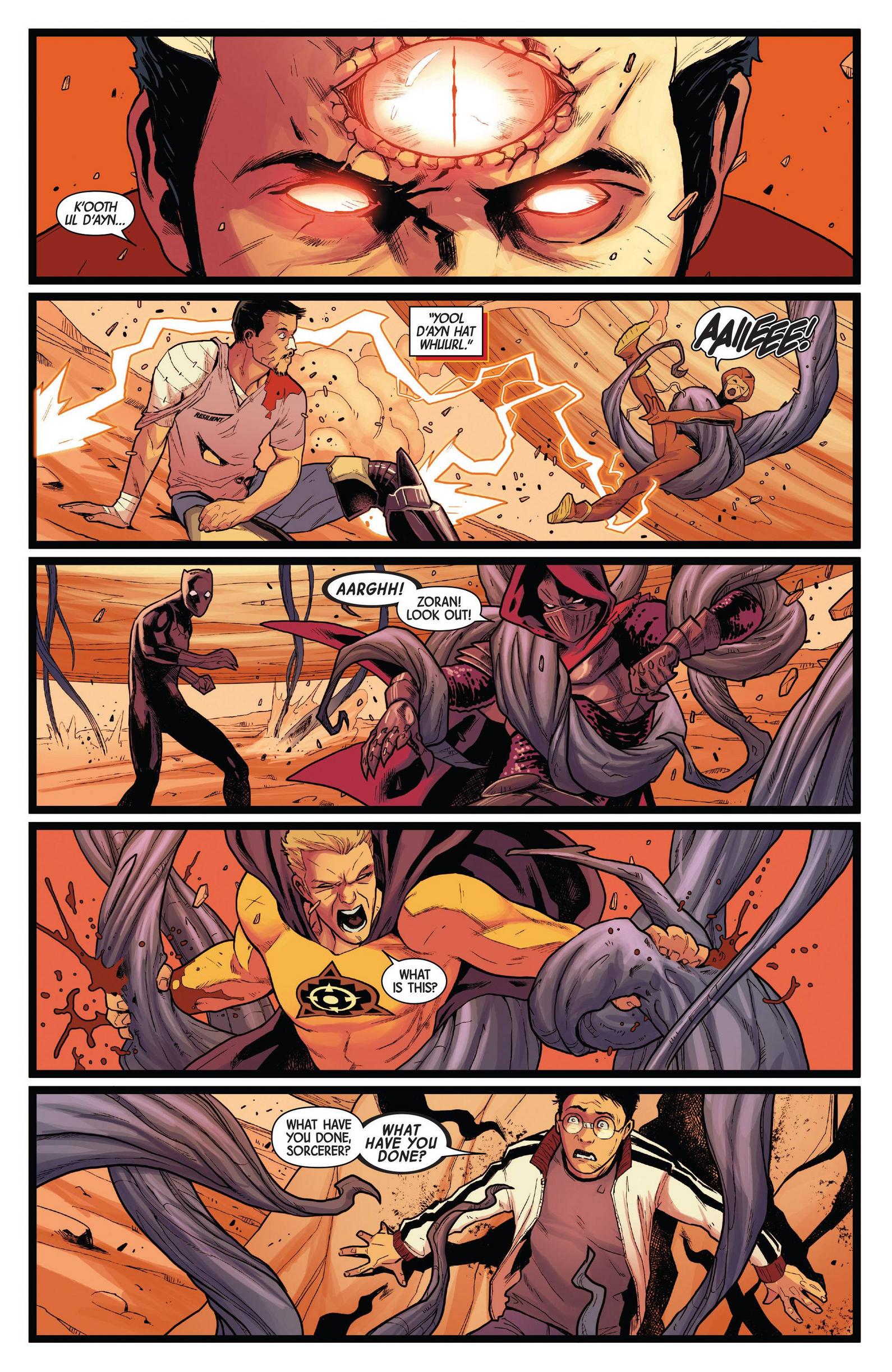 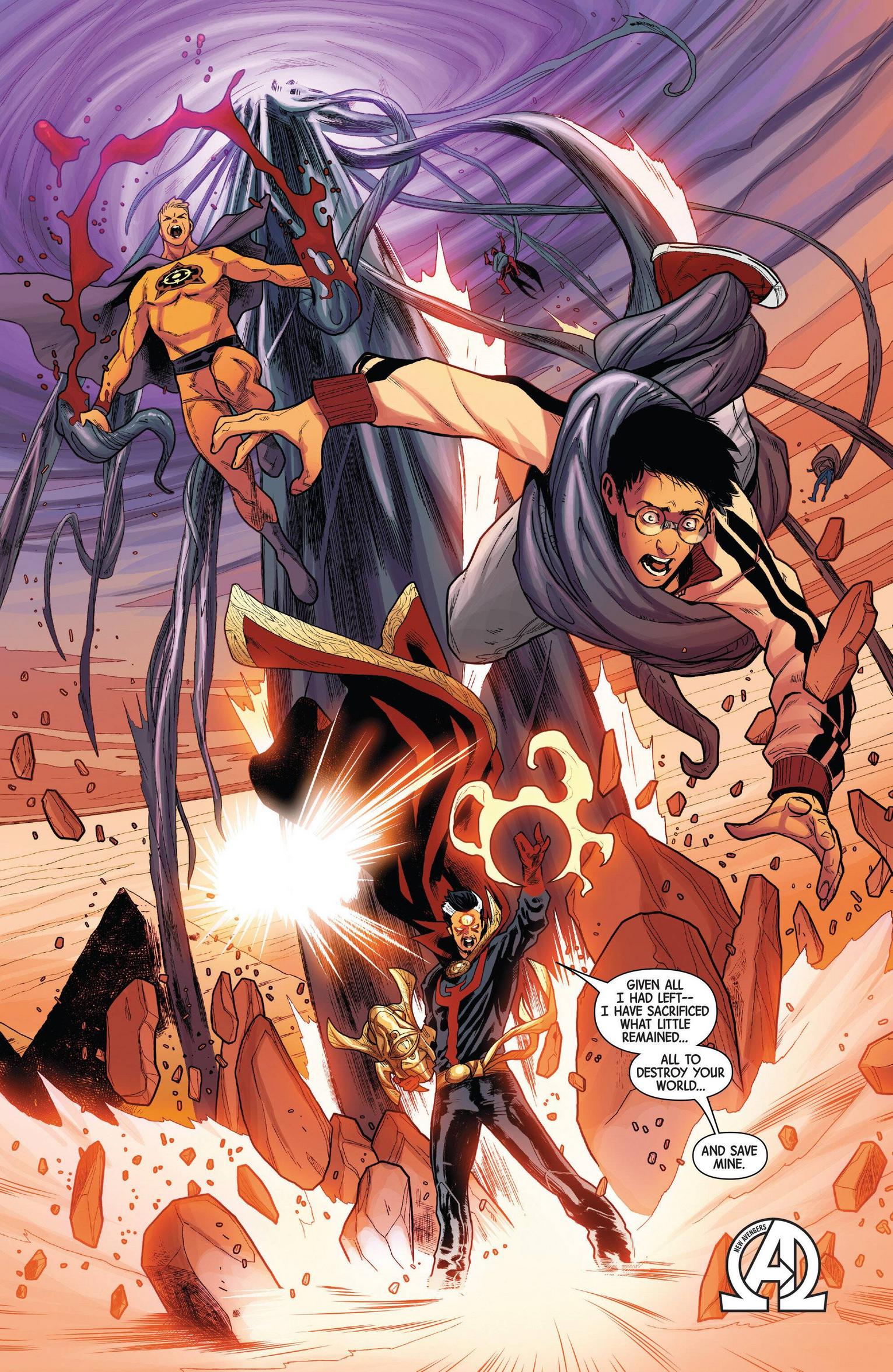 This should be a testament to what sorta sorcerer Loki really is, even before he became the Sorcerer Supreme. He is definitely good enough to trick Stephen into thinking that the Tournament of Sorcerers really happened and that Loki had been chosen to become the new Sorcerer Supreme even though he wasn't participating, let alone win, despite the fact that Stephen had participated in the previous two. After having become the Sorcerer Supreme, perhaps he was doing such a good job at it that the Vishanti did not notice or maybe he had some sorta trickery in place to ensure that they didn't or perhaps a combination of both. I think we have established that Loki is capable of that. We know for a fact that it's not impossible to trick the Vishanti either. If Doctor Strange can ensure that the Vishanti cannot detect him at all (Doctor Strange: Sorcerer Supreme #49), Loki can at least ensure that they don't notice there being a new yet equally adept Sorcerer Supreme maintaining the balance. 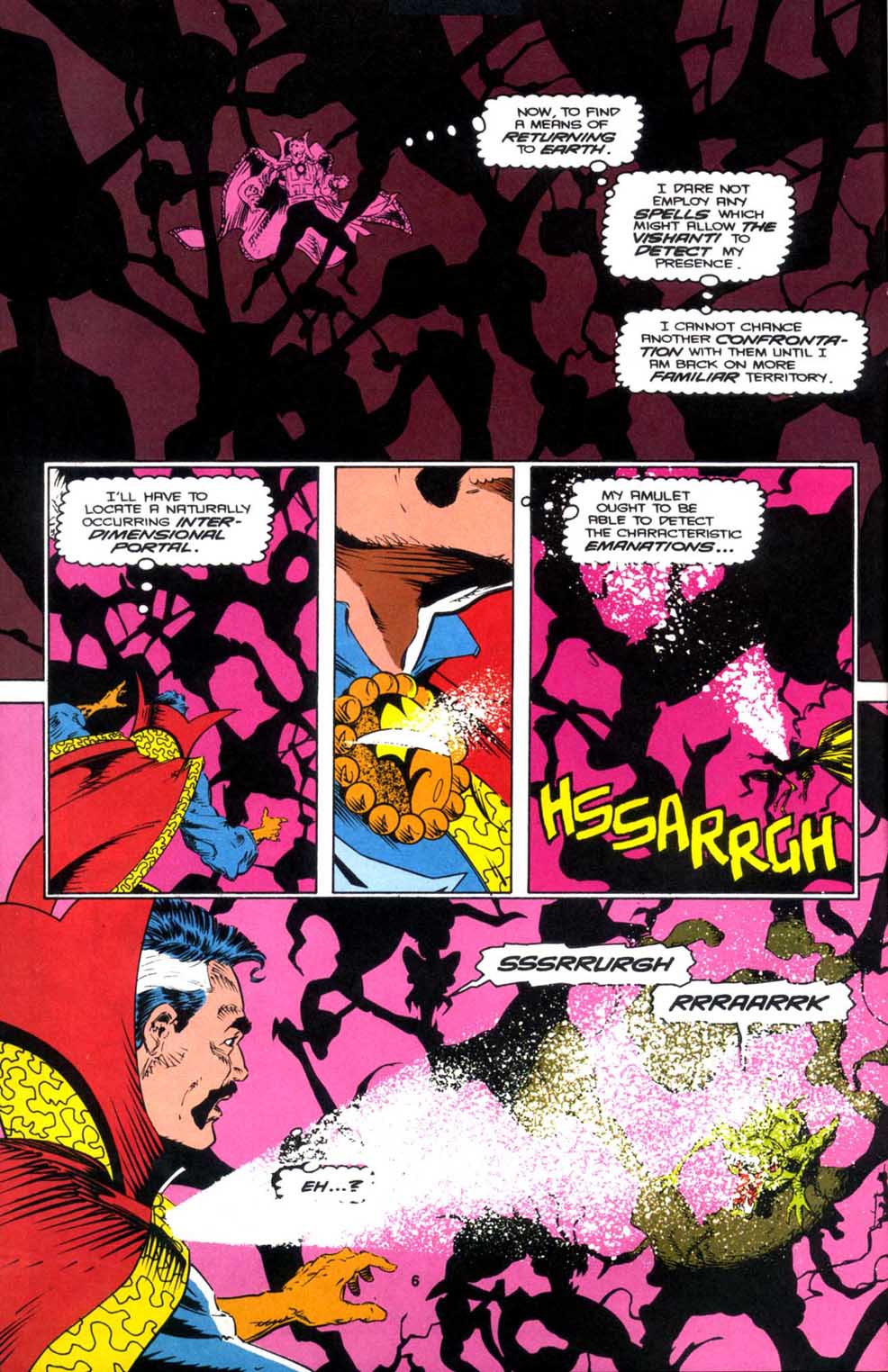 Moreover, in Doctor Strange: Sorcerer Supreme #49 itself, he invokes the Emancipation Incantation which prohibits him from calling upon the mystic powers and principalities for aid. All because he did not want to participate in the War of the Seven Spheres even though he was obligated to participate beside these powers and principalities due to having pledged allegiance to them in exchange for invoking them for aid. Participating in the War of the Seven Spheres would've entailed leaving Earth unprotected for 5000 years and hence, he declined. 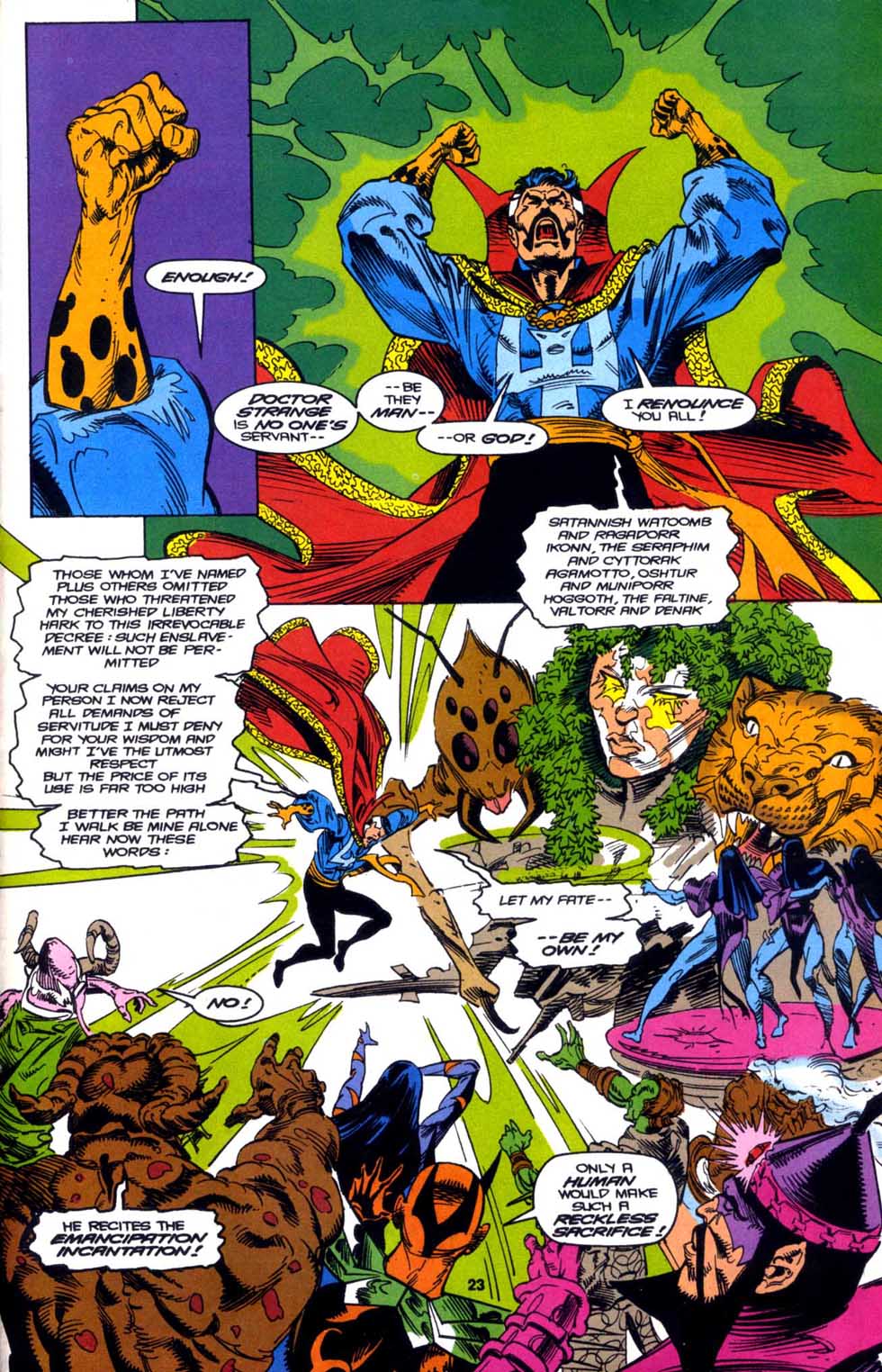 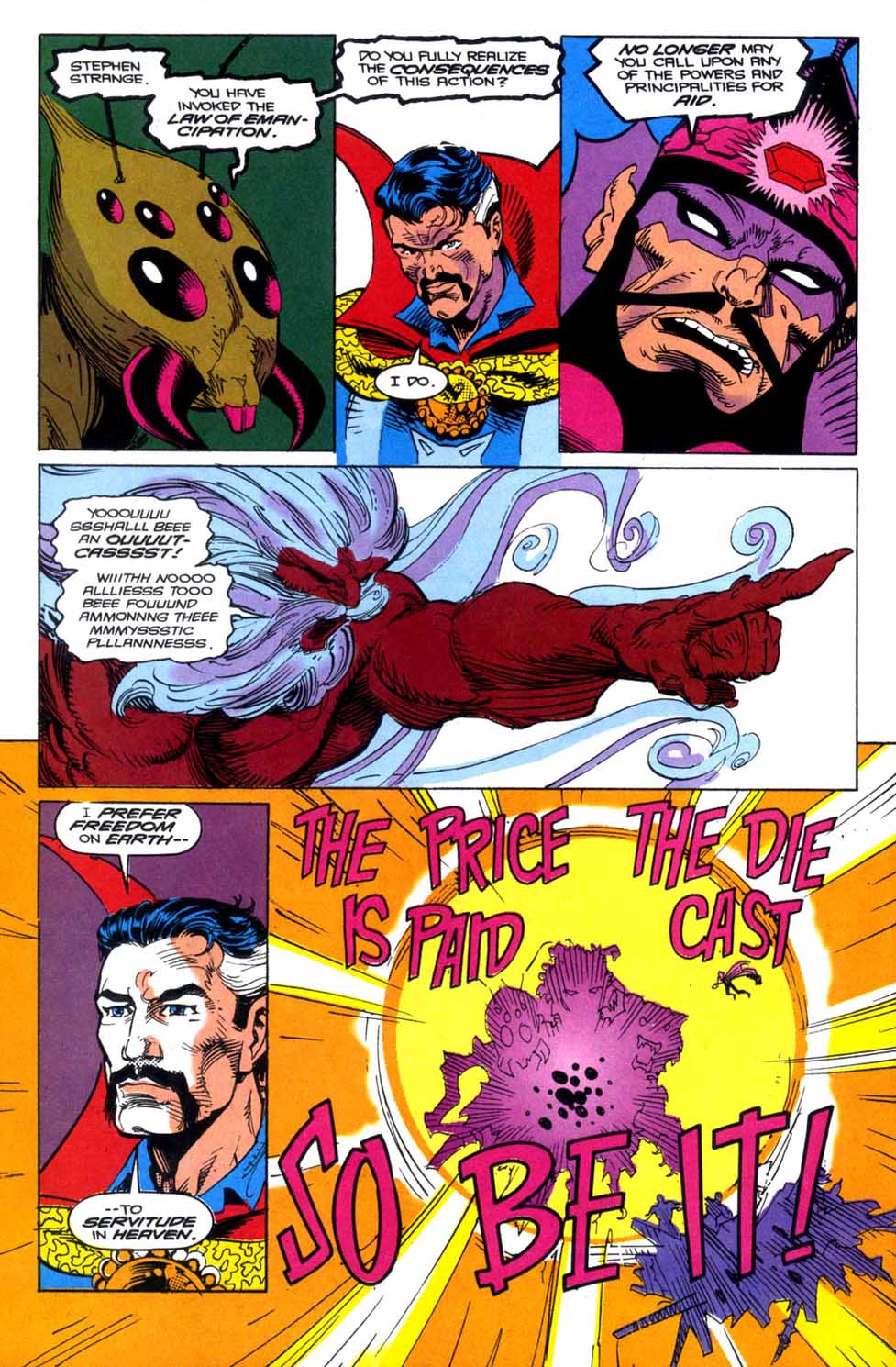 This made it imperative for him to regain his edge if he was to continue keeping the planet safe. During Doctor Strange: Sorcerer Supreme #80-#90, he did exactly that by making himself a powerful sorcerer in his own right independent of the mystic powers and principalities by honing and mastering chaos magic and the ambient mystical energy of the planet and the universe at large. This became part and parcel of being Sorcerer Supreme from that point on. His newfound status was so impressive that it became all the more imperative for the Vishanti to recruit him by their side. They did after promising him that they'd place him back at the same point in time on Earth as they left. This allowed him to invoke the mystic powers and principalities again. However, not to the same extent as during his classical days as the fact that he had inconvenienced the principalities other than the Vishanti remained. This is why Doctor Strange isn't as powerful as he used to be during his classical days, this brought him closer to his peers. In any case, the abilities that Doctor Strange independently acquired which went on to become part and parcel of the Sorcerer Supreme moniker aren't abilities that Loki would be predisposed to by default, so those are definitely some of the abilities that he got access to by being the Sorcerer Supreme, in addition to the access to the mystical artifacts and tomes, that is.

Oh, and it is also confirmed on panel by none other than Doctor Strange, himself, that he is the one who gave Loki the title and everything that comes with it in Doctor Strange #381. 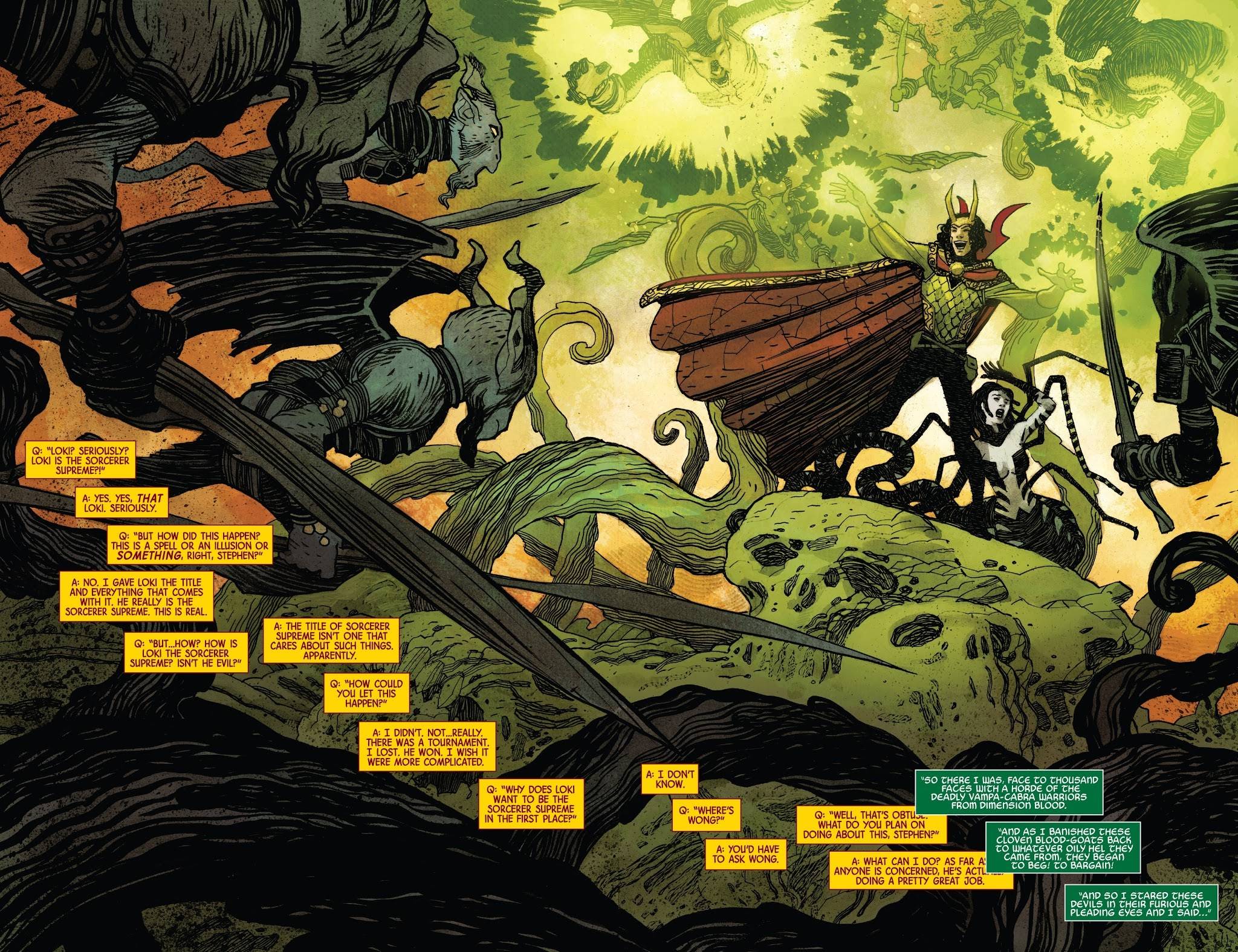 So yes, Loki was indeed the Sorcerer Supreme then.

Not the answer you're looking for? Browse other questions tagged marvel magic loki or ask your own question.

10
Why is Loki introducing himself as Loki of Asgard?
6
How was Loki able to visit Earth without Bifrost?
11
Is Loki actually a god?
9
Who were the 80 people that Loki killed?
13
What Loki scenes were filmed for Avengers: Age of Ultron?
7
Why does Loki take the Tesseract?