Does the Infinity Gauntlet from the comics work in other universes?

My main question is this, does the Infinity Gauntlet work outside of its own universe? My reason for asking this is because I recall there being a comic book where somebody states that the Infinity Gauntlet from their universe doesn't work in the other one. It could be Mr. Fantastic or Iron Man, if anybody can help me answer this, that would be great.

In a word, no. In the JLA/Avengers crossover event, Darkseid gathers the six gems only to discover that they're worthless because he's not in the universe that they came from. There are other examples but this seems to be the most explicitly stated.

It's worth noting that this isn't portrayed consistently. In the Avengers/Ultraforce comic the Infinity Gems work in the Ultraverse, despite this not being their universe of origin.

One thing the Infinity Gauntlet cannot do is work outside the Universe it comes from. The Gauntlet from 616 will only work in the 616 universe so on and so forth. It is also incapable of being used to destroy itself.

The page includes references, don't have access to the issues to determine from which one the statement is made.

As noted elsewhere by Edlothiad, This is also mentioned in NEW AVENGERS (2013) #3, early in Jonathan Hickman's "incursion" storyline: 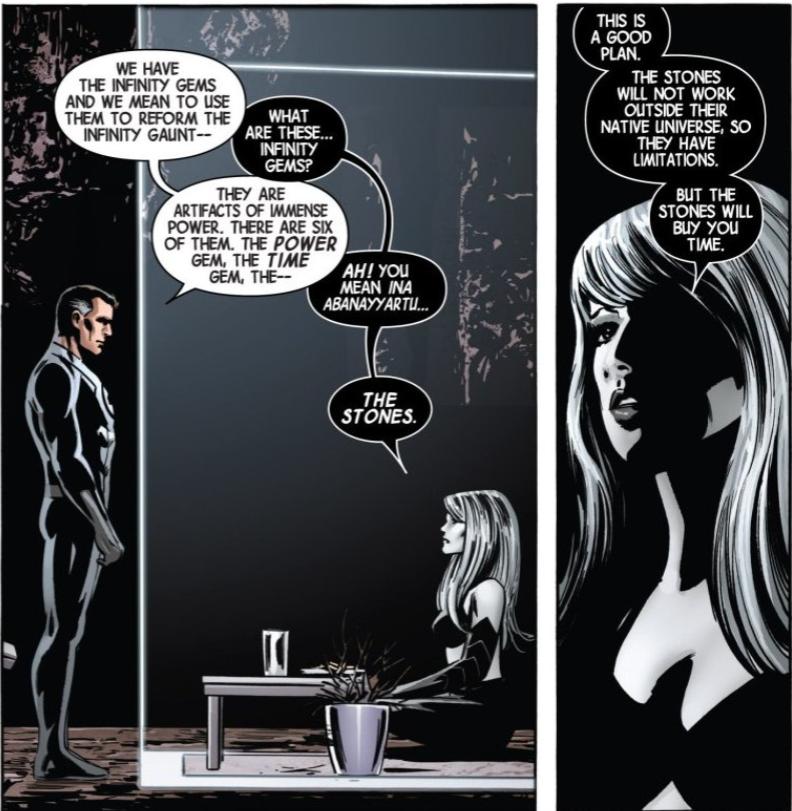 Apparently, the "limitations" mentioned by the Black Swan are what caused events later in the book

the Time Gem disappeared, and the other five gems seemed to be destroyed when Captain America used them to prevent the Earth from the other universe from colliding with ours, stopping this incursion.

Just in case you don't want to believe what a DC character says about a Marvel artifact....

NOTE: this may have relevance to the 2018 INFINITY event (presumably tying into the *Infinity War movie coming out), which has already shown that the Infinity Gems/Stones seem different than they did the last time we saw them. Since SECRET WARS in 2015, we are apparently in a different universe than we were (fairly firmly established in ULTIMATES and ULTIMATES2 after that event), so the stones being different kind of makes sense.

Others have clearly answered this using canonical sources. However I thought I'd give a little insight into why this is the case.

Thanos describes the nature of the infinity gems to the Runner in Thanos Quest, Book Two: 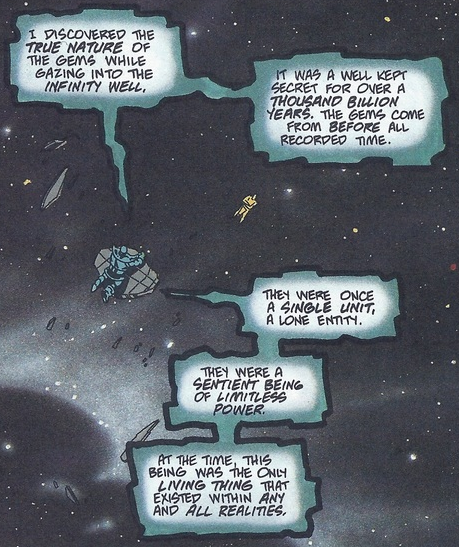 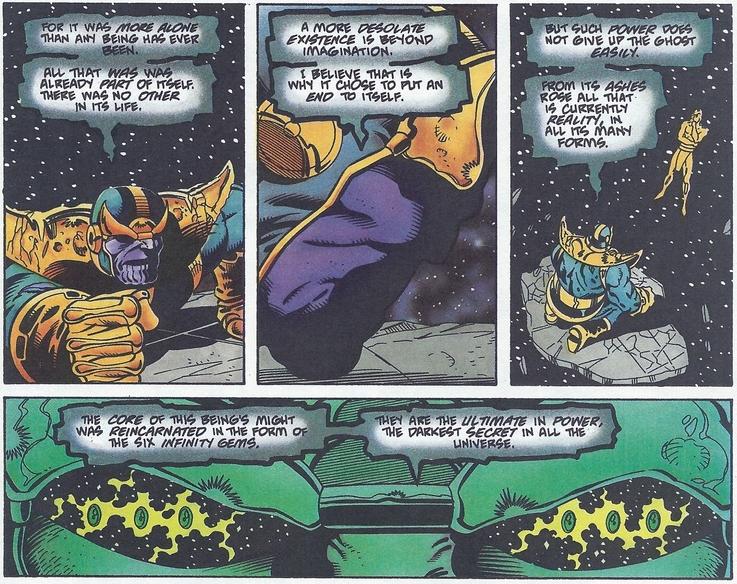 It's not exactly a complete explanation of why it wouldn't work in other universes, but I think it's not too hard to extrapolate. The infinity gems have power over everything else that came from the same being. Other realities in the marvel multiverse (or even DC) would have not originated from this being, so the infinity gems do not have power over them.

Thanos's comment about "any and all realities" I think should be taken to mean places like Asgard or the Dark Dimension or Mephisto's Hades which still exist in Earth-616. These are usually termed "dimensions" but not always. Further down he refers to the "current reality" as one, with many forms. So I think you can say "reality" here is always referring to Earth-616.

14
What comic books exist in the Marvel Cinematic Universe?
23
How many Marvel Earths (Universes) are there?
12
Is Avengers: Infinity War the first part of a two-part story?
15
The original Infinity Gauntlet
13
How does the *in-universe* Marvel Comics handle sensitive information like secret identities?
4
Is Thanos' desire to destroy half of the Universe true to the comic books?
3
Does MCU Infinity Gauntlet with Stones/Gems operate differently than the comic book version?