Book about 4 people stuck in a virtual fantasy game world

I read a sci-fi book maybe 15 years ago I can't find. It was older, from the 90's or 80's. It was about some people who were very good at RPG fantasy games or video games and were asked by this rich businessman to test out a virtual reality computer program his company made. The computer was an AI and had each of the players go in and asked them all about their lives, etc. to get to know them and better design the game.

Eventually it is ready and they go in. The CEO also goes in with them. He plays a rogue. They all have special abilities. The others play a warrior who could use any weapon expertly (even ones he's never used before), a guy who could heal people, a woman who uses a knife to cut shadows in reality and travels through them I think, and another woman who was married to the warrior who maybe could find things?

I can't remember much of the world except bad guys on demon horses that were black with scales.

After a while there is a weird thunderstorm in the real world that causes a ball lightning that floats into the building and hits the computer. The AI malfunctions and the players get stuck inside and it becomes dangerous. The CEO is eventually killed. I think some tentacle thing squeezes him to death?

At one point they are in an inn at night and one person gets hurt and the healer guy runs in naked to heal them.

Somehow they get out at the end but they find that they still have their powers in the real world.

I've looked for this book online but can't find it. Hopefully somebody else knows it?

Some Google-Fu led me to the book Caverns of Socrates by Dennis L. McKiernan, published in 1995. 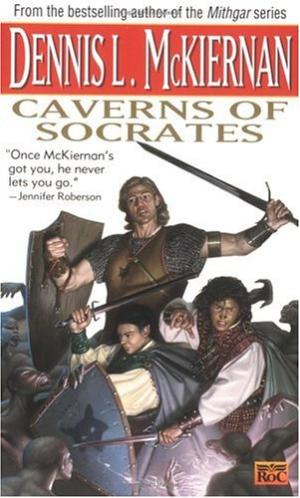 The description on the book link matches a lot of what you give, though you remembered four of the five characters. Areas that match have emphasis added:

They called themselves the Black Foxes, a group of adventure gamers who had proved the big winners in the virtual reality tournaments. In the "real world, " they were Alice, Caine, Eric, Meredith, and Hiroko - respectively, scientist, doctor, writer, antiquarian book expert, and art gallery owner. But when they became the Black Foxes they were transformed into: a pathfinder, a master healer, a warrior extraordinaire and leader of the Foxes, a bard whose music worked surprising magic, and a syldari Shadowmaster, able to bend the darkness itself to her needs. They had been chosen to participate in a unique experiment to help test AIVR, a supercomputer with artificial intelligence. Avery, as it was called, would create a virtual reality universe so convincing that the Black Foxes would forget the outside world as they undertook their journey. And so, under the watchful eyes of researchers, the contest between humans and machine began. Yet no one anticipated losing control of Avery. With the minds and souls of the Black Foxes trapped inside the machine's own private universe, their only hope of returning to the real world lay in carrying out a dangerous and deadly quest to defeat the DemonQueen and beat Avery at his own game....

I've never read it, but it seems to match.

Not the answer you're looking for? Browse other questions tagged story-identification virtual-worlds or ask your own question.