I think it's a cartoon based in the 90’s. It's about a team of people where each one has a vehicle that transforms. I know for sure that there was an ATV where the wheels slide down and it flies.

The villains are alien-like humanoids. They use metallic vises (or tentacles) and swing across buildings. Further in the show they caught a hero, and they turned him to one of the villains. This former hero went inside while being held down in a bed into a furnace that transformed him. He looks the same but he can switch to his alien figure.

I remember in the end of that particular episode the alien hideout blew up while the transformed hero was inside it.

After looking at some other animated shows roughly contemporaneous with M.A.S.K. and Exosquad, I came upon VOR-tech: Undercover Conversion Squad, also done by Universal Animation Studios.

The VOR-Tech Undercover Conversion Squad is a group of secret agents led by Hudson Roarke. Their mission is to stop Hudson’s older brother Damian Roarke — known as Lord Matrix — and his evil "Bio Mechs" from infecting the world with a techno-infectious plague. Similar to the M.A.S.K. franchise, the VOR-Tech agents had special masks and transforming vehicles, with special computer systems that imbue them and their vehicles with special powers.

They do have transforming vehicles. The series was put together because they planned a revival of M.A.S.K. but the Jim Carrey movie had just come out, making the name non-viable, so rather than scrap the molds from M.A.S.K., they just rebranded it.

It was cancelled after just one season, was never aired again, and never had a DVD release, so it's amazingly obscure, although this page has the intro and two scenes, one of which shows the "Bio Mechs", who indeed have tentacles. I have not found an episode list, so I don't know if there was indeed one where someone was partially transformed, but there is a mind control scene (which can be seen in the videos on the RetroJunk page), and it would fit the modus operandi of the "Bio Mechs".

Here is the toy of the ATV, "Battle Tracker": 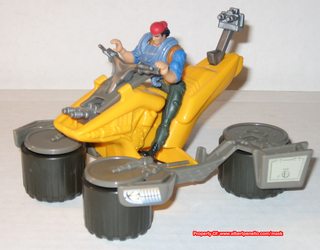 I think it's possible after all that you might be thinking of Exosquad. The main character drive exoskeletons, "E-frames", that exhibit a fairly wide variety of capabilities. The "aliens" they fight are actually genetically engineered humanoids named "Neosapiens" that humanity used as slave labor during the colonization of Mars and Venus due to the Neosapiens being able to survive in much harsher conditions than humanity. While the majority of the solar system's military is battling an alliance of pirates, the Neosapiens stage a violent revolt, and the series deals with the eponymous Exosquad, Able, who is fighting for humanity's survival.

Able Squad arrives on Venus with the mission of locating and estimating every Neo base and troop concentration on the planet, as a prelude to invasion. While investigating a secret research facility Rita Torres and Wolf Bronski are discovered, and in the battle to retrieve them Marsala is captured. He is taken inside, and sees that the facility is for research related to Automutation Syndrome (apparently a Neo sapien version of cancer). To prevent Marsala from divulging ExoFleet plans for an invasion Marsh sets out to destroy the facility with Marsala inside. Nara is unwilling to let Marsala be killed, and she goes to rescue him. She manages to succeed before Marsh finishes demolishing the complex, and on their way out she and Marsala unwittingly capture an experimental subject that merged with the Neo mega Lysander.

25
90s (or earlier) TV episode: man in a prison cell with a woman being changed into an alien
14
Title of story about human astronauts who crash on an alien planet with lizard-like humanoids
3
Short film with a “circle of life” theme, floating island dragon-like creatures hunted by people, people turn into dragon creatures when they die
7
Woman spy breaks into a govt facility. Finds spheres filled with little people fighting