Short story about military airships and a dragon corps

I'm looking for a short story that appeared in an anthology of either fantasy or science fiction stories.

Unfortunately I read the story in a used book store, so the book is also likely to be on the older side.

This looks like it may be Privateer by Margaret Weis and Robert Krammes. A Google book search shows a "General Dennis," a "Captain Jeantrou" and a "Lord Captain William Hastind."

The cover shows dragons and a flying sailing ship with cannon. 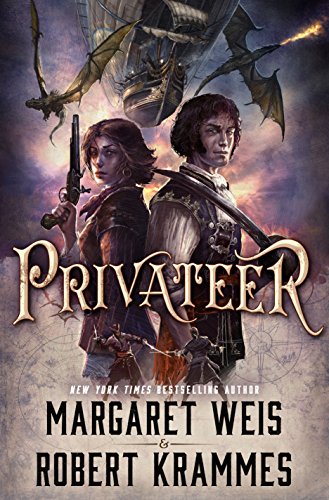 The Google books description mentions a "dangerous mission to the dark world of the Bottom Dwellers."

Not the answer you're looking for? Browse other questions tagged story-identification short-stories dragons steampunk or ask your own question.

14
Short story about an immersive video game with a fantasy dungeon crawl theme
16
Short story about alien military telepathy?
7
Horn of Winter = Dragonbinder?
9
Story about writing with special rare ink to make things happen just the way you wrote it
9
Looking for title of a fantasy fiction with huge war, invader on airship with warlock, island fortress with sorcerer, mnemonic storyteller and dragon
8
Story where one person cursed another in her dream, and the victim tried to undo the curse by "turning" her blood