Why does Azazel not have to see to teleport?

Nightcrawler has to see the area that he is going to teleport to. He explains the reason why in the 2nd X-Men film - that he can end up in a wall and die instantly.

So why and how can Azazel, the father of Nightcrawler, teleport anywhere without having to worry about ending up in a wall?

Azazel is, in the canon Marvel Universe, a demon-like mutant called a Neyaphem and father to Nightcrawler. The complete range of abilities available to the Neyaphem species is unknown. Being an immortal, demon-like mutant may grant him several powers his hybrid human son may not possess. It is also hinted that Azazel may have absorbed some of the powers of demons over his long existence. That may also give him senses or abilities most of the Neyaphem do not have.

Azazel may be able to teleport-without-error for a number of reasons including sensory, mechanical or biological adaptations. The basic power which appears similar to Nightcrawler's is teleportation to any distance, at any location on a planet. He may also be capable of interdimensional teleportation, as well. 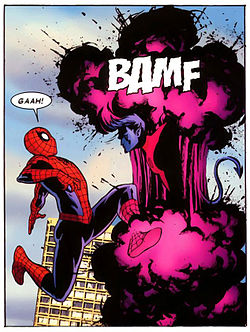 Azazel mechanics may be basically the same but his difference could be:

Nightcrawler, being a human hybrid, may have inherited the teleportation ability without the sensory, mechanical or biological safety additions to make his teleportation completely safe.

I think Azazel knew more about himself, so was better informed about his powers and how to use them, unlike Nightcrawler.

Not the answer you're looking for? Browse other questions tagged comics x-men teleportation marvel or ask your own question.

5
What is the maximum distance Lila Cheney can teleport to?
27
What timeline is the post-credit scene at the end of The Wolverine in?
8
Does Starfleet have self-activated teleport technology? If so, have they ever used it?
9
Why is Clint not entranced by Wanda Maximoff in Age of Ultron?
8
Why didn't the X-Jet use its cloak in X2?
3
Did Loki and Thor arrive at Asgard right after the Avengers?
5
Could New Orleans have been saved without Cloak & Dagger's solution?