So I’m trying to remember the title of the film, but I don’t know what it is. The movie took place in a desert and the characters were alien soldiers, which I think wore red and blue armor. In one scene, an alien soldier went to retrieve his rifle but the trigger was shot out by a human character the alien fought with moments before. The aliens spoke English but I just can’t figure out the title of the movie.

It might’ve took place on another planet but the desert was alike in ways of how one would look like on Earth, obviously. I think so, but I’m not too sure on that one. All I remember is like a squad of 4 aliens but I think one dies, and there’s a human involved as well.

Could it be the 2010 film, Hunter Prey as per Movie where a prisoner escapes from a crashed ship on a desolate alien planet? 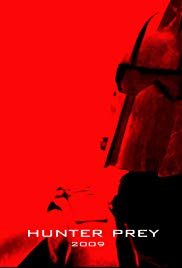 A group of elite interstellar commandos crash lands on a planet while transporting an alien prisoner. Amidst shifting loyalties among the group, they must track down and recapture the escaped creature, alive. The escaped prisoner sets traps and picks off the commandos one by one. When only Commander Karza and Lieutenant Centauri 7 are left, Centauri suggests they kill the prisoner, but the commander insists that he be taken alive, regardless of the mounting cost. The two engage each other in a tense standoff, and the commander reveals that the prisoner, the last survivor of a planet destroyed during a war, has threatened to destroy their planet in retaliation.

The standoff is interrupted when the commander is killed by a sniper shot. The prisoner declines a shot on Centauri and ambushes him. After he knocks the Sedonian unconscious, the prisoner reveals himself as a human. The human steals Centauri's supplies but leaves him alive. The human attempts to access the Sedonian computer database through a stolen communications device but is denied access. Centauri and the human, now able to communicate with each other, discuss the background of the war: Earth was destroyed because it accepted refugees of a Sedonian enemy. When a bounty hunter lands on the planet and attempts to take the human alive, Centauri intercepts him and captures the human, Lieutenant Orin Jericho.

As you can see in the trailer, the armor is red with some blue bits, and this review mentions the sabotaged gun:

The reason that Centauri 7 didn't kill Orin in the end was because Orin had sabotaged the rifle by messing with the bullets(46 minutes in when the two of them are talking over their communicators about how Orin is going to destroy the Sedonis homeworld Orin takes the casing off the glowing blue bullet and puts it back in without replacing it). It likely would have exploded, it's why he looked over at him and didn't duck or dive he just stood there waiting to see what would happen.

3
What 60s movie has a girl with alien and human identities who leaves earth with a human man?
4
1990s film, knockoff of Alien and Predator franchises, included a jetpack and a fanged frisbee
8
Alien movie - suit with a saw, egg in the desert
12
Low budget alien movie about the Earth being cooked
18
Movie with Aliens being sold on the Black Market
8
Movie where a man is injected with alien DNA that heals his wounds