Are the pipes in the Mario series made by Mario as tunnel entries to infiltrate Bowser's kingdom or are they a normalcy?

Is there any link available to a manual/source concerning the pipes in Mario games? Are they made by Mario as tunnel entries to infiltrate Bowser's kingdom or were they already there and Mario is making use of them? Mario is known to be a plumber and Bowser is not an industrialist. Most of his army is wild creatures. ⠀‎ Details such as this are frequently lost in localization. The same thing happened with Sonic's non-JP manuals. Most don't know that there was a consistent vision regarding the story since these materials weren't available in English. (e.g. Eggman always aiming to build a worldwide theme park, ancient gods being part of classic Sonic's story, etc.)

According to the Nintendo authorised comic Super Mario Bros. Special Edition #1, the tunnel network of warp pipes was created by the former inhabitants of the Mushroom Kingdom, mice. 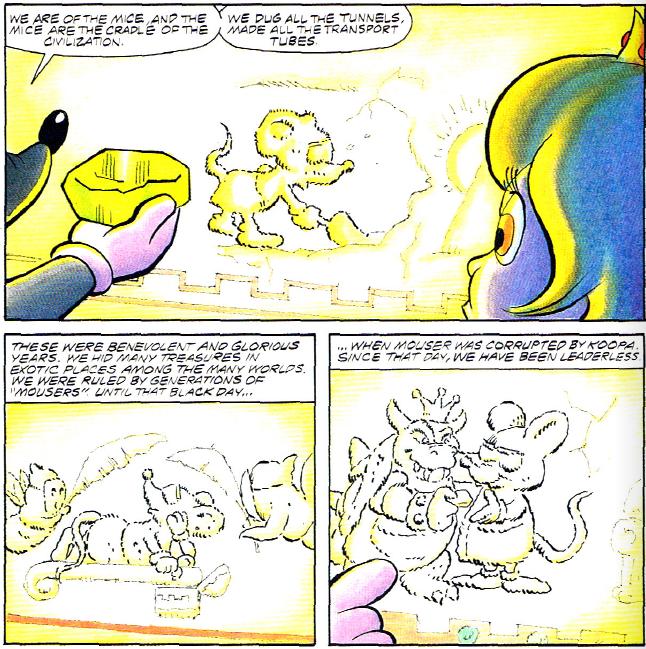 Pipes appear in Yoshi's Island 2 (example), where Mario is but a baby. Pipes also appear in Super Mario Galaxy (1 & 2) in galaxies that Mario is only seeing for the first time. Therefore, it wasn't Mario who created many (if any) of the pipes.

In Super Paper Mario, there is Welderberg who will create pipes for Mario for a fee: "I am the iron man of the forging of pipes! ... [I]t is my life's work to make the pipes for the transportation!" (See also this gameplay.) He clearly has an accent, which in the original Japanese was from the Kansai region of Japan according to the Game Fandom wiki (in Japanese).

It's also interesting to note the pipes in Daisy's homeland, Sarasaland (Super Mario Land, Gameboy), are different in appearance from the pipes that appear everywhere else, as they have segments. These segmented pipes can also be seen in the manga KC Mario #1. Sarasaland is also the only place where you can find giant fists in the pipes, as this gameplay shows. No explanation for this has been given that I have found.

Out of universe, Miyamoto cites manga as his inspiration for warp pipes. (And the manga got it in turn from real life, as there are places in Japan where these giant pipes called 土管 lay abandoned. More about these pipes can be read on Wikipedia in Japanese or translated via Google Translate.)

8
Are there any choices made by the player in the Mass Effect series that are considered canon?
4
Who are all the 'bad guys!' in Bad-Anon, and what game are they from?
41
How did the Mario Brothers discover/enter the Mushroom Kingdom?
2
Are there intentional similarities between the lighthouse and the dark tower, from “BioShock Infinite” and “Dark Tower” series?
9
Are Yoshis citizens of the Mushroom Kingdom?