What is the 90's PC antigravity/hover racing game called?

I played this game in the early to mid 1990's on a 486 or pentium, with a souped up diamond viper video card. To put this in the sci-fi genre, it involved a space race with fancy antigravity hovercrafts flying through a variety of alien landscapes. Each vehicle had distinct differences in terms of capabilities and looks. Some were heavier and harder to maneuver, but they could push others around easier, some were smaller, but more nimble. If I recall correctly, there was some sort of scifi backstory and setting. Their were different themed tracks, some desert, ice canyon, maybe even over water. The racing field was pretty crowded, maybe 10 or more competitors (only one human controlled, the others were AI).

Valorum's comment nudged me to do some digging on antigravity games (originally, I was thinking it was hovercraft and my searching was fruitless). I looked at Wipeout and the game mechanics were similar, but it wasn't the exact game. Next, I found Hi-Octane and I remembered playing it, but still not quite right. Finally, I found it! It was Slipstream 5000: 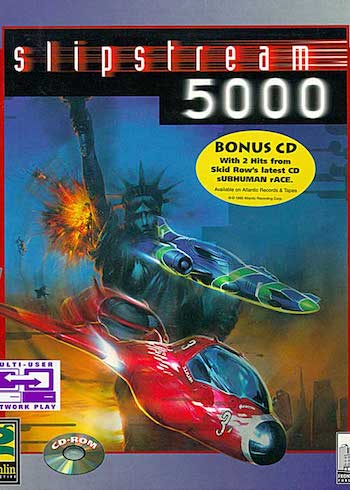 The game was released for PC in 1995. The vehicles are configurable. It can be played as a racing game or as a shootem' up. It has different tracks with canyon. The differences I found between memory and reality were that the vehicles are called aircraft and the field isn't that crowded, although there are about 10 vehicles in a race. The aircraft moniker is misleading as they operate more like antigravs than flightsims (not sure you can crash them and the physics is much more forgiving. More about the game here at wikipedia

My first impulse, given the timeframe, would be MegaRace, released in 1993. 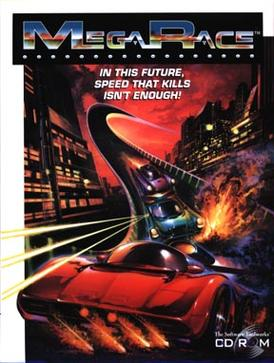 MegaRace takes place in the distant future, where the player is a contestant on a game show, called "MegaRace". MegaRace is on the VWBT (Virtual World Broadcast Television) television channel where contestants compete in a live-or-die race match against Hells Angels-like speed gangs. MegaRace's host is the eccentric Lance Boyle (played by Christian Erickson). He guides the player throughout the game, introducing new levels and enemies, frequently discouraging the player.

The non-matching part is that the cars had wheels, although they maneuvered a lot like hovercraft due to how the game pasted the car onto live-action footage of the track.

FuzzyBootsFuzzyBoots
161k1414 gold badges470470 silver badges701701 bronze badges
1
Add a comment  |
0
Want to improve this post? Provide detailed answers to this question, including citations and an explanation of why your answer is correct. Answers without enough detail may be edited or deleted.

Hy i think the HI Octane is the game you looking for.

6
In what game do you play a knight fighting skeletons in a cemetery at night?
11
In Wolf Among Us what is the significance of the cigarettes found throughout the game
10
Trying to find a book called The Game
2
Does the game from “The Game” have a name?
6
What is the name of this sci-fi strategy video game?
5
Strange poorly progammed puzzle game for the PSP, with Dragon Kids. and towers
4
What game is John playing?
2
What is the game on the Shrek DVD that allows you to rescue Fiona?