I have memories of a fantasy movie that I watched as kid, yet I can't remember the title or a single character's name! The protagonist was a boy. I know that it took place in a fantasy realm, possibly starting on Earth and then traveling to that fantasy realm. There was definitely an older mentor in the film, who is murdered by the main villain in combat. The villain was very pale and I remember a shot of the dying mentor with a diagonal slash across his face from the villain's blade.

It was definitely live-action, in color, I remember watching it on VHS in English, probably got it from Blockbuster in the US, pretty sure the world had some form of magic in it, at least some of the fighting was martial-arts-esque, pretty sure (but not positive) there were sentient non-humans (maybe like Ewoks but wiser/less ridiculous). I believe the swords were metal, not laser swords or anything, and at least the villain used a large curved sword/scimitar

From the wiki summary (emphasis mine):

Ryan wakes in a strange forest and is attacked by assailants who are drawn off by a creature from the lake. He screams and runs in fear, but soon realizes his leg works. He meets a dwarf-like man named Mudlap where a beautiful girl named Elysia drives him off. She tells Ryan that he is in Tao. Ryan tells her about the manuscript, which had been stolen with his backpack. Believing it to be the Manuscript of Legend, Elysia takes Ryan to Master Chung and he meets four of the five warriors, anthropomorphic kangaroos each representing an element: Lai, Warrior of Wood; Chi, Warrior of Fire; Tsun, Warrior of Earth; and Yee, Warrior of Metal. He is told that Yun, the Warrior of Water had left them following an earlier conflict. Ryan thinks that the creature that saved him is Yun and that he has the manuscript. He is told that the manuscript would be sought by Komodo, a warlord who betrayed the Warriors and is stealing from the Lifesprings of Tao in order to stay young forever where the Warriors are protecting the last Lifespring. While talking to Elysia, Ryan is captured by Mantose, Barbarocious, and Dullard, but is saved by Yun who admits he doesn't have the book leading Ryan to believe Komodo has it. He convinces Yun to return to the Lifespring.

Ryan flees, wanting to return home, but Mudlap leads him into General Grillo's arms and he is saved by Chung. Yun, Yee and Chi go after the manuscript and fall into a trap after being betrayed by Elysia, who joined Komodo as vengeance against Yun for killing her brother by accident. They are nearly killed in a trap, but narrowly escape using their skills and they return to the Lifespring to prevent Komodo from ambushing the others. Komodo attempts to kidnap Ryan, but instead fights Chung. The battle is brutal, but Chung is defeated and killed by Komodo who then makes off with Ryan.

Here are pictures of the Warriors and the villain (played by Angus Macfadyen who is probably best known as Robert the Bruce in Braveheart). Komodo's main weapon is a sword, though it is a uniquely shaped one as seen in the third picture. 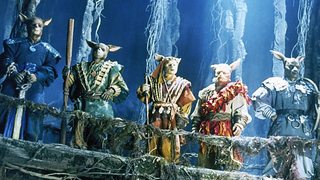 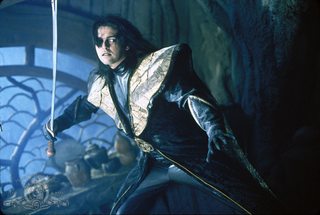 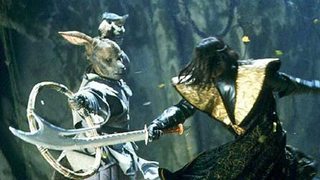 5
80s(?) animated scifi/fantasy movie with spaceships, a fantasy castle, and a princess wrapped up in a carpet by bad guys
6
Trying to find the name of a fantasy book I read in the 90's
6
Late 80's early 90's film. Time travel and heads exploding
7
Movie about a rogue / martial artist brought to the present, rides a scooter at some point?
9
Dark, fantasy animated movie where the antagonist is a tall humanoid with an eye patch, who fights the hero totally naked after his spaceship crashed
7
Asian fantasy movie with a medieval setting, and a hero, a princess, and an evil general