How does Mickey Mouse's "upslide" work?

If a magic slide isn't fantasy I don't know what is.

I've been watching The Mickey Mouse Clubhouse with my 21 month old and I'm becoming more and more frustrated by the "Upslide".

When one person goes on the upslide, let's say Mickey, he sits on it backwards and the upslide pulls him up. When he comes back down he's facing the right way. Cute.

When multiple people go on the upslide (for example, on the episode Daisy's Grasshopper, see video )

The only way it could do this is if it treated the entire person-load of the upslide as one entity. If this is the case, how big is the buffer capacity of the upslide? Have the inner workings of the upslide been explained in any Mickey Mouse episodes or books? Or is this one of Professor Von Drake's tightly kept secrets?

Taking the upslide for granted (which I could only explain if Mickey had some big magnets in his pockets -- and even then, the movement wouldn't be linear, but parabolic), this can make sense, depending on the slide's architecture.

I've drawn a picture that highlights one possible architecture, omitting the curliness of the original slide. However, in order not to infringe on Mickey's precious copyright, I took the freedom to put Tuxes on the slide. 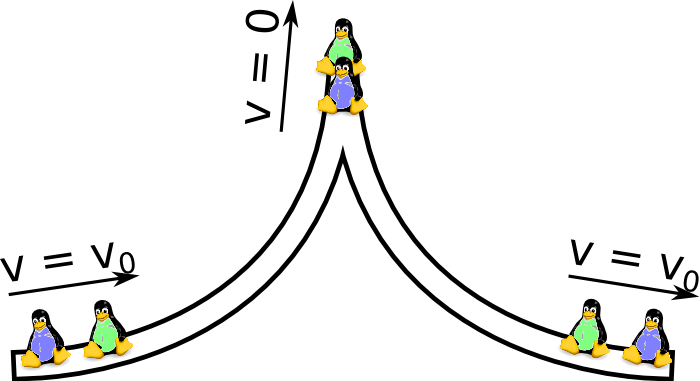 In the picture, the blue tux is sitting in front of the green tux, that is closer to the end of the slide (like Mickey in your video). If the upslide magically slides them upwards with an initial velocity of v0, they will end up in a position in the middle, the blue tux being closer to the ground. I'm assuming that the slide is high enough so that all initial kinetic energy of the tuxes can be transformed into potential energy, meaning that they come to a full stop for an infinitesimal amount of time (v = 0).

At that point normal physics kick in and gravity pulls them down. Choosing at random (if the slide is built in a safe fashion, otherwise ... well let's say the occupants couldn't have future offspring otherwise) or with a bias the right side of the slide to descend. Note that this will restore the original kinetic energy and they will get off the slide on the same velocity as initially accelerated to (if you disregard friction) as well as it restores who was sitting in front (i.e. the blue tux).

Note: This is not canonical, but I don't think Disney would bother with physically correct entertainment apparatuses.

Not the answer you're looking for? Browse other questions tagged disney or ask your own question.

14
How did Mother Gothel know (or work out) the 'Flower Song'?
11
Frozen - Does Elsa unknowingly thaw ice?
21
Does Anna regain her memories?
3
Does Tapper ever get outside his game?
8
Old Mickey Mouse comic where Mickey thwarts a bank robbery by making the building fall into a giant hole in the ground
4
What does this code from Ducktales mean?
1
Does the Mickey Mouse universe ever acknowledge non-Disney owned characters?
5
How does Sonic know what Wi-Fi and the Internet are?
2
Over how long a period of time does Enchanted take place?