I read this short 1930s story in the 1960s; it was certainly in one of Ultimate Publishing's magazines - Amazing, Fantastic, or one of their all-reprint mags. All I can remember is that some kind of giant nuclear fire is threatening the whole world - how it started I don't know. The MC flies a helicopter past the flames, scoops up some of the ash, and - in an eerie foreshadowing of Chernobyl - spreads it on the flames to put them out. He succeeds, but at a cost - he has aged far beyond his years. The author had the rather odd idea that it is cosmic radiation that causes living things to age and die and the hero got an extra dose from the flames.

"The Flame from Nowhere", a short story by "Eando Binder" (pseudonym of Otto Binder); first published in Amazing Stories, April 1939, available at the Internet Archive; reprinted in Amazing Stories, December 1966. The excerpts below are from the original 1939 publication, not necessarily identical to the 1966 reprint you read. The illustration by Julian S. Krupa, copied below, accompanied both the original 1939 publication and the 1966 reprint.

The circle of atom-fire would spread, consuming all in its path. Mountains, trees, rivers — even the oceans would burn, for they were its fuel too. Cities would crumble, vanish — all life would be destroyed. But the atom-fire would continue greedily, sucking down the air to burn it. Then it would eat inward, like a cancer, to the center of earth, till the world he knew was nothing but a cinder.

— how it started I don't know.

"Dear Dan," it began. "Northern Wisconsin is God's own country, but of course I did not come here, last year, to enjoy the climate or scenery. I came here for seclusion in my research, and secondarily to keep from blowing up half of Chicago — in case. You will see what I mean later.

"My cosmic-ray photon collector is a wonderful success. I'm proud of it. It is, as you remember it in cruder form, a large glass bulb coated with pitch and supported in a magnetic field. The magnetic field refracts the entering radiation enough to make the photons rebound from the neutron-screen embedded in the pitch covering. I won't go into full detail. You know most of it.

"At any rate, my dream has come true. The cosmic-rays rain down as a veritable flood of energy from interstellar depths. I've been collecting cosmic-ray photons for eight months, in my glass bulb. I have close to a milligram of them. You recall, of course, that a pound of pure energy — say in the form of infra-red waves — is enough to melt thirty million tons of rock.

The MC flies a helicopter past the flames, scoops up some of the ash, and - in an eerie foreshadowing of Chernobyl — spreads it on the flames to put them out.

Fortunately, the thirty feet of landing space needed by the gyrocopter was free of dangerous rocks beneath the obscuring black blanket that lay over the ground. Nelson jumped out eagerly and picked up a handful of jet black matter that trickled as a coarse powder through his fingers. It seemed peculiarly heavy. 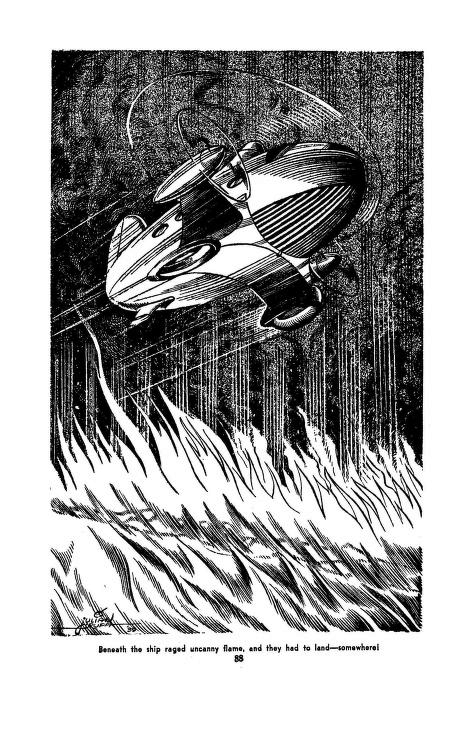 He succeeds, but at a cost - he has aged far beyond his years. The author had the rather odd idea that it is cosmic radiation that causes living things to age and die and the hero got an extra dose from the flames.

But the sheriff was groaning. "You're an old man, Nelson! You look like an incredibly old man!"

Nelson’s gaunt, wrinkled face drew up in a senile grin.

"Yes, I am an old man, because I went in and out of the flame-curtain many times, touched by the atom-fire. Old age is an effect of the cosmic-rays — bathing our bodies all our lives and slowly disintegrating them internally, filling them with isotopic poisons. I passed through that process in a few hours, in the bath of disintegrating flame. I lived a lifetime in there!"

Share
Improve this answer
edited 2 days ago
answered Jan 13 at 6:03