There is a ship travelling to a planet for a reason I do not remember. On their voyage, one man (let's call him Bill) is woken up a couple of years early. The ship was only stocked with food to last all of them a couple months. Bill does his best to ration the food but after sometime, he runs out. He still has a long time to go before they reach their destination. He becomes so hungry that he resorts to eating one of the sleeping crewmates. As he opens their pod, they wake up and they struggle for their lives. Bill eventually prevails and ends up killing him.

He becomes addicted to human flesh that he overeats like never before. After eating, he loses a lot of meat due to it becoming rotten. So as he continues to kill/eat his crewmates, he becomes better at the whole process. Faster forward, he basically has killed everyone on the ship as they approach their destination. When they finally land, he expects a warm greeting but is met with a flood of people that only want one thing. Him.

The Taste of Starlight by John R. Fultz, published in the Lightspeed: Year One magazine in 2011. 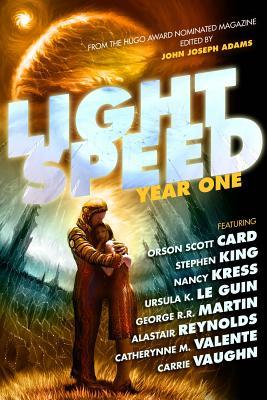 You can read the full story here, but here's a brief summary from fullofwords.com:

The Taste of Starlight tells the story of a doctor on a seven-year interstellar mission to a far-off colony. A systems malfunction causes his cryopod to open early, and he becomes the only person awake on the ship with more than a year left to go before landfall. He discovers that there arenâ€™t enough emergency rations to last him for the whole tripâ€¦ and Iâ€™m sure youâ€™ve figured out where this is going.

23
Short story where a doctor wakes early from hyper sleep and slowly cannibalises the rest of the crew?

14
What TV movie has a man seeing glimpses of dystopia in his utopian world?
20
Short story from 80s or 90s about man waking up from stasis
5
500 year post-apocalyptic story where soldier awake from cryogenic sleep
23
Short story where a doctor wakes early from hyper sleep and slowly cannibalises the rest of the crew?
12
Man eats alien matter transmitter and almost starves to death
9
Story where real food is illegal but there is an underground org to rebuild