Book involving attempts to find a war-winning space ship and weapon, which turn out not to exist [duplicate]

The premise of the story is that the human race won a war against an alien race years before, using a ship equipped with a radiation based super weapon that wiped out most of the enemies' fleet in one shot. After the war was over, it was declared that the weapon was so powerful and horrific that the humans would dispose of or hide the ship so it couldn't be used again.

The book covers the need to use the ship again, and follows the progress of a group of people who seek to find the whereabouts of the ship without government approval. One of this group was a female pilot who I think had a neural connection, and I also think the neural connections may have been outlawed after the war, due to the way in which they can be used to control their owners (I may be misremembering, or remembering another story, but there might have been something about an entire platoon or company being wiped out this way).

The end of the story is:

The ship doesnt exist, the weapon never existed. The human fleet instead forced the battle to occur in a solar system where the star was about to undergo a solar event, which gave off vast quantities of radiation; the human fleet planned for this and funnelled some of the radiation at the enemy fleet, destroying them.

Conquerors' Pride, first published in 1994. First volume of a trilogy by Timothy Zahn. (The other two volumes are Conquerors' Heritage and Conquerors' Legacy. It appears that the entire trilogy is sometimes just called "The Conquerors.")

Here's the original cover art. It might ring a bell? 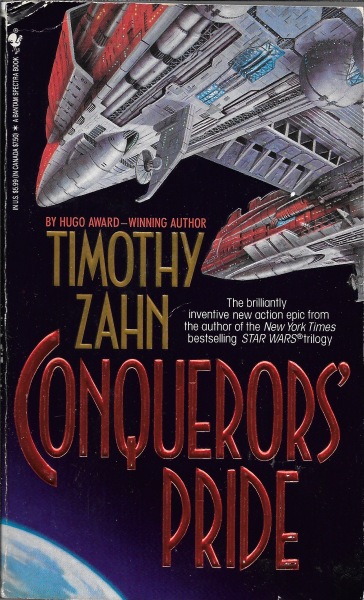 As the story opens, part of the backstory is that many years ago an interstellar war was won (by the human side) thanks to a super-duper secret weapons system called CIRCE, possibly involving tightly focused ion beams, which wiped out 100 percent of the crews of the battle fleet of an alien race called the Pawoles, but left the ships themselves pretty much intact.

In the present day (thirty-seven years after the previous war), we see a new war accidentally starting between humans and a newly-encountered militaristic alien race who call themselves the Zhirrzh, but the humans start calling them "the Conquerors." The widespread hope on the human side is that the government of the Northern Coordinate Union ("NorCoord" for short) will rebuild CIRCE so that it can be used to once again win a war by wiping out the crewmembers of an entire fleet in the proverbial blink of an eye, and this calamity will scare the surviving Conquerors into calling the whole thing off before further bloodshed occurs. (This was what happened with the Pawoles after the Battle of Celadon.)

Near the end of the first book, a man named Ezer Sholom, a retired journalist, is recovering from a hypnotic drug which was recently used on him. Much to everyone else's surprise, Sholom begins spilling his guts about the truth behind the one and only recorded use of the CIRCE weapons system.

"None of us are going to be safe, Brigadier Bronski. Not from the Conquerors; not from anyone. I know, you see," he said, his voice dropping conspiratorially. "I figured it out. No one knew that I had; but I did. And I never told anyone. It was a fluke of nature, you see. A million-to-one coincidence. Maybe even a billion to one. But NorCoord was clever. Or maybe just desperate. Or maybe just too proud to pass up the chance. They took what happened and ran with it. Came up with a soap-bubble explanation and name and a way to use it. And it worked. It ended the war."

Bronski looked at Eisen again, got a puzzled shrug in return. "I don't understand," he said to Sholom. "What you are talking about?"

"Celadon, of course," Sholom said quietly. Suddenly the dreaminess was gone from his face; and in its place was the same guilt-tinged fear that Cavanagh had seen in Fibbit's threading of him. "It was the surge from a massive solar flare. That's all it was. Coming up just as the Pawolian ships sprung their trap. It came up behind them, you see, just as they left the protective cover of the planetary umbra. They couldn't see it coming, of course—they were in the umbra. A million-to-one coincidence. Maybe a billion to one."

"Sir?" Eisen put in urgently, jerking his head toward Cavanagh. "I don't think civilians should be hearing this."

"It's all right," Bronski said, his voice grim. "Anyway, it's already too late. Go on, Mr. Sholom. What happened then?"

Sholom's lip twisted. "What do you mean, what happened then? It killed them, of course, that's what happened then. All that radiation surged right up through the drive nozzles where there weren't any dipole protection fields. and then it just bounced around inside the ships. Focused and concentrated by all that superdense metal and liquid reflectors that were there to keep radiation out. Bounced around until it killed them."

Incidentally, Sholom mentions a bit later in this scene that he kept the secret because the mythical superweapon was, in fact, keeping the peace. But all of the characters present in this scene are quickly realizing that a mere myth that can't be demonstrated to the newly-encountered Conquerors isn't likely to make them throw in the towel, is it?

In other words, it's time to get cracking on figuring out some other way to solve the current problem.

P.S. Obviously I didn't bother to reread the entire novel before answering this question, but a quick search for the word "neural" in the text did not turn up a single hit. So I think, as you had already suspected might be the case, that the bit about a female pilot with a dangerous neural connection is probably a memory of some other science fiction novel which you read back in the 1990s.

Incidentally, I found some other old questions on this site which had attracted answers which offered up Conqueror's Pride, or the entire trilogy, as the correct identification of a story, but none of those mentioned the part about the scary superweapon turning out to be a fraud, so I figured just offering a link to one of those answers wouldn't have done you much good. But now I'll throw in links to two Story-Identification questions which have answers which were accepted at the time.

Story about a space war, and a human prisoner of war captured by alien enemy

24
Story about a space war, and a human prisoner of war captured by alien enemy
5
Book about attack by aliens that decimate entire human fleet and take a single prisoner
13
Sci-fi story: Earth maintained peace by claiming they had a super weapon. The "demonstration" of the test was actually a freak solar flare