Who is Stan Lee talking to in his cameo in "Guardians of the Galaxy"?

The person he is talking to looks quite familiar, I think she appears in other MCU contexts as well.

No one in particular1

The actress that plays the character is Nicole Alexandra Shipley and here is the MCU wiki page for her. She only appears in Guardians of the Galaxy and only in Stan Lee's cameo where she is credited as "Pretty Xandarian". So, as of yet, she's a nobody in the MCU. 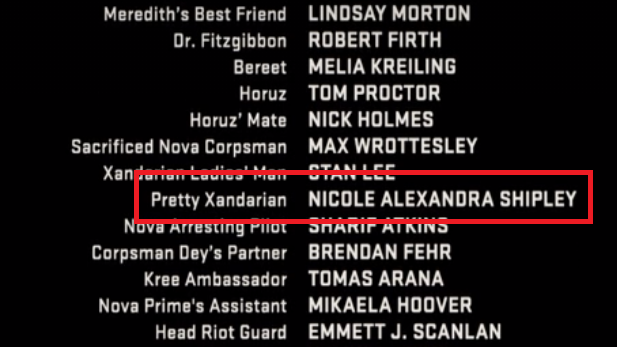 1. Disclaimer: so far she is no one in particular but that could change even if I doubt it.

Not the answer you're looking for? Browse other questions tagged marvel marvel-cinematic-universe guardians-of-the-galaxy-1 stan-lee or ask your own question.

20
Who are the Guardians of the Galaxy?
65
Is Stan Lee playing the Watcher in all his cameos?
14
What character is this black cat figurine in Guardians of the Galaxy?
25
Which Marvel movies have NOT included Stan Lee cameos, and why?
26
Has Stan Lee ever made a cameo in a comic book?
15
Is there any significance to Stan Lee's cameo in the Incredible Hulk?
14
Has it been officially confirmed that Stan Lee was talking to Watchers?
49
Did Stan Lee finish his cameo shooting for the upcoming Avengers 4 movie?
16
Were there two appearances of Stan Lee?