I vaguely remember reading in a comic book where Batman said something along the lines of:

If I could rescue one person, it would be Wonder Woman.

Also, most probably it was followed by a panel showing Wonder Woman captured. The artwork seemed similar to Justice League of America (2007) comics(?).

story-identification dc comics
Share
Improve this question
edited May 20 at 20:55

Pretty sure this is Justice League of America Vol 2 #13.

At the start of the issue, Batman and Wonder Woman have both been captured by the Injustice League. Batman soon frees himself from the straightjacket that was placed on him, and then states the following:

BATMAN: Even assuming that the guards are careless -- and they are -- I've got, optimistically, another sixty seconds until my escape is discovered. Just enough time to free one of the others. And if I can only pick one, it's her. Wonder Woman is the best melee fighter in the world. 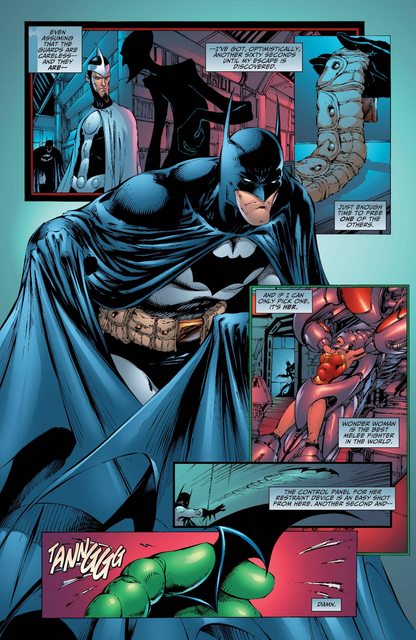 14
The New 52: What Titles Don't Mix Continuity For New Reader?
8
Identify a story in which Watch Tower was crashed on the Moon and Wonder Woman murdered a guy
23
What are the Justice League members’ weaknesses?
6
Superman/Batman/JLA continuity
7
Who is the medium sized Robin?
5
Is Superman more powerful than the Greek gods?
6
Conan-ish fantasy comic from late 80s to early 90s with scantily dressed main characters fighting skeletons in a cave/dungeon
24
Short comic about alien explorers visiting an abandoned world with giant statues that turn out to be alive but move very slowly
3
Justice League comic where the Arkham Asylum gate is locked with a Kryptonite chain
6
Spinoff / Alternate Universe of DC Comics involving mother earth rising up?