Werewolf movie where the chief clue is enhanced senses

I haven't watched this movie, but heard this from a friend and it interests me, so I'm here to ask.

These descriptions are not entirely accurate as they were rephrased and translated.

I believe this might be the movie Wolf with Jack Nicholson, Michelle Pfeiffer & James Spader.

Male lead gets wounded by a wolf on the night of a full moon, and he doesn't pay much attention to the wound. After this the male lead's sense of smell is enhanced a lot.

Nicholsons character is bitten by a wolf his car strikes while driving at night in Vermont.

The male lead once handcuffed himself in the bed at night, to constrain himself from turning into a werewolf and hurting someone.

He cuffs himself to a radiator.

Rather than hear things a long way off, she shows hightened senses by smelling alcohol on the policeman's breath from some distance away.

Laura herself shows heightened senses when the police arrive; telling Bridger that she can smell vodka on his breath before taking her leave

I enjoyed the movie myself, but remember being confused, it's the first movie I saw where the characters were obtusely - danger TV Tropes link - genre blind

Selectively quoting from the synopses on Wikipedia and IMDb:

Bitten by a wolf:

Will Randall [Nicholson] is bitten by a black wolf he accidentally struck while driving home in Vermont. 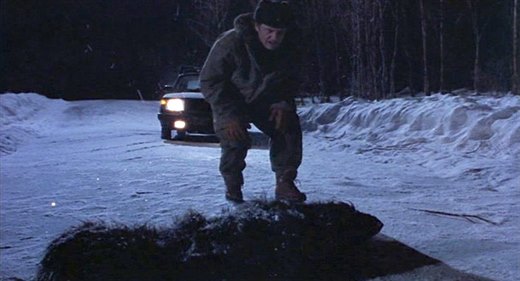 Will [...] that Stewart is having an affair with his wife Charlotte, after he smells Stewart's scent on her clothes.

Handcuffed himself in the bed at night:

He cuffs himself to a radiator in his hotel room, but Laura arrives and downplays his belief that he is werewolf.

Complains to the female lead about making too much noise tidying her hair:

WILL: And finish drying. The sound of that towel is driving me crazy.

LAURA: Are you telling me that you hear what I'm doing over the phone?

Will fights another werewolf to protect the female lead:

After killing two guards at the estate, Stewart [Spader] corners Laura [Pfeiffer] in the barn with the intention to rape her, but Will intervenes after discarding the amulet restraining him and the two fight 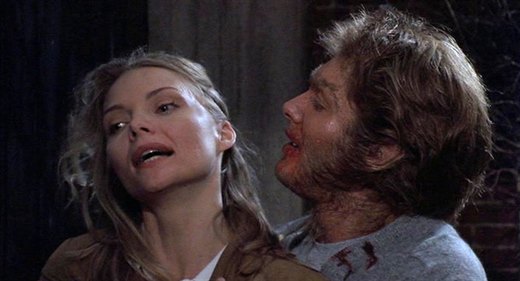 This hints she is becoming a werewolf:

Minutes later, Laura herself shows heightened senses when the police arrive; telling Bridger that she can smell vodka on his breath before taking her leave. The final scene is a close-up of her face and of Will finally turning into a full wolf howling for Laura. Then it goes back to Laura's face as her eyes become wolf-like, hinting that she herself is transforming into a werewolf. 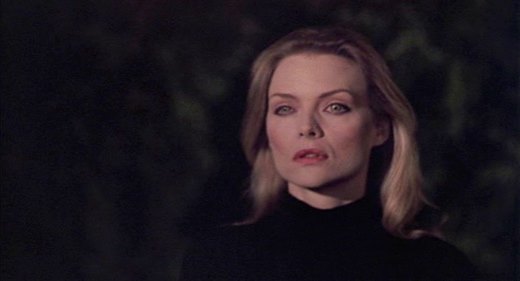 Not the answer you're looking for? Browse other questions tagged story-identification movie werewolf or ask your own question.

7
Looking for a werewolf movie (comedy) where the cameraman is shot
7
A witch, a cat and a vampire are fighting for the survival of two worlds together with a dragon, an incubus, a human and a werewolf
12
Cynical vampire and her underwear-stealing lover
30
Movie: Scientists travel to the future to avoid nuclear war, last surviving one is used as fuel by future humans
5
80s/90s Adventure Sci-fi Movie about Biological Lab