Sci-fi book where a scientist, researcher and special agent on Mars was communicating with telepathic cat-like creatures

I am searching for a sci-fi book where a scientist, researcher and special agent on Mars was communicating with telepathic cat-like creatures, to sort out a local conflict.

In the story there was a social struggle on the planet, and the telepathic cats were the key to solve it. They are small animals, not violent, and very intelligent. I recall a vague figure of desert area with a person and a furry creature nearby.

I read this about 40 years ago in Italy. It was translated into Italian from the original language.

Any idea which book this was? It is not the book asked about in Sci-Fi: Story about an astronaut and telepathic feline-like aliens. 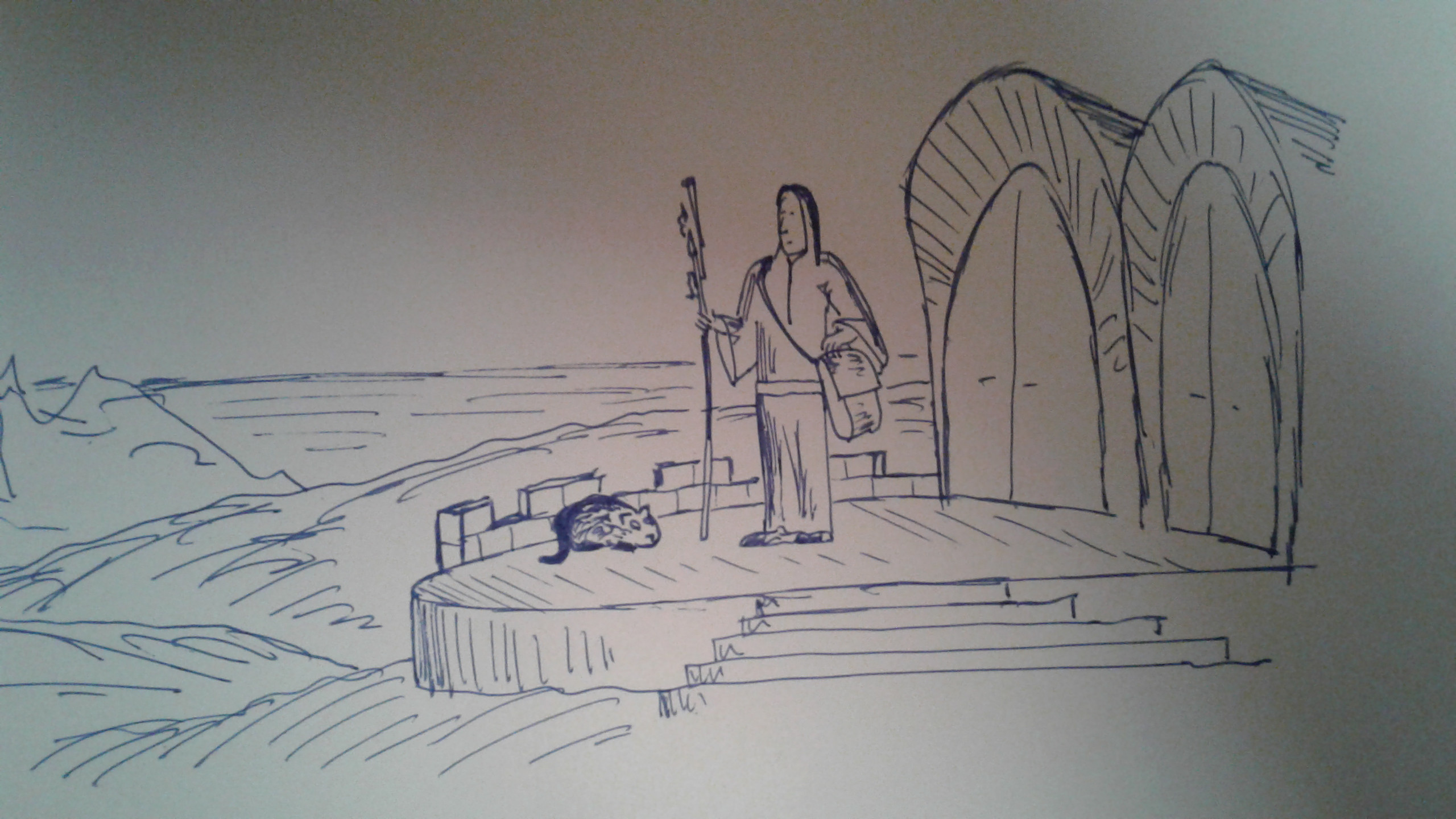 I sketched the image I have in mind about this book... after 40 years it may not be exactly the same...

This could be a partial match to Space Prison/The Survivors by Tom Godwin. You can find at least some covers here

In this story, which takes place over several generations of humans, the protagonists are marooned on a planet called Ragnarok. Ragnarok is a high gravity planet with a very harsh environment, having long very cold winters and very hot summers and a variety of dangerous animals.

It turns out that there are two different telepathic animals called "mockers" and "prowlers". Mockers are:

... six little animals the size of squirrels, each of them a different color. They walked on short hind legs like miniature bears and the dark eyes in the bear-chipmunk faces ...

... The two mockers were pleasant company, riding on their shoulders and chattering any nonsense that came to mind. And sometimes saying things that were not at all nonsense, making Humbolt wonder if mockers could partly read human minds and dimly understand the meaning of some of the things they said

On the other hand, prowlers are violent cat-like creatures, who terrorize the marooned people at first:

They were things that might have been half wolf, half tiger; each of them three hundred pounds of incredible ferocity with eyes blazing like yellow fire in their white-fanged tiger-wolf faces. They came like the wind, in a flowing black wave, and ripped through the outer guard line as though it had not existed. The inner guards fired in a chattering roll of gunshots, trying to turn them, and Prentiss's rifle licked out pale tongues of flame as he added his own fire. The prowlers came on, breaking through, but part of them went down and the others were swerved by the fire so that they struck only the outer edge of the area where the Rejects were grouped.

This goes on until one of the survivors helps rescue a mother prowler and her cubs, eventually leading to the "domestication" of the prowlers and their eventual use in the defeat of the aliens who marooned the humans on Ragnarok.

There seemed no way that men and prowlers could ever meet on common ground. They were alien to one another, separated by the gulf of an origin on worlds two hundred and fifty light-years apart. Their only common heritage was the will of each to battle.

But in the spring of one hundred and sixty-one, for a little while one day, the gulf was bridged.

This is also not a complete match (in particular there's no secret agent) but it hits many of the other points. Notably, Lost Race of Mars (1960) by Robert Silverberg did have an Italian translation Su Marte segui il gatto (1972). The cover art doesn't match your sketch, but it was an illustrated book so that may have been interior art.

The heroes of the story, Sally and Jim Chambers, are the children of a biology professor who has been given a one-year research grant to study life on Mars. Having a "non-productive" researcher, plus his family, on Mars leads to a fair bit of conflict with the colonists who resent them.

On Mars, Dr. Chambers is brought some live native animals by a mining engineer who was prospecting. One of the animals is furry and cat-like:

It wasn't exactly a kitten. It had the grace and sleekness of a full-grown cat, but it was no bigger than Chipper had been when he was six months old. It resembled a cat only in it's litheness and its softness, and in general body shape. It had no claws, though, just flat pads that were probably better for desert travel. It's eyes, which were large and solemn, were protected by the usual transparent eyelids. Its body, beneath the covering mass of dark fur, was lean. It squirmed and wriggled, and then cuddled itself up contentedly in the crook of Jim's arm.

The "cat" is very intelligent, far more intelligent than a dog, but here it is the Martians themselves who are telepathic.

The discovery of living Martians, contact with them, and the potential value of trading with them for Mars-adapted plants (like the ones that make their air), convince the rest of the colonists that having some people around doing undirected research can have great value, and they stop resenting the Chambers and invite them to stay.

I wonder if you might have read an Italian translation of Little Fuzzy by H. Beam Piper? The book was first published in English in 1962, and translated into Italian as Il piccolo popolo that same year, so it fits your time frame.

It is not set on Mars, and the gentle Fuzzies aren't cats, but the conflict and its resolution, the researcher (more like prospector), an antagonistic scientist, and various corporate and government agents are present, and the Fuzzies help resolve the central conflict by demonstrating their sapience. While the Fuzzies are not telepathic, they do communicate by ultrasound, and humans not realizing this—not understanding how they communicate—is part of the plot. There are also some sequels.

Below are a few English language covers, some of them depict a cat-like (if bipedal) Little Fuzzy: 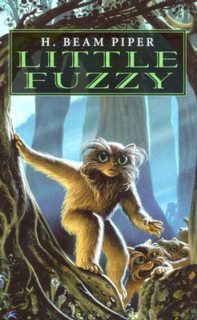 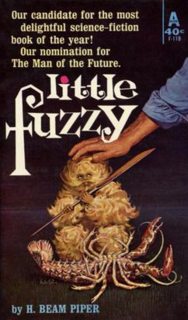 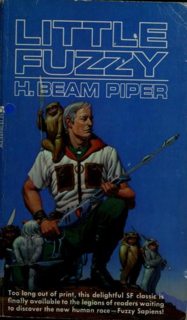 And here are some covers of the Italian translation of Little Fuzzy, Il piccolo popolo by Bianca Russo: 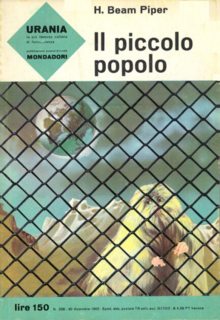 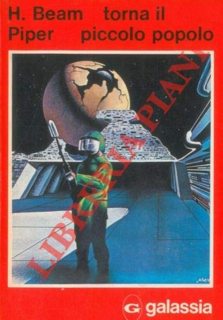 Not the answer you're looking for? Browse other questions tagged story-identification books telepathy mars or ask your own question.

10
Sci-Fi: Story about an astronaut and telepathic feline-like aliens

9
What was that Sci-fi book mixing classic art and book excerpts to build a timeline of the universe?
6
Novel about a scientist communicating telepathically with cat-like aliens?
6
Fantasy/Sci-Fi kids book: boy and telepathic owl/bird - in space/other planets setting
8
YA book about a human girl who saves an cat-like elf guy, deals with racism and magic and a prophecy
5
Sci fi book or short story about increasing IQ and gaining telepathic powers
11
Accident on space station orbiting pulsar kills human crew but cat survives it
6
A book where a man inhabits the body of a dying man and befriends a telepathic cat
7
Book of sci-fi short stories: purple and black cover with sorceress and cat
1
70s-80s sci-fi collection with aliens and a girl werewolf who may have eaten cats