When did the crack in Amy's wall re-open?

One of the major character background elements for Amy Pond's during her time as companion was the fact that she grew up with a crack in the universe in her bedroom wall. This forms the key plot element of the first series with Matt Smith. Eventually, this crack in her wall closes in "The Big Bang" as a result of

at which point we see it seal itself off.

However, about 10 minutes into "The Eleventh Hour", The Doctor closes the crack in Amy's wall by forcing it open, then allowing it to shut. He even explicitly points out "See, I told you it would close, good as new." as we see it appear to seal shut in the same manner as "The Big Bang".

So what caused the crack to re-open in that short interval?

While at little Amy's bedside, The Doctor says "The cracks can't close properly until I'm on the other side." I'm guessing that in The Eleventh hour, that crack hadn't closed all the way. It did, when The Doctor finally gives in. Also, there's an entire time-stream being re-written here, as the later events of The eleventh hour have never happened now.

The Doctor doesn't go through the crack in Amy's wall. He uses the exploding TARDIS to send the particles that are inside The Pandorica

(the ones that revived this Dalek) 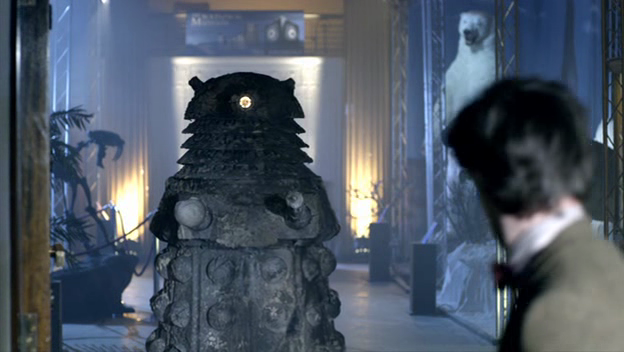 to every space and time at once. Thereby, using the explosion to rewrite everything back to the way it is supposed to be. However doing this trapped the Doctor inside the explosion which was sealed off by him repairing it.

22
The Cracks in the Universe: Why are they lethal to some, but not to others?
7
How did Amy survive the crack in her wall?
23
Who did the Doctor see in his room?
2
Was The Doctor talking rubbish?
7
Why did the Doctor have a sentimental moment at Amelia's bedside?
9
What created the Crack in Time?
7
What really made the Doctor want to take Amy with him?
5
Did Caitlin Blackwood appear in "The Time of the Doctor"?
5
How does the crack in time on Trenzalore still exist?
1
When did River Song tell Rory and Amy about the teselecta in "The Wedding of River Song"?