Of all the half-Muggles in JKR work, what is the percentage of those with muggle mother vs father?

As part of my digging into heritability of magic, I am trying to see if there's any difference between the chances of being a wizard with one Muggle parent if your mother vs. your father was a Muggle.

As far as I know, JKR didn't cover that explicitly, but we can at least make a guess based on statistics.

As such: Of all the half-Muggles mentioned by JKR (books, supplemental books, interviews, Pottermore) where we know who was a Muggle among parents, how many were Muggle fathers vs Muggle mothers?

To avoid creating an endless list of answers, if you can think of another example that wasn't tallied before, please edit it into an existing answer.

NOTE: this question uses "half-Muggles" instead of JKR's term "half-blood" because I only care about kids whose one parent was a Muggle; whereas in Potterverse, the "half-blood" term also applies to those whose second parent was Muggle-born magic user (such as Harry Potter).

Working from the list presented on the HP Wiki (I know it’s not canon, but I have sources!), we can split the magical folk who are half-Muggles into two lists.

I have drawn up this handy chart which summarises my findings: 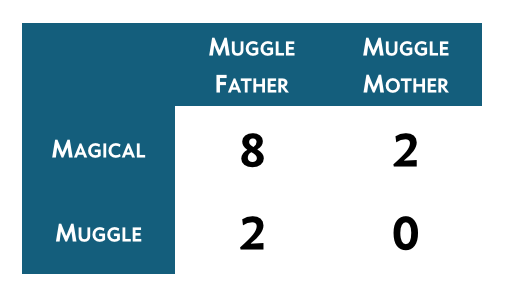 However, this only works off a list of named wizards and witches.

What we don’t know (which is just as important) is how many Muggles there are who have one parent who was magical. Only then could we say which parent plays a greater role in determining your magical ability.

It may be that no such individuals exist, as “magic is a dominant and resilient gene”. (JKRowling.com, Extra Stuff: Squibs) I would, however, be quite surprised if that were true.

My answer would be that there is no canon answer for this without extreme digging and extrapolation.

Nothing can be found on the wikia, Pottermore or from the books or from a interview(to my knowledge) that talks about a certain percentage.

Someone could however name all of the Half-muggles into a grouping and name which parent was a muggle and make a percentage from that. But that is all I know that would work.

My list(if I am wrong feel free to edit or downvote):

So saying this is all true, then the percentage of muggle fathers is larger than muggle mothers. Also, I consulted the canon where I could, but most of this is taken from the wikia, so reader beware.

And from that data you could make a percentage from that.

But if this is your answer I fail to see what it proves, sorry not a diss.

I used the wikia page above to compile this information. And since some of the info I did not know was right or wrong I added another list that I sure of is right and from the book. Some of the information might be from Pottermore that was on the wikia, but I cannot confirm this.

Dean Thomas- mother(He states in the Deathly Hallows that his father left when was little so he didn't know if he was a wizard or not. This makes it possible that he could be a muggle-born or Half-muggle)

From this though we can see that the father ratio is still higher than the mother, because there were basically no Muggle woman that had children with wizards.

Unless, you name the woman that was supposedly killed in Deathly Hallows after she said that she did know where someone was(I forget the details). But there is no proof that she was muggle or a squib. But the ratio would still be favoring fathers.

Well, there can be no definitive answer save J.K. Rowling making up an answer. If we assume that the growth of wizarding society follows the same model as real world societies- it is likely that there would be more mothers. As fathers can have any number of children all year long, women on the other hand can only (theoretically) have 2 children per year and therefore more are needed to sustain growth.

A second and more simple metric would be that almost all countries (with the exception of China) have far more females than males so the statistical probability would be in their favor (unless Rowling comes out and says there is a actual likelihood variable between genders).

3
How many Wizards/ Witches got into relationships with Muggles?
8
What do we know about Hagrid's father? Was he a wizard?

34
What Percentage Makes Someone a Half-blood?
4
Can a Muggle-Repelling Charm Be Broken?
0
Why Do Purebloods Call Muggle-Borns 'Mudbloods'?
212
How did Dumbledore, or anyone, know Lily had sacrificed herself for Harry?
22
Can any magic besides the Sorcerer's Stone or Horcruxes delay death?
30
How is breaking news reported in the Harry Potter universe?
15
Can Muggles give birth to a magic sensitive child similar to a Squib?
11
Can genetics explain the various magical abilities?
4
What is the definition of “pure-blood”?