Identification an apocalyptic short story from late 70s or earlier

This was asked of me by a friend, and I've been unable to help her, and it was suggested I try this forum - if anyone can place it, I'm sure she would be very grateful. Thank you!

I'm trying to track down a compilation of sci-fi short stories I must have read in the late 1970s:

One of the stories ( I'm leaving out some of the fruitier details ) involved a young couple getting together and renting a nuclear shelter from a middle aged lady as their home.

After a couple of days the alarm went off indicating a nuclear strike and they hunkered down for a long wait, wondering what might be left of the world they knew.

Gradually the cockroaches moved in and things became unbearable and they eventually began arguing; the young woman wanting to leave the shelter and take her chance above, the young man refusing to, and while the woman tried to open the hatch, he struggled with her and she hit her head and died.

It took the woman who owned the shelter a while to rid the place of cockroaches "this time", but having done so, she put up the "To Let" sign once more....... (gulp!) 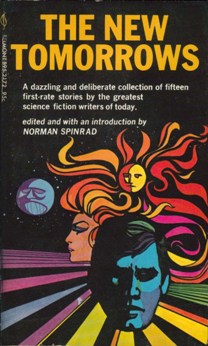 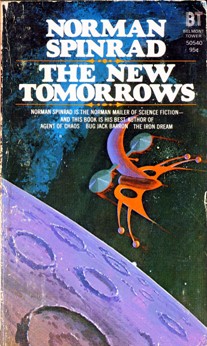 A guess: "Surface If You Can" by Terry Champagne

‘Surface If You Can’ by Terry Champagne: satirical tale of a couple of grad students who rent a bomb shelter from an absent-minded heiress. There is a surprise ending that makes this the best story in the anthology.

The story was published in a volume called "The New Tomorrows", edited by Norman Spinrad (covers for the 1971 and 1973 editions posted above), and has also appeared in the science fiction magazine, "New Worlds #192".

Does anything look familiar? The link below will take you to short overviews of the other stories that appeared alongside this one. Hope that helps.

~ Edited from The PorPor Books Blog

Edit. The originator of the question, in a comment, has requested "a sample of the text to the story in question." Here is the beginning:

Mrs. Amis felt a need. In spite of her health and wealth and elaborately equipped Bel Air mansion, she wanted to do-give-get something. So she placed an ad in the newspaper of the closest overcrowded university.

Here is the middle:

Allan pushed up on the hatch. It didn't budge. He pushed again harder.

"Hey, I can't get the door open." Puzzlement and caution in his voice.

Pam watched his efforts to open the hatch. Unconsciously, she turned her eyes to the dials they had stopped noticing.

Allan descended a few steps and looked at her.

"Mrs. Amis said this meter measures the outside radiation." She wanted to say more, but her voice vanished.

"Do you remember hearing an explosion last night?" he asked, as if it were the most important question ever asked.

"I sure wish we had bought that radio."

"I wish we had a window. I just can't believe it."

An unmeasured moment of time passed before Mr. Amis came to clean up. She had a devil of a time getting rid of the cockroaches and finally had to fumigate before she could run the ad again.

With her new tenants settling in, Mr. Amis could relax once again. Propped up on pillows, under thick blankets in a massive four-poster, she watched the maid depart. And pouring herself a cup of tea, she reached for the remote control and switched on the monitor, leaned back and relaxed.

16
Short story where a person's name defines their nature
10
Story About People Who Hide Out in A Bomb Shelter Under a Mall
8
Post-apocalyptic story in a world with no electric power
11
Short story: beautiful woman clones herself to avoid ageing but clone burns herself
8
Body swap (stealing) short story from the 60s (assumed)
7
Short post apocalyptic story about evil gang