Why is the “trilogy” made of five books?

I just completed the first book in the Hitchhiker's Guide series and started the second. Something I've seen written about the series is that it is a "trilogy of five", which taken literally is an oxymoron. Is there a reason why this label has been used? Was it intentional whimsy, or did "trilogy" just not for some reason get corrected when the later books appeared?

Obstensibly, Adams finished the books at Three, but later came back.

The novels are described as "a trilogy in five parts", having been described as a trilogy on the release of the third book, and then a "trilogy in four parts" on the release of the fourth book. The US edition of the fifth book was originally released with the legend "The fifth book in the increasingly inaccurately named Hitchhiker's Trilogy" on the cover. Subsequent re-releases of the other novels bore the legend "The [first, second, third, fourth] book in the increasingly inaccurately named Hitchhiker's Trilogy". In addition, the blurb on the fifth book humorously describes the book as "the book that gives a whole new meaning to the word 'trilogy'". ~Hitchhikers Guide to the Galaxy

It was a tongue in cheek way of describing the books, without going back on a previous statement, and fits very well with some of the nonsensical themes in the book.

@Pureferret has the right answer but the question is wrong.

For THHGTTG's 30th anniversary, part six of three, And Another Thing... was published. This book was written by Eoin Colfer since Adams was unavailable to write the book due to his being dead for biological reasons. 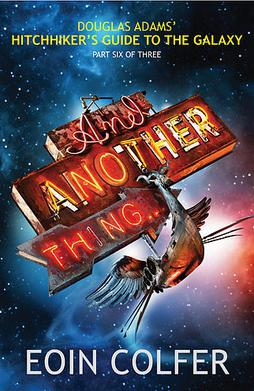 The name of the book is taken from So Long, and Thanks for All the Fish:

The storm had now definitely abated, and what thunder there was now grumbled over more distant hills, like a man saying 'And another thing...' twenty minutes after admitting he's lost the argument.

Not the answer you're looking for? Browse other questions tagged the-hitchhikers-guide-to-the-galaxy douglas-adams or ask your own question.

181
Why did Douglas Adams pick 42 as the ultimate answer?
18
How many appearances does Agrajag make in the Hitchhikers' Guide series?
22
Why was Arthur Dent surprised by Slartibartfast's name?
9
Is the Encyclopaedia Galactica in the Hitchhiker's Guide a reference to Asimov's Foundation Trilogy Encyclopædia Galactica or a tribute to Carl Sagan?
10
Why do some Betelgeuseians have two heads?
20
Do Dirk Gently and The Hitchhiker's Guide exist in the same universe?
17
What the zark is this all about?
9
Was Douglas Adams influenced by Lewis Carroll, with his '42' answer and others things?
19
How many people are the three billion watching Zaphod Beeblebrox?
30
How many books are there in “The Hitchhikers Guide To The Galaxy” series?