YA short horror story from the 90's? Student obsessed with teacher kills herself Cover art had a ghostly looking girl wearing fish necklace

I'm pretty sure the girl's name was Fern, and she becomes obsessed with her teacher. When he dies (I believe he drowns) she kills herself and haunts her best friend by tapping on her window. There's a fish (or at least I'm fairly certain it was a fish) necklace involved and the girls hide notes to each other in a tree hollow.

I would have read it in around 2000 and I don't think it was that old then, so I'm guessing the book was published in the mid to late 90's.

I'd love help finding this book! If anyone could even point me in the direction of the publisher.

I'm fairly sure there were a series of these short horror stories from the same publisher with different authors - I seem to recall one about a clique of vampires maybe at a high school.

The Mouth by Carmel Bird 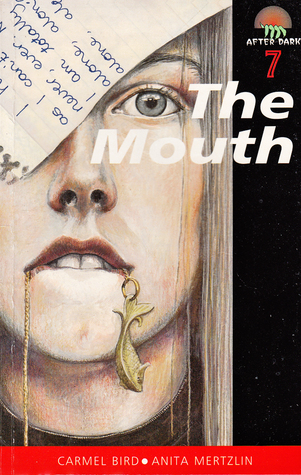 You can see the fish on the front cover.

Jade knows that her best friend, Fern, has died. Yet she can hear Fern tapping on the window every night - what is Fern's ghost trying to tell her?

It's part of the After Dark series.

Not the answer you're looking for? Browse other questions tagged story-identification young-adult horror or ask your own question.

16
A collection of stories about young monsters and vampires
7
Trilogy about a girl, dragons and Nicholas Flamel
11
Young Girl Fantasy Series (I think?)
3
80's or 90's teen horror book
5
Horror movie with two girls, one of whom is a monster who tries to kill the other in a pool
7
Searching For Horror Anthology Book Title
4
Girl finds new world in mere pool?