Was the significance of Arya's Braavosi coin ever explained?

Jaqen H'ghar gives Arya the iron coin, she can apparently give it to any Braavosi and say Valar Morghulis and that gets her where she needs to go, but why?

Where do these coins come from and what do they indicate to a Braavosi?

Yes, in the books,

Arya gives the coin to the captain of a ship from Braavos. The captain is astonished: "Valar dohaeris," he replied, touching his brow with two fingers. “Of course you shall have a cabin.”

The captain gives her free passage to Braavos, a cabin, and drops her off at the Faceless Men's temple. Also during the voyage many of the sailors and even the Captain ask her to learn and remember their names, and many seem afraid of her.

Based on this reaction, it seems the coin and saying are a custom that a Braavosi expects only from one of the Faceless Men, such as Jaqen H'ghar.

A theory is that a Faceless Man cannot kill one of his previous friends, or a person they know from their life before the temple. Therefore, the Bravosi are eager to help Arya in order to befriend her, so if she is ordered to kill them further on, she won't be able to. That's why they ask her to remeber their names.

It was a distinct coin, one which was associated with the Faceless men. It indicates to the Braavosi that the bearer is either a member of the society or a recruit on his/her way to join them. It is unclear where do these coins come from (Whether minted in the official Braavosi mint or in an exclusive FLM mint) but it is clear that the coins are used exclusively by the members of the society.

It is also unclear that what exactly do the Braavosi get by serving the members of the Order. However it seems to be deeply rooted in the City's culture and traditions. Now let's look at the evidence:

a piece of iron no larger than a penny and rusted along the rim. One side had writing on it, queer words she could not read. The other showed a man's head, but so worn that all his features had rubbed off.
A Clash of Kings - Arya X

I always interpreted it this way that while Arya thinks the facial features are rubbed off because of the coin's age, the man never had a face at all. It was a Faceless man.

"A coin of great value."

Arya bit it. It was so hard it could only be iron. "Is it worth enough to buy a horse?"

"It is not meant for the buying of horses."

"As well ask what good is life, what good is death? If the day comes when you would find me again, give that coin to any man from Braavos, and say these words to him — valar morghulis."
A Clash of Kings - Arya IX

If it was just any other piece of Braavosi currency and not a special coin used exclusively by Facelessmen, how would the Braavosi understand what is it and what does the bearer want? Of course one could argue that the coin and the words together would make the coin special but that's evidently not the case as the Braavosi captain immediately realized what the coin was.

"Wait," Arya said suddenly. "I have something else." She had stuffed it down inside her smallclothes to keep it safe, so she had to dig deep to find it, while the oarsmen laughed and the captain lingered with obvious impatience. "One more silver will make no difference, child," he finally said.

"It's not silver." Her fingers closed on it. "It's iron. Here." She pressed it into his hand, the small black iron coin that Jaqen H'ghar had given her, so worn the man whose head it bore had no features. It's probably worthless, but . . .

Jaqen said to say the words too. Arya crossed her arms against her chest. "Valar morghulis," she said, as loud as if she'd known what it meant.

"Valar dohaeris," he replied, touching his brow with two fingers. "Of course you shall have a cabin."
A Storm of Swords - Arya XIII

"Why would you wish to fight? Are you some bravo, strutting through the alleys, spoiling for blood?" He sighed. "Before you drink from the cold cup, you must offer up all you are to Him of Many Faces. Your body. Your soul. Yourself. If you cannot bring yourself to do that, you must leave this place."

"—has paid your passage here. From this point you must pay your own way, and the cost is dear."
A Feast for Crows - Arya II

The theory however that the Faceless Men can't kill people they knew before they became members of the society however seems wrong. Jaqen H'ghar told Arya that he would kill his own father if Arya knew his name.

"Anyone?" she repeated. "A man, a woman, a little baby, or Lord Tywin, or the High Septon, or your father?"

"A man's sire is long dead, but did he live, and did you know his name, he would die at your command."

So as evident, it was a special coin used by the Faceless Men. We see two uses for it:

That's all of its significance that we know of.

Valar morghulis (all men must die) is the motto of the Many-Faced God and his followers which are assasins.

Spoiler for the TV series, already happened in the books:

The coin together with the quote allows Arya to get passage to Braavos and entrance into the temple of the Many-Faced God.

A coin of significant value which allow holder to reach temple of faceless god and only there. Remember Arya first told the captain to take her to nights watch but captain refuses.

The significance of the coin is that it is not really a "coin" at all... meaning a medium of exchange holding an intrinsic value. Instead it is a "recognition token" signifying membership in an elite and secretive assassin's guild. Think mafia hit-men crossed with ninjas and throw in some 007 and a little majick. Arya of course does not know any of this, she just thinks it's a worthless coin at first... and so the ship's captain must have been peeing himself while thinking... "THEY'RE USING LITTLE GIRLS NOW!!!"... because everyone now assumes that she's an assassin. The coin is iron because that is the lowest value metal... the value of the coin is explicitly NOT in the metal, but in the fact of the bearer holding it. We can presume that they are made by the Faceless Man organization and handed out as field equipment to operatives. Note that Jaqen had been searched and in chains when he first gave the coin to Arya. This tells us that the coin must be small, so that he could have kept it hidden from searchers. She first believes the coin to be very worn, which is why she cannot see the face of the portrait... but later realizes that it is not so worn after all, and the vagueness of the face is part of the design. This tells us that it must be a FACING portrait... because a profile remains recognizable even when badly worn. Shire Post Mint makes just such a coin under license with George R.R. Martin... and George carries them around to cons and movie sets and hands them out to people.

It appears as though the coin is special and comes from the House of Black and White. In addition to the book answer over there the show also appears to use different props for the Braavos coins to the one Arya is given. 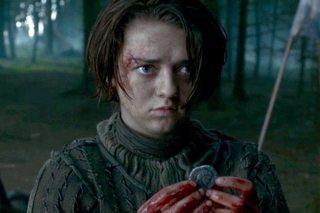 Arya with her coin.

And in the following video around the 2:05 mark you see some coins on the table:

Obviously these could be different amounts but the design seems totally different and in currencies there is usually some consistency.

The coin then appears to indicate that the person wielding it, along with the phrase "Valar Morghulis", is either from the Faceless Men or needs transport to their location. This is witnessed when the Braavosi captain gives Arya passage to Braavos just from showing the coin and stating the phrase:

24
Does Arya know what "Valar Morghulis" means in 'A Storm of Swords' when she gives water to northmen?
18
Why didn't Arya use Jaqen's three deaths more fruitfully in the TV series?
22
Who/what is Jaqen?
21
Valar Morghulis, Arya Stark and Daario Naharis - Connection?
30
Why did Jaqen H'ghar give Arya the iron coin?
7
What is the relationship between Arya,The Waif and Jaqen?
37
Why would the Faceless Men let Arya go?
10
Why does the Waif believe Arya did not earn her coin?
7
Does Arya purposely lead the Waif into a trap?