Where is the room that bridges the two universes located?

Possibly related, some of the promotional images for season 4 include a mysterious shiny round object, which I'd assumed was a hint of what the bridge room looks like from the outside: 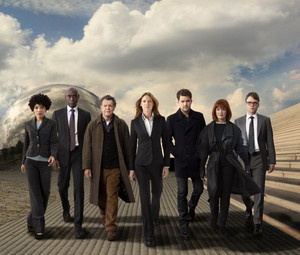 You are correct about where it was in the "real" timeline in Seasons 1-3.

However, due to the events of that season finale, things have shifted around. I don't recall it being explicitly stated where it was put together in the Season 4 timeline, however, it appears to me to be adjacent to Fringe Division's offices.

Editing my answer with information from 4x18:

The bridge in Season 4's Over There is on Liberty Island. Since the only difference in its activation seems to be that Peter wasn't there, the two machines in this timeline are almost certainly also in the same location - so both would be at Liberty Island, and Fringe Division's offices are nearby, but not adjacent.

Based on the last episode of S3, where we see Peter exiting the machine, I believe the Bridge Room is adjacent to where we last saw the machine, which was in New York, close to the Statue of Liberty.

In Season 4, it's also implied that Massive Dynamic has provided security and support services, so that's another indication (to me) that it's in NYC.

12
Who joined the two universes?
12
Why are there only 2 universes that are visitable?
5
What did the ZFT warn about?
15
Why are the two universes in Fringe not more divergent?
10
What is the oldest difference between the red and blue universes in Fringe?
1
Question about the Machine Room bridge in "Fringe"
1
How was Olivia powering the collision of the universes?
6
How did Walter send back the Machine in the Amber Timeline?
37
Movie with two parallel universes, each of which is a television show in the other's universe