I read a fantasy novel that was implied to be part of a series around 20 years ago (was part of my high school library, not certain how old it was then). I don't remember the title or author, or admittedly large portions of the plot (or maybe it was just a disjointed book), and would like to request help here.

These are the elements I remember:

That's what I got. Any ideas?

Might it have been Greg Bears "Songs of earth and power"? 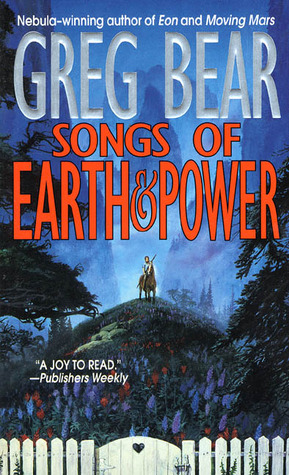 The Song of Power opened the gateway to the Realm of the Sidhe, allowing young Michael Perrin to slip through. Now Michael faces years of captivity and deadly struggles for the future of the Realm and of Earth--leading finally to a terrible confrontation on the streets of Los Angeles, with the soul of humanity at stake.

Weaving the power of music, poetry, and myth into a headlong narrative of nearly overwhelming intensity, Song of Earth and Power is one of the most original fantasy epics of our time, a vast tapestry of relentless suspense, terrible beauty, and brilliant imagination. Originally published years ago in two parts, it now returns in a new edition rewritten by the author and published in a single volume as he originally intended. Wrote Analog on its original appearance: "A delight....A vision of Faery that may owe a bit to a wish to do it right. Read it."

6
Book with people called the Sidhe
1
Trying to find the title of two different books. Both fantasy