I have been trying to find a cartoon I watched as a kid. It was shown on Sky Movies (UK) in 1989 or 1990 in the kids cartoons slot on Sky Analogue. It featured a team of four characters, possibly starting out in a spaceship, that land on a planet. The planet was empty except for sand and various buildings. There were one or two giant (70ft or more) oval shaped robots that the characters were hiding from. The robots were primary colors (red and blue I think), with heads that turned constantly looking for the characters. It was anime in appearance (certainly looked different from the Danger Mouse/Hanna Barbera cartoons that were usually shown on TV at the time) with lots of fast paced running sequences. One of the main characters had a cigar that stayed in the air when he spoke (shouted really). Any ideas??

Thanks to finding another person who asked for an ID of an anime matching yours on Quora.com, Looks like I managed to locate it.

Birth aka Planet Busters aka The World of the Talisman(1984).

It is based on a far futuristic planet where four mercenaries try to find the ultimate weapon which can either save humanity or destroy it. Against mechas and strange races, together they sweep the vast planet to reach their goal.

Aqualoid was a prosperous planet, but an attack from a mysterious life force, the Inorganics, transforms it into a post-apocalyptic shell of its former self. When Nam finds a mysterious sword, he is suddenly the object of a planet-wide chase. With the Inorganics closing in, will Nam and his friends discover the secret of the sword and save their world? Or will they destroy Aqualoid in favor of a new Birth?

It follows the lives of brother and sister Namu Shurugi and Rasa Jupiter whose peaceful existence on the planet Aquaroid is destroyed by an invading android race known as the Inorganics. During their battle for survival the two meet Bao and Kim two treasure hunters seeking a legendary Talisman which is hidden somewhere on the planet and will bestow the owner with godlike powers. The four of them are chased across the planet by the unrelenting Inorganics and eventually it is revealed that there is more to this simple quest than it first seemed.

Picture of the four leads- Bao Luzen (far left) has the cigar: 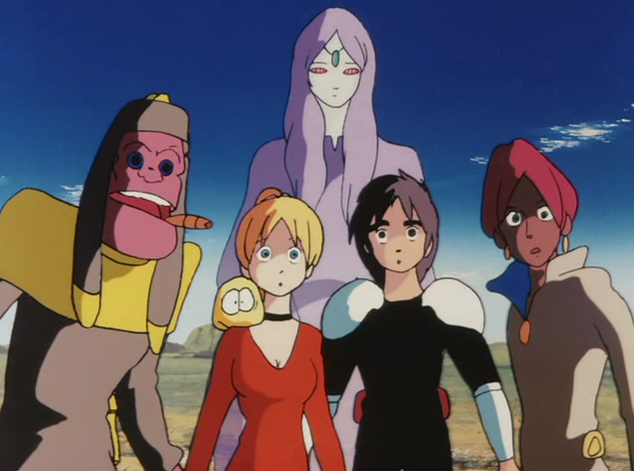 Youtube upload of the whole movie in 6 parts:
Part 1
Part 2
Part 3 (there's a green bot here, and the red and blue bots are "activated" at the end)

10
Animation film with giant sphere-like bad "robot"
3
Looking for the title of an anime movie I saw in the 80s
3
Old anime show with pirate, princess, and boy
6
Anime from the 80s that had what I can only describe as giant mech orbs that turned into robots

19
Children's science fiction show with two robots on a planet of junk
7
Mecha anime with giant robots summoned from sky, water and earth
13
Looking for an older anime floating crosses/people? Over earth
4
Anime film with giant robots
7
Anime/cartoon with kids battling with robots in a game
7
Anime/Cartoon with a Giant Police(?) Robot
15
Anime style movie about mutated people that gain murderous abilities such as projectile-shooting limbs and limbs with blades on the ends