In the 1990s, I checked out a book from my local library about an alien invasion. I think it was misfiled, because it was in the non-fiction section.

The book was designed in such as a way to make it look like a classified document that was transcribed. There were markings like "eyes only" and "classified" on it.Full of diagrams and black and white drawings, and fake military looking insignias.

In the book, several alien species were described.

The main bad guys were known as "The Blight", who were small creatures led by a queen. They had a weapon called a "Skeletal Disintegrator". They were supposedly susceptible to bacteria, demanded extreme cleanliness, and were very weak against high volume or intense sound waves. In the end, they were defeated by using a radio telescope to beam sound waves toward their fleet - and the technician in control accidentally inputted the late show or something instead of the intense sound developed by scientists, but it worked anyway.

They also controlled alien spies called the "Aerie" which were just like classical fairies, and they were a subjugated race.

During the tour of space described by the narrator, they flew past a steampunk ship piloted by the "Body Electric" race. The narrator also flew past the planet - get this - "V-8" inhabited by "mobile vegetable lifeforms". These two things were illustrated.

Thats all I can remember, It was was early 90s. It was very absurd, but id still like to find a copy!

Thanks if you can help me, and everyone have a good day!

Per the asker's comment above, this title is The Extraterrestrial Report by Richard Siegel, published 1978. 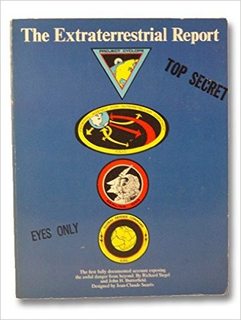 From a review on Amazon:

This supposed "report" about alien contact begining in the 40's and coming to a head in the late 70's is more farce than fiction. Instead of using the tried and true method of writing an SF novel, Siegel and Butterfield, along with designer Jean-Claude Suares, put together something that looked real enough to make you think twice at first glance. Upon closer reading, however, you notice the little touches that only the Sf fan could provide - a reference by then President Carter (in a faked memo) to someone beating the Wildfire team at flag football or the visiting aliens wanting to take TV personality Robby the Robot back to their home planet. A curiousity at best but hard to find intact as most of the trade paberbacks from the period have bad glue that has gone brittle and pages fall out all over the place. Worth a look if you can find one.

4
What short story has an “alien” invasion described point-of-view-style, where the aliens are revealed to be humans?
9
Earth occupation/invasion book I read in the 90s
1
Book about humans as mercenaries for an alien. NOT Nuttall book
8
Book about an attempted alien invasion
11
Searching after a science fiction book/series about Galactic war with a weaker Human/Alien Alliance vs. Another hostile alien race
26
Sci-fi book about humanity barely winning a war with an alien race, after which the protagonist discovers some secrets about the conflict