I don't remember exactly when I played it... within the last decade and a half. It was a game that I played online in a browser, almost certainly in Shockwave Flash. I'm almost entirely certain it was more than 5 years ago. It had a fairly plain drawing style, looked like it might have been drawn using Paint or a similar program. You are a ghost who can't quite remember how you got where you were. I remember that scenes involved a playground and a church, and at one point you confront the ghost of someone who died in a fire and they're rendered as animated flames. I don't think you ever get to interact with the living directly, but you do interact with other ghosts.

The climax of the story has you watching over a young woman, maybe a teacher, and trying to protect her from a serial killer. I think said killer had some sort of standard occult symbols drawn around the apartment.

Only other thing I can remember distinctly about the game is needing to fetch a set of candles to do a ritual.

I think this could be The Dead Case. You are a ghost investigating your own murder. I found a fiery ghost inside a church. The art style is line-drawing-esque. According to the walkthrough at Jay Is Games, a) you definitely have to collect candles for a ritual, and b) in the ending, you are saving a woman from being murdered (although I'm not sure if she was a teacher). 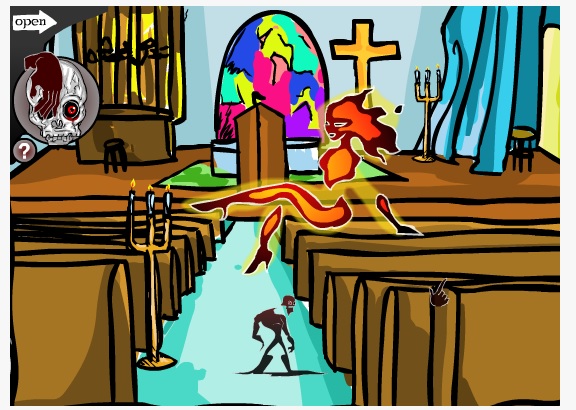 Not the answer you're looking for? Browse other questions tagged story-identification video-games ghost or ask your own question.