I'm trying to remember a movie. The only thing I remember clearly is that there were modern explorers in a land or time that resembles ancient Rome or Greece.

At the end of the movie during a disaster there is this young woman who enters a chamber or something with flames and when she comes out she is old and dies. The "modern explorers" looked like from the 50's.

story-identification time-travel time
Share
Improve this question
edited May 7, 2015 at 20:29

This may be the 1965 movie adaption of H. Rider Haggard's She, starring Ursula Andress.

from the IMDB page:

After doing military service in the Middle East, British archaeologist Holly, his valet and his handsome young friend Leo are spotted in Palestine and approached by a mysterious oriental who identified Leo by his uncanny likeness to the portrait on an ancient coin. An adventurous search for the lost Pharaonic city of Kuma proceeds relying on a recently-acquired map. Their hasty mini-expedition reaches a hidden city where the Hellenistic age is still alive. It is ruled by the supernatural Ayesha, 'She who must be obeyed', who believes Leo is is the reincarnation she waited for all those centuries of Callicrates, a companion of Alexander the Great. She offers him immortality and to share the throne as her eternal love, but it goes tragically wrong...

It's a largish image, but here's some thumbnails of She aging in the fire: 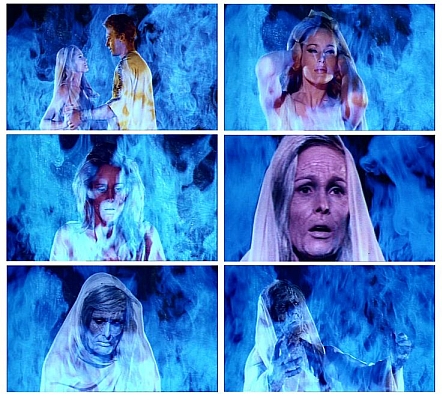 Not the answer you're looking for? Browse other questions tagged story-identification time-travel time or ask your own question.

8
Made-for-TV Nickelodean movie with a group of young teens and one adult
14
Man is piloting small cargo ship with young woman stow-away
6
Looking for a TV Series from 2006-2010
3
90s(?) Movie where young boy's virtual girlfriend becomes real
5
Movie with "White box dimensions" where woman is shot at the end
7
Movie called "Predator" or "Predator 5" with Predator-like creatures inside of people
14
Novel where a woman and her car are transported back in time to ancient Rome