Do the human beings in the crop of humans maintained by the machines develop typical illnesses, such as the common cold or the flu? Since each person is confined to their own sealed pod, many routes of infection could be cut off. However, we do know that the dead are liquified and fed intravenously to the living, and so unless the machines carefully filter this material, this could be a vector for infection. Also, there are degenerative diseases in which infection does not play a role (or at least not an obvious one).

On the other hand, do digital personas in the Matrix develop such illnesses? This would seem to be part and parcel of the intentional imperfection of the Matrix.

Taking this together, here is what I am asking:

I think this is a yes and no answer.

This is conjecture, as the details on how humans are 'grown' is scant (see this page). Assuming that 'grown' means that rather than through natural reproductive methods a technology such as IVF is used to artificially grown humans, errors in the genetic construction of humans would occur, leading to genetic diseases. As there is a strong link between one's 'real' physical self and one's residual image, it is expected that if one had a genetic defect, one would probably show signs of that illness within the matrix.

Regarding chronic diseases without a genetic basis, one cannot deny the power of the mind within the matrix. If people live lifestyles that would in reality lead to developing a chronic disease, then it is probable that they would indeed develop that disease. Remember that Smith said that this version of the Matrix included suffering because it is essential to humans to accept the matrix as reality. On that basis, it is highly likely that one's actions have consequences so, with that being said, the development of chronic disease from actions within the matrix probably would have consequences within the matrix as well. Getting a little sidetracked from the original question I know, but I thought I'd add it in!

Infectious diseases, in terms of a real disease probably cannot occur. Consider the following extract from the Matrix Wiki page on Earth:

Life has proliferated over billions of years, until the sky darkening operation in attempt to block the energy source of the Machines. Eventually almost all life became extinct, resulting in a mass extinction bigger than the one that occurred during the Permian. (Source)

Now, this is conjecture, but if most of life has been eradicated, then the possibility of contracting an infectious disease would be pretty low, as bacteria need something to live on and it seems that Earth mightn't have the capacity to sustain such life anymore. Furthermore, the capacity to transmit diseases from one human to another in the real world would be severely limited by their isolation. As pointed out in the question, it is possible that someone with an infectious disease who is used for food for other humans could transmit such a disease. It is not unreasonable, however, to expect that there would be some filtering system, as it would be to the machine's disadvantage to foster an environment where infectious diseases could be spread.

The above addresses your first two questions as yes.

On the third question as to whether medical treatment within the Matrix would have any impact upon the physical body, I see two solutions. Either:

Treatment for infectious diseases would be possibly effective, depending on what was administered, but a placebo effect would be more likely to be used to get the body to fight it off by itself. On the other hand, if the body hasn't been exposed to many antigens then the immune system would probably be abnormally weak by our standards so some external intervention would probably be required. In the case of chronic and genetic diseases, treatment options (to the best of our current knowledge) are far more limited, so there mightn't be as much to work with there.

Considering that damage to the body within the Matrix causes damage to the body outside the Matrix, we shouldn't dismiss the placebo effect. It is highly plausible that the effects work in reverse as well i.e. if one believes completely that one is receiving the best treatment possible for an illness, the mind may make it so the body repairs itself completely.

Do the human bodies plugged into the Matrix develop illnesses?

The real human bodies are isolated in their pods, so it is probably impossible for the real bodies to be infected with a disease. Even if a real body was infected, the only time another real body might come in contact with fluids from the infected body would be

It is probably one of the responsibilities of the Docbots to screen any fluids transferred from one real body to another and thus prevent infection. Furthermore, opportunities for infection would be so rare anyway that any infectious organisms left in the real world would die out (and most would have already died out as a result of the destruction of the real world from the Machine War).

There's no reason, though, why a real body couldn't develop some non-infectious diseases. Such diseases would probably have to be due to aging and/or genetic causes (such as cancer). Non-infectious diseases which are caused at least in part by unhealthy lifestyle practices (such as heart disease) would be less likely to occur since the Docbots presumably keep the real bodies in good health.

Do their digital projections inside the Matrix develop illnesses?

It is very difficult to find examples of people developing illnesses in the Matrix and/or going to doctors, but I've found one case: in the video game The Matrix: Path of Neo1, Neo rescues a potential called The Healer.2 The Healer mentions the existence of illnesses:

In the same sequence, there is a newspaper with a headline that a girl (The Healer's daughter) was miraculously cured: 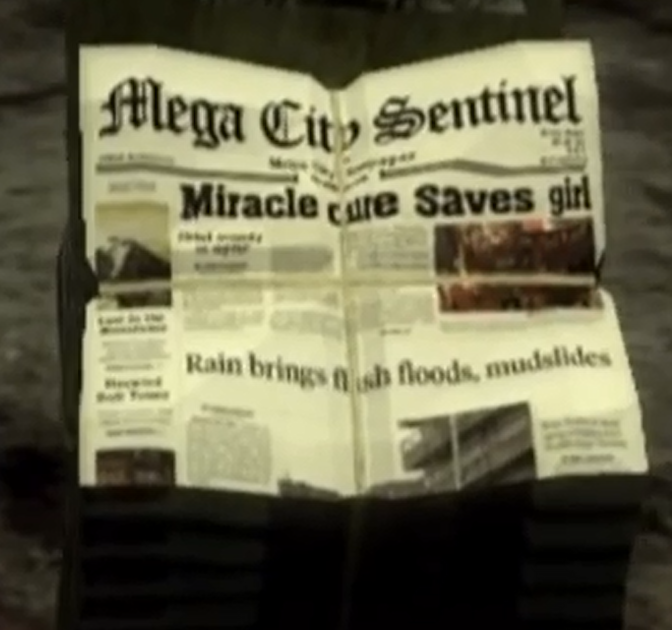 So humans in the Matrix can develop simulated illnesses and can be cured of them.

Do illnesses of the actual body present themselves within the Matrix? Would seeking treatment from a medical doctor in the Matrix have any effect on the actual illness, or would any such treatment be a placebo only?

The person may or may not feel the symptoms of the real disease, but any treatment in the Matrix would be no more effective than treatment administered to the real body.

If, however, the machines hide the real symptoms from being perceived in the Matrix, the person probably wouldn't know that his real body is suffering from disease because he wouldn't feel any symptoms -- at least until his disease had progressed to the point that it was about to kill his real body, at which point his symptoms would become so acute that he would feel sick.

1This game was developed with input from the Wachowskis and follows the "Path of Neo" through the three films very closely, so it is canon (with the exception of the changed ending).

25
Why Did Neo Think His Powers Would Work Outside the Matrix?
12
How big is the Matrix?
9
Matrix Reloaded - How did the message from the Oracle get out of the Matrix?
9
Memory control in the Matrix
14
Beer ad in The Matrix
38
Was Switch intended to be a different gender outside of The Matrix?