Help me identify a story about a Jewish ghost and a ventriloquist?

I remember that a ventriloquist finds a ghost, maybe on a train, and the ghost becomes the ventriloquist's other voice, for the dummy.

At the end, the ghost leaves, and the ventriloquist says something like 'But how will i do my act?' and the ghost says 'have you looked in the mirror while talking recently? You don't move your mouth.'

The Entertainer and the Dybbuk by Sid Fleischman involves a ghost of a Holocaust victim aiding a young GI in his ventriloquism act in an effort to get to the Nazi officer responsible. Here's part of a review:

World War II is over and Freddie, a young ex-soldier, is trying to make his living as a ventriloquist. The only problem is that he isn't that good at throwing his voice without moving his lips. This situation is quickly solved when he suddenly finds himself possessed by a Dybbuk, a young Jewish ghost named Avrom Amos who was killed by an SS officer during the war. Avrom wants revenge on those who killed him. He also wants people to remember the terrible fate that came to the millions of Jewish children just like him. And who better to use than a man who stands up on stage in front of crowd with a dummy to speak for him? 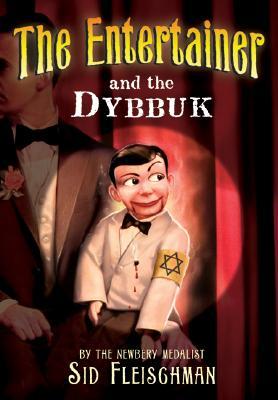 The part you're remembering is two chapters from the end:

"Almost, yes. Have you looked in a mirror lately, Professor? I see you are now talking without moving the lips."

The last sentences are actually:

12
I need help identifying this 90(?)s TV show and episodes
4
Anime movie about a boy in a ghost town
9
Identify a short story with a professor and matter dispersion device
9
Help identify a modern fantasy short story
7
Short story about the last train
9
Please help identify a short Sword and Sorcery story about a city of torturers
9
Ghost story set in 1930's rural America
8
Book about a teenage boy who helps ghosts stop a poltergeist and they help him win at football