What's the deal with "marshmelons"?

In Star Trek V: The Final Frontier, Kirk, Spock, and McCoy enjoy some quality time together around the campfire, musing about life, death, baked beans, and rowing boats gently down streams.

In particular, they have the following exchange:

KIRK: What are you doing?

SPOCK: I am preparing to toast a marshmelon.

McCOY: Well, I'll be damned. A marshmelon. Where did you learn to do that?

SPOCK: Before leaving the ship I consulted the computer library to familiarize myself with the customs associated with 'camping out.'

McCOY: Tell me, Spock. What do we do after we toast the marsh — er, melons?

SPOCK: We consume them.

McCOY: I know we consume them. I mean after that... 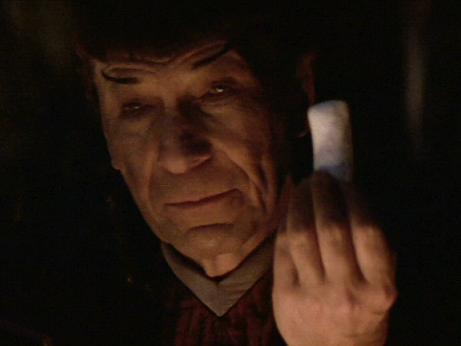 Unless I am wrong, "marshmelon" does not seem to be an alternate name for "marshmallow", at least not traditionally.

In contemporary times, the word does appear to exist, for instance in the form "Marshmallon" in Yu-Gi-Oh!, but these instances are strictly post-Star Trek V.

In the exchange, McCoy is about to say the correct term, "marshmallow", but stops himself and says "marshmelon", emulating Spock. I am tempted to think that Spock made a genuine error — one that McCoy found funny. However, Spock is not known to make errors and always chooses his words carefully. Indeed, in the preceding film we are reminded of Spock's mental prowess and precision:

McCOY: He [Kirk] means that he feels safer about your guesses than most other people's facts.

All of this leaves me with a question:

Why did Spock say "marshmelon" instead of "marshmallow"?

Was he referencing some archaic or less common form of the word? Is it a 23rd-Century term for it? Did he simply make an error?

(Just to clarify, I am seeking an in-universe reason for how Spock arrived at this particular word. Out-of-universe, the fact that the scene was inserted for mild comedic relief is clear to me.)

It seems that Spock mis-pronounced the word

A search on Memory Alpha and Beta shows there is no such thing as a 'marshmellon' referenced elsewhere on those sites.

As further evidence for this, considering the following:

In the 23rd Century, they have a marshmallow dispenser.

The Memory Alpha page for Marshmallow (yes, that is a page surprisingly enough) indicates that:

In J.M. Dillard's novelization (and in the original script William Shatner contributed to) Doctor McCoy played a practical joke on Spock, reprogramming the computer to display "marshmelon" instead of "marshmallow". Although this wasn't filmed, the error in Spock's pronunciation and Doctor McCoy's delight in it are evident in the movie.

Considering the quote from the transcript where McCoy stumbles over the word, that indicates to me that he was enjoying the joke he had played on Spock, as pointed out in the above quote!

I also suggest you read Richard's answer below which explains that, according to the novelisation, Spock intentionally mispronounced the word.

Spock didn't mispronounce the word, he was playing a practical joke on Bones.

In this instance Memory Alpha seems to be in (slight) error. In the official novelisation, it's made clear that Spock was very well aware that the file had been tampered with (by Bones) and chose to play along, intentionally mispronouncing the word for his own amusement:

"Indeed." The Vulcan paused. "I trust your grandfather was a better farmer than you are a programmer, Doctor." McCoy's blue eyes widened as he attempted an expression of complete innocence . . . and failed to achieve it. "Why, Spock, whatever do you mean?"

"The computer program. When I attempted to access information on camping out as you clearly surmised I would, the data revealed a number of most interesting errors...such as the term "marsh melons." The next time you attempt such a practical joke, Doctor, I recommend you take the time to also alter the cross-index files."

Both Jim and Spock raised disbelieving brows at that. "You know me. I don't know a dad-blamed thing about computers. I paid one of the engineering maintenance workers good money to do it." McCoy grinned wickedly. "Sounds like I better ask for a refund." "You're incorrigible," Jim told him. "Me? What about Spock? He's the one who dragged this out, pretending to play along!"

Marshmallows are a human food and not one that you eat often, likewise it's not everyday that you go camping (especially when you are own planet consists mostly of deserts and mountain ranges). It's quite likely that Spock has never gone camping before and so it's only natural that he would do some background research on the customs and traditions associated with camping.

However, McCoy predicted this in advance and had the computer files changed on purpose to trick Spock and get a laugh out of it. The word 'marshmelon' itself is entirely made up by Bones for the purpose of the joke.

Not the answer you're looking for? Browse other questions tagged star-trek terminology food the-final-frontier or ask your own question.