Did Indiana Jones affect the outcome of Raiders of the Lost Ark?

Amy in Big Bang Theory explains to Sheldon that:

The Nazis would have followed the same path to their failure with or without Indiana's interference.

But is this really the case? It looks as though they may have struggled to find the ark without the medallion. Perhaps they'd have never found it.

Is there anything conclusive (and not speculative) that shows he was or was not needed to advance the plot to its conclusion?

The outcome, no. The aftermath, yes.

First off, it's worth noting that although the Germans were digging in nearly the right place when Indy arrived, he'd denied them the medallion which meant that they were several hundred metres out. This presumably would have slowed them down by at least a few days. 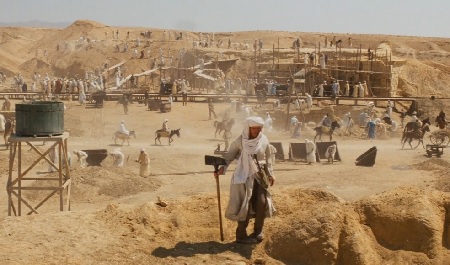 Although it's arguable that Indy then helped the Germans to locate the ark several days early, he then delays the Germans for at least a couple of days by temporarily gaining possession of it. Basically after having achieved nothing of substance, it ends up being loaded onto the submarine and taken to the island, exactly as would have happened had he not been there.

Indy then further delays the ark from being opened for several seconds (by threatening it with a bazooka) before it's taken to the altar.

That's literally his entire contribution prior to it being opened. Obviously as "last man standing" once the ark was activated, he's then in a position to take possession of the ark which is clearly a big win for the good guys. Had he not been there, and since it's a secret German base, it's probable that the German army would have eventually come looking for their missing submarine and taken the ark back into their possession.

Indy's goal, and the goal in the story, was to gain control of the Ark of the Covenant and prevent the Nazis from using it either as a weapon or for propaganda. While he is thwarted in this at almost every point in the movie, and, up until the last few minutes, everything he does is undone by the Nazis or Belloq, let's look at what happens after the climax of the story.

After Belloq opens the Ark and unleashes climatic and catastrophic events, Indy and Marian are spared (because they are innately good or because they closed their eyes, or some other reason we never learn). At that point Belloq and all the Nazis with him are gone. But Indy and Marian are still on an island with a German submarine base. Supposedly there would still be members of the submarine crew and the base crew who were not with Belloq and were manning the base and the sub.

We don't know if it was easy or difficult, but Indy is able to take the Ark from where it was, successfully transport it back across the desert, and still arrange to get it back to the United States successfully. At the end we see the Ark in a warehouse in the US (or some English speaking nation), out of hands of the Nazis and in storage.

So up through the climax, Indy had no effect at all, but after that, we have evidence he did achieve his goal and, ultimately, keep the Ark out of Nazi reach and control. We don't see how he did it and it could have been something as simple as signalling an Allied ship to get transportation off the island or as difficult as disabling the Nazi base and commandeering the sub and taking it, with only Marian's help, back to Allied territory.

Indy had a big role in the film, if he wasn't there, Marian would have died. Also like others have mentioned he made sure the ark was put in a safe place (even if he wasn't keen on the display nature of it), even if the Nazis took it to their homeland. Possibly millions could have died either in Germany or if Hitler knew more about the Ark then people of the world. Which is the point of a hero even if they are bad people no one deserves to die (unless its a small number where its life and death for survival as he shows in the film... think of James Bond with that licence to kill.. Its that hero decision to try and let no one die unless absolutely necessary . Spider-Man Superman have extra power so they are more able to follow this whole not kill, but indy is just human like James bond so increasingly gets difficult, batman being the exception as he has pots of money for tech and gear

You have also got to see that he was trying to prevent the Nazis from finding it by taking the medallion; I see it as he was just caught but he was only trying to do it on the sly.

What Amy said in Big Bang theory is totally off the mark they just wrote it in to get laughs, it was her opinion which obviously is wrong, Sheldon should have mentioned my points but he didn't.

There are a lot of hypotheticals in the whole "is Indy necessary to the progression of the story". Did the Nazis know of Marion before Tot followed Indy? If they did, how long before they found her and got the medallion? If they didn't, it's pretty safe to say the story would stop right there. So, Indy does basically start off the whole progression of the story. Also, his involvement saves Marion and only "gives" Tot only one side. Even with that one side, it's safe to say they would find the ark eventually, after digging enough. Then they'd test it somewhere and probably die. So for the Nazi's getting the ark, he's hypothetically unnecessary. But because Indy is such a good archeologist, he aided the Nazis into getting the ark much faster than they would have originally. His involvement does eventually keep the ark out of Hitler's possession.

Several things are likely to have not happened had Indy not been there. For example: The Nazis would not have followed him to Nepal to take the medallion from Mariane. However, given enough time, the Nazis would have eventually found the Ark. Originally though, however, the plan was to fly the Ark to Berlin to be opened for Hitler on a plane that was destroyed by Indy originally. From there, it would have killed Hitler and stopped WW2 from happening. Other events are unpredictable, however, but overall, the Nazis would have still died, making Amypartially right.

I was just wondering about this myself last week as it was on TV. As far as I'm concerned they only "discovered" the medallion from following Indiana to Marion in the first place. In the initial conflict there, they only ended up with a "copy" of half of it and were looking in the wrong place for the ark. If they had known about the medallion they would have moved in on Marion before Indy even got involved.

Not the answer you're looking for? Browse other questions tagged indiana-jones raiders-of-the-lost-ark or ask your own question.

19
How did Indiana Jones get the Ark of the Covenant off the island?